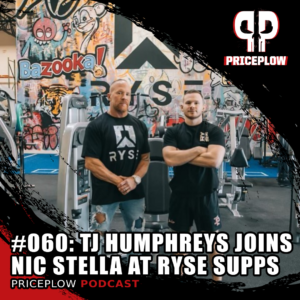 In Episode #060, we learn that TJ Humphreys has joined Nic Stella at RYSE Supps, and they have new flavors (Smarties and Bazooka) as well as an energy drink (RYSE Fuel) coming!

Our first podcast of 2022 came with some excellent news: TJ Humphreys has joined Nic Stella at RYSE Supps. Many supplement industry veterans know TJ from his days as CEO and owner of ProSupps, but now he’s taken on a leadership role in Dallas, TX as President and Partner.

From a distance, TJ has been watching RYSE Supps punch its way into the space and then become a best-selling brand at a top retailer in the country (Vitamin Shoppe). This follows previous power moves where creative superstar Greg Helton also joined RYSE as VP.

In this episode, we first introduce TJ and then have him talk about his background. After that, we discuss the new stuff coming from RYSE (which includes an energy drink!), and then get into distribution and RYSE’s incredible social media strategy that’s taken them to the next level.

Video and audio versions are below, and then more details after that:

TJ’s been in the industry for over 20 years, starting at Lone Star Distribution (which was subsequently merged with Europa Sports). He started ProSupps in early 2012, coming out with the famous Hyde pre workout. It was eventually time for a new, more aggressive endeavor:

“I love to lead, I love to inspire, I love high-growth opportunities. Not afraid of challenges, not afraid of adversity. And thankfully, Nic has created a soft spot for me to land here, because he’s really done things well.” 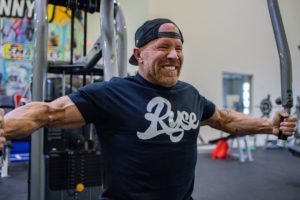 “You can’t ask others to do what you aren’t willing to do yourself.”

TJ explains how much “dumb tax” he’s paid in his 20 years of learning experience – he’s become an expert in dealing with retailers, international sales opportunities, shipping, manufacturing, distribution, and more. This is the expertise that he can pass down to Nic.

At RYSE, Nic has created a rocket ship, and TJ is making sure he has the right people on the train, and a lot of it will be with his retail expertise. They already have meetings lined up with some major FDM (Food, Drug, and Mass Market) companies and are going in with a serious tailwind due to Nic’s incredible job on the web and in social media.

RYSE is putting out an energy drink (named RYSE Fuel on their social media page), and while TJ recognizes that many energy drink consumers are brand-agnostic, they can make a better approach through specialty stores first. This will eventually lead to larger energy drink sales at FDM — but TJ’s sure to note that major chains are already very interested.

RYSE’s collabs with SunnyD and Ring Pop (which are currently the top two selling pre workouts at Vitamin Shoppe) are definitely driving much of the international and big-business interest, but it’s important to note that these products are most often first popular at supplement-specific stores before major players get involved. 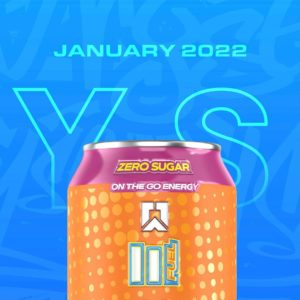 Similarly, RYSE Fuel will first be driven by these flavor collabs – the SunnyD flavor will get its own unique can. It will have 200 milligrams of caffeine and 500 milligrams of CDP-choline, so it will definitely feel very good but not hit overly hard. The cans look incredible, just like RYSE’s supplements, so the retailers that have seen the mockups and labels are already in.

Learning from past mistakes

TJ’s history with ProSupps’ former energy drink, Hyde Power Potion, and their attempted partnership with DJ Khaled, brings a ton of experience to the energy drink launch as well. As opposed to a major name not in the fitness space, RYSE leans heavily on Noel Deyzel, who they talk highly about.

Nic is sure to explain that more flavors and licenses are coming to the RYSE lineup. Two examples are Smarties and Bazooka, which will be coming in early 2022.

We go through RYSE’s pre workout lineup and discuss the differences, where the Godzilla pre workout is by far the strongest and highest-dosed one, while Project Blackout emphasizes higher stimulants and nitrates, and the standard RYSE Pre Workout emphasizes the citrulline. 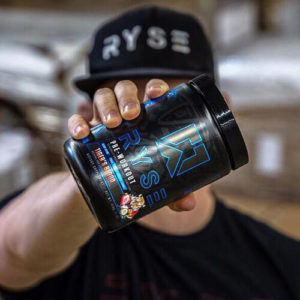 Project Blackout Pre does not disappoint, but if you need to get even crazier, wait until you see the Godzilla pre workout!

RYSE does incredibly well in the 18-30 demographic, while many of the brands covered on PricePlow are in a slightly older range 25-40. Nic has a very popular TikTok page (https://www.tiktok.com/@ryse_ceo), with plenty of videos with over 100k views.

On TikTok, we’ve seen a lot of old trends become new again, so Nic is adamant about keeping the supplements to ingredients that are backed by research.

But if you’re still on Instagram, you can follow @ryse_supps and @ryse_ceo there as well. As of time of press, you can find TJ at @ceo_swole — we’ll see if he ends up changing it or keeps the legacy going.

News and alerts can be found on https://www.priceplow.com/ryse-supps#news

Show notes for this episode are at https://blog.priceplow.com/podcast/ryse-supps-tj-humphreys-nic-stella-060