John “The Mountain Dog” Meadows knows what it takes to create a phenomenal physique — patience, hard work, sacrifice, proper nutrition, optimized recovery, and a solid supplement stack. He’s taken it upon himself to create a brand that ticks all the boxes he would look for when purchasing a supplement — including trademarked ingredients, clinically studied dosages, excellent flavors, and high quality manufacturing processes. 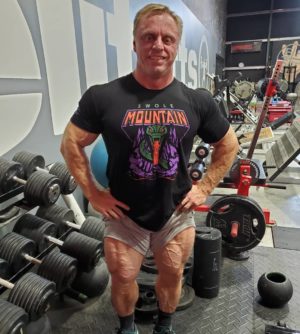 Even though John is done competing, he still trains insanely hard!

If you’ve been in the fitness industry for long enough, then you’re bound to hear the name John Meadows — he’s become a well-respected figure in health, fitness, and now supplements. Not only is John an IFBB Pro, he coaches professional physique competitors from all over the world, and has created a very successful YouTube channel and supplement brand named Granite Supplements.

John is always looking for ways to improve the company and customer experience. For instance, Granite Supplements recently switched their entire product line to eco-friendly bags instead of bottles.

Nowadays, it’s very rare to see a supplement in a bag opposed to the classic tub, but there are some hidden benefits behind this that most people aren’t aware of. Bags save space, they are easy to travel with, and the specific bags Granite uses are environmentally friendly, have a high quality locking system, so the bag won’t bust open, and feature a new eye-catching design.

GX Pre-Workout: A New and Improved Version of PRE-MIUM 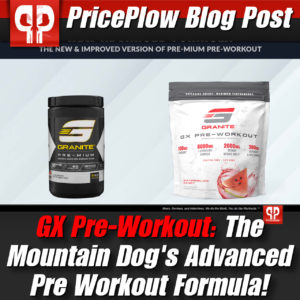 Bags are typically a cheaper alternative to tubs, and while the majority of brands would just take the extra cash to the bank — John decided to use the money to make his existing products that much better. A prime example of this is his new pre workout GX Pre-Workout, which is replacing his famous PRE-MIUM Pre-Workout.

Somehow John was able to take a product that received rave reviews from thousands of customers and make it even better by adding in great dosages of Betaine Nitrate (as NO3-T), AlphaSize A-GPC, L-Theanine, L-Taurine, Huperzine A, Vitamin B12, and Vitamin C. The old version of this pre workout didn’t include any of these ingredients, so it’s pretty obvious that John went all out with this new and improved formula!

In order to clearly distinguish between the old and new version, Granite Supplements decided to give it a completely different name, look, and flavor variations! If you’ve been blown away by PRE-MIUM Pre-Workout in the past, then just imagine what GX Pre-Workout will be like — there’s only one way to find out, pick up a bag today and experience the power of an advanced formula!

The full ingredient breakdown of GX Pre-Workout is down below — but before you read anymore, sign up for Granite Supplements news and deal alerts so you can stay up to date with the Mountain Dog!

Granite Supplements claims that GX Pre-Workout is the “ultimate pre workout on the market” and with the new additions — it may live up to that title! GX Pre-Workout features multiple ingredients that boost focus, power, performance, pump, and energy.

The supplement facts panel is fully disclosed so you know exactly how much of each ingredient is used. John made sure that this pre workout had everything you need to get a phenomenal workout and push past your preconceived limitations. Since GX Pre-Workout has 14 ingredients, we’re going to dive right into what this powerhouse is made of!

Without further ado, here’s what one serving (20g) of GX Pre-Workout delivers:

With how many active ingredients are in GX Pre-Workout, John did a phenomenal job at flavoring it! The previous version (PRE-MIUM) came in two refreshing flavors — tangerine burst and watermelon burst. GX Pre-Workout features three new flavors, but two are very similar to the previous rendition — Watermelon Candy, Tangerine Blast, and John’s personal favorite, Sour Pour!

If you want a blast from the past, you can’t go wrong with the classic watermelon or tangerine (orange) flavor. But if you’re a sour candy connoisseur, then Sour Power is a must-try! These flavors are just the beginning and we’re confident that John is working on more for the future, so stay tuned.

Here’s an updated list of all GX Pre-Workout flavor variations: 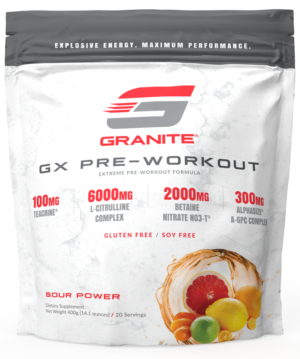 Granite Supplements have been around for a few years now, however they’re continuing to grow, improve, and become more well known within the supplement industry. John is always looking for ways that he can grow the brand, but also give his customers the best product possible.

As we mentioned before, not only is Granite switching over to eco-friendly, premium packaging — they’re upgrading their formulas along the way! If that doesn’t show you how phenomenal Granite Supplements is, then we’re not sure what else will.

Last time Granite was featured on the blog, we covered one of the most anticipated product drops from them in 2020 — Granite Protein Powder. Unlike several other protein powders on the market, Granite decided to use five different protein sources to deliver various amino acid profiles and digestion rates. It was a very unique protein powder to say the least, tasted great, and digested really well.

Granite Supplements is having an incredible year thus far and are looking to continue that trend moving forward. Make sure to subscribe down below so you can stay up to date on the latest industry news, reviews, deals, and interviews from PricePLow!