See PricePlow.com/kaged to save on Kaged Supplements!

For years, we’ve been huge fans of Kaged’s Supplements, which all began with the epic Pre-Kaged pre-workout supplement – one of the first major supplements to advertise naturally-sourced caffeine. The brand’s legendary status was solidified with their release of Hydra-Charge, a unique and insanely delicious hydration formula that doubles as a flavor system for your raw ingredient powders.

One Kaged release that slipped by us, however, was the energized version of Hydra-Charge, launched in May of 2021. Better late than never:

Hydra-Charge Amped – Electrolytes with a 200mg Spark of Energy 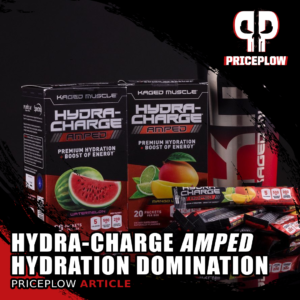 Electrolytes, incredible flavor, and energy from naturally-sourced caffeine. Can Hydra-Charge Amped get any better?!

So today we’re talking about Kaged’s Hydra-Charge AMPED, a hydration supplement formula that’s designed to keep you functioning optimally during exercise or while under stress.

What makes this supplement AMPED? The hefty dose of naturally-sourced caffeine, a phenomenal ergogenic aid that helps your body more efficiently burn both fats and carbohydrates for energy, thus increasing your physical and mental performance.

And if you have raw ingredients like Kaged’s CreaClear, you can still use it as a custom flavor system just like the OG Hydra-Charge… only this time with energy.

The story and science are below, but first, take a look at our PricePlow-powered prices and sign up for Kaged news, we have more content from the team coming!

Why a hydration formula? 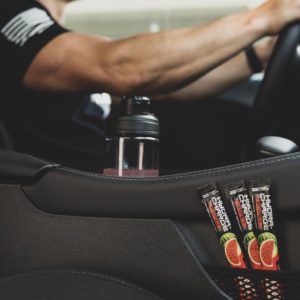 The coolest thing about Hydra-Charge Amped? It comes in convenient stick packs!

We all know the incredible power of exercise to improve human health, and the importance of staying as active as we can, especially as we age.

But most of us don’t give much thought to how we can support and optimize that activity.

When you exercise, or are even just subjected to stress, your body will lose a lot of water-soluble vitamins and minerals. Some of these minerals, known as “electrolytes,” are crucial for the basic functioning of your cells, and particularly your muscles.

Hydra-Charged AMPED will help you do that, with almost no caloric content or insulinogenic activity.

And remember, if you don’t want the caffeine, you can still get the original Hydra-Charge!

With the inclusion of ingredients like taurine, tyrosine, and SPECTRA, Hydra-Charge AMPED from Kaged goes beyond the scope of a standard hydration mix. It doesn’t just replenish what we lose during exercise, but also helps optimize some subtler dimensions of performance such as energy availability, focus, and motivation.

One thing to note about Hydra-Charge AMPED is the caffeine content: 200mg is a sizable dose, so this isn’t a product that you can absent-mindedly sip on throughout the day. You have to be mindful of your overall intake and make sure you’re not getting too much caffeine.