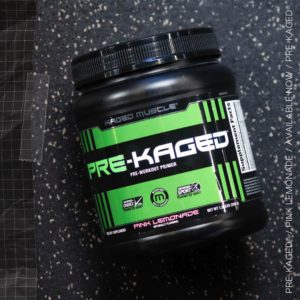 Kaged Muscle’s iconic pre workout gets an update. And now it’s better than ever!

Fitness buffs and gym junkies alike know the name Kris Gethin. When he debuted his supplement line, Kaged Muscle, it was met with rave reviews. Initially the brand was just releasing high quality bulk supplements that you could add to your existing selection of pre, intra, and post workouts.

It was doing incredibly well, but after several requests, Kaged Muscle knew it was time to formulate a complete pre workout that would blow away any other formula on the market. After months of research, testing, and revisions, they finally released Pre-Kaged, which became an instant best seller! This pre workout shocked the industry, by featuring a nearly 30g serving size filled with ingredients that would cover all of your workout needs from focus to power to pumps to energy.

Pre-Kaged Gets An Update Based On Your Feedback! 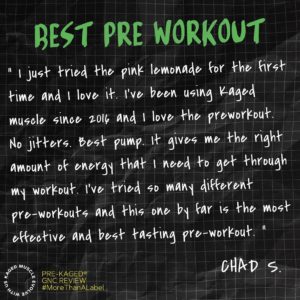 Customers love Pre-Kaged so they didn’t want to change it too much!

But that was back in 2015, so what’s changed since then? Over the years, Pre-Kaged has really built a strong reputation in the industry, by winning several awards from big companies such as Vitamin Shoppe and Bodybuilding.com, while also receiving thousands of 5 star reviews.

At first, Pre-Kaged was only available in Fruit Punch, but now you can find it in Pink Lemonade, Orange Krush, Berry Blast, and Krisp Apple! And if that’s not all, Kaged Muscle releaseed Stim-Free Pre-Kaged that can be stacked with Pre-Kaged, allowing you to customize your caffeine intake, but still get all the active ingredients!

It’s safe to say that Pre-Kaged was formulated very well from day one, because they never had to make any big changes to keep up with the competition. It’s not like Kaged Muscle is against updating their formulas, but if something isn’t broke, why fix it? And the reviews and awards speak for themselves. However, Kaged Muscle is all about giving their customers the best product possible. And over the past five years since Pre-Kaged launched, they’ve collected you feedback and decided 2020 was the perfect year to make a few minor tweaks to the massive formula we all know and love.

Over the past few years, we have been asked by our customers if we could work on improving the mixability of PRE-KAGED. Since PRE-KAGED contains a lot of natural ingredients and a massive 30g serving size this was no easy task. Our team optimized PRE-KAGED by making 2 ingredient changes. First, we removed 200mg of quercetin. This substantially improved the mixability and flavor profile. Second BetaPower was increased from 2g to 2.5 grams, giving you 25% more per serving. You can now mix PRE-KAGED with less water if you prefer and will experience a smoother flavor with improved mixability.

But for all you die hard Pre-Kaged fans, don’t worry, because the formula hasn’t changed too much! In this post, we’re going to run through the new and improved Pre-Kaged to show you all the benefits it has to offer and explain the key changes Kaged Muscle made!

Note: In 2020, many stores will still have the original Pre-Kaged formula. For the new formula, look for 2.5g betaine anhydrous on the label, ask the retailer, or get the one directly from Kaged Muscle’s website!

Pre-Kaged is serious about providing you with any and all raw materials your body will need to dominate whatever your workout maybe. Weighing in with a hefty 29.4g per single scoop, KG left no stone unturned in what you would need to be primed and ready to tackle your weight training session. For the new formula, Kaged Muscle simply removed the quercetin and bumped up the betaine anhydrous dose to 2.5g! These small tweaks allow you to use less water with Pre-Kaged, while giving it improved mixability.

Now, let’s get right to what this award-winning beast has to offer!

Kaged Muscle is known for releasing delicious flavors without using any artificial flavors or colors. When Pre-Kaged first launched, it was only available in Fruit Punch, but over the years, they’ve been able to expand the line with three more flavors, including the fan favorite, Pink Lemonade. With this updated formula, we expect Kaged to continue releasing more flavors, so stay tuned and the list below will be updated accordingly! 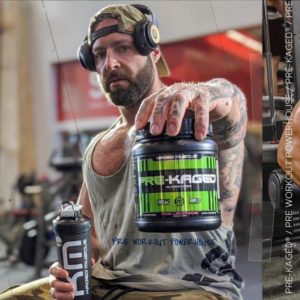 Kris Gethin stands behind every single supplement they produce, including the new Pink Lemonade flavor of Pre-Kaged.

Pre-Kaged Stands The Test Of Time

Back when Kris Gethin and Kaged Muscle released Pre-Kaged in 2015, it really showed the industry what a complete pre workout formula should look like. Just by looking at the ingredient list and how massive the serving size is, you can tell Pre-Kaged has everything you need.

So if you look at the updated formula and say “it hasn’t really changed that much”, it was for a reason, a great formula doesn’t need to be drastically altered. Kaged Muscle just wanted to make a couple tweaks based on your feedback, because they are all about putting the consumer first. 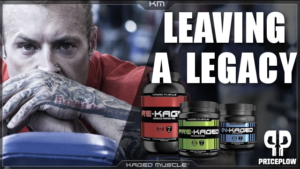 In our latest interview with Kris Gethin, the Kaged Muscle founder talks about earning his residency on earth and leaving a legacy with Kaged Muscle!

They already knew Pre-Kaged was top notch, because despite all the pre workouts that have been released over the years, Pre-Kaged still domniates. It’s won several awards and continues to be recognized by several big names in the industry. And with all the possitive feedback, Pre-Kaged has received, it doesn’t make sense to completely overhaul the tried and true formula it’s built on. When you use clinical dosages of ingredients backed by research, your product is guaranteed to outshine it’s competitiors from day one. So for all those fans out there that can’t go a workout without Pre-Kaged, don’t worry, the formula just got better!

Note: In 2020, many stores will still have the original Pre-Kaged formula. For the new formula, look for 2.5g betaine anhydrous on the label, ask the retailer, or get the one directly from Kaged Muscle’s website!