Controlled Labs is on fire lately, and they’re not letting up now.

The creators of Purple Wraath recently pulled a major win against Marc Lobliner in the decade-long BCAA vs. EAA war and now they have one of the best nootropic powders we’ve ever tried in Orange Brainwash, and the Orange Triad multivitamin continues to pull consistent sales thanks to its added joint support. 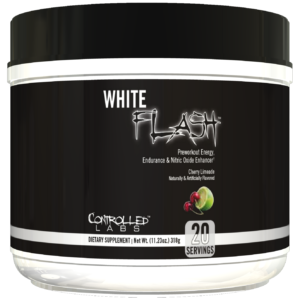 Controlled Labs White Flood was one of our first ever pre workouts… but White Flash here takes the cake and then some!!

Needless to say, it always piques our interest when this brand drops new supplements, because they’re always very unique and ahead of the curve (sometimes 10 years ahead of the curve, as was their case with Purple Wraath).

But in this industry, it’s all about the pre workout, an area where Controlled Labs has always excelled, but never fully dominated.

That changed this spring, because the company has just released what is easily its best pre-workout ever!

Controlled Labs says it made White Flash with a single goal in mind: to create the ultimate pump product that competitors can’t touch.

They’re claiming that it’s with the best new novel compounds, and at proper dosages… and we’re not arguing. This label is ferocious.

Come for the L-citrulline and caffeine, stay for the VASO-6 and Lion’s Mane

Consider Controlled Labs game 100x stepped up after reading about this and Orange Brainwash!

Utilizing a synergistic combination of ten ingredients to attack the pumps, focus, and stimulants… users may come for the L-Citrulline and caffeine (300mg), but they’re going to stay for the VASO-6 and Lion’s Mane.

Controlled Labs just upgraded their pre workout menu — and now they’re ready to upgrade your workout plan. We get into the ingredients below, but first, let’s take a look at the PricePlow prices and sign up for Controlled Labs news and deals:

When a brand makes a statement like that, we head to the label and realize that they’re not kidding!

So, what makes White Flash worth considering as your next pre-workout? A single serving is just under 16g in a scoop — fairly large — but you’re going to get 20 of them in a tub. Before going any further, let’s re-emphasize that there’s 300mg caffeine per scoop, but if you’re caffeine-sensitive, even ⅔ scoop should provide some sick performance:

What a formula! This all deserves a spinning White Flash:

You know it’s for real when there’s an animated gif involved!

What’s with the names with colors?

If you haven’t realized, Controlled Labs’ product names always start with a color. Controlled Labs categorizes its products by colors, so you know if the product starts with the word “white,” then is a pre-workout.

But if the first word is “Orange” (such as with Orange Brainwash or Orange Triad) then we know it is a general health supplement.

It’s an interesting way to categorize their products, and it certainly keeps things “controlled.”

Nothing too crazy here, which is usually a good thing given Controlled Labs’ name and long-time customers who look for results, not unicorn cereal bowl flavors!

Takeaway: A must-try pre workout for 2018… and beyond

Taking a stroll down memory lane with Controlled Labs pre workouts, White Flood was the OG that made us love the brand, and this is the next pre workout to do it again!

White Flood Reborn had to deal with an era of ‘spiking’ and never took off, White Rapids was more of a “value” play, and there have been several other stim-free products such as White Blood, White Pump, and White Pipes.

White Flash is on a whole other level than all the others.

With their latest rendition here, Controlled Labs has made one of the more interesting pre-workouts we’ve seen in recent memory. Literally not a single complaint with this supplement.

The label calls for 12-16oz water, just where we like it!

Getting back to the claims in the intro, the label definitely backs it all up on paper, and we agree that White Flash is not only the best pre-workout from Controlled Labs, but it is pushing the limits of what a pre-workout can be in 2018.

Welcome back to the show, Controlled Labs. A highly-respected company needs to have a highly-respected pre workout, and they’ve done it and then some – without needing any ‘exotic’ stimulants.

We have no complaints and no further questions on this one. It’s simply time to dive in and try it.