It’s collab season at Ghost, and they industry-leading brand is kicking it off with not just one, but three Christian Guzman fronted supplements: 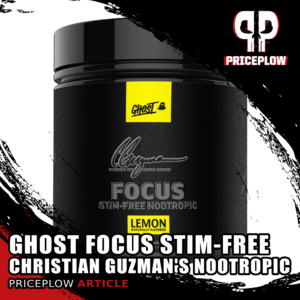 Christian Guzman is here to boost your focus, and he’s doing it with a lot of high-quality choline!

Need a great nootropic… without the stims?!

As one of the busiest “athletepreneurs” in the business, Christian loves his nootropics. That’s why his fourth installment of Legend linked above had double doses of the three main focus ingredients, along with more energy than Ghost has ever used.

But what to take when you’re looking for that focus and want to keep it stim-free or just drink it alongside an energy drink or coffee?

This article digs into the ingredients of this new Ghost supplement, and is the second installment of our 2021 Christian Guzman Ghost collab series. As always, sign up for PricePlow’s Ghost news alerts, since there’s always something new around the corner:

Ghost Focus’ formula is quite similar to a lighter, stimulant-free version of Ghost Gamer, without the gaming-specific ingredients.

The label has both one and two scoop breakdowns — our listings are based upon two scoops. We’ll also focus on the cognitive effects of these ingredients, although most of them are multifaceted:

At launch, Christian Guzman’s Lemon flavor is the only flavor, but in case others come out in the future, see the list below:

Watch the Team Talk about Focus 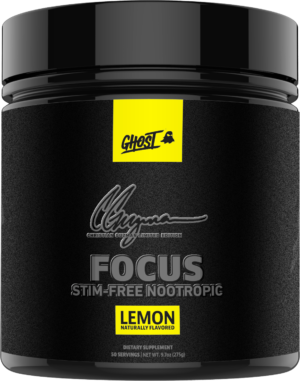 These tubs are very unlike Ghost, but they’re also very slick.

You can’t drink caffeine all the time. And even if you could, sometimes you want a coffee, fat burner, or energy drink instead of Ghost Gamer or that insanely well-formulated Ghost Legend V4 Christian Guzman collab.

When you need a blast of choline, carnitine, tyrosine, and taurine… but want to keep the stimulants away, this is where to go. Fight through the brain fog of dieting or sleep deprivation and stay true to your path — just like CG has stayed true to his — with Ghost’s Stim-Free Focus.

We sound like a broken record at this point, but anytime we see well-dosed choline blends, we get excited, because we know it’s going to feel good for us. We’re confident it will for you too, and we’re happy to see Ghost (and Guzman) paying attention to the details with the quality forms of B-Vitamins and natural mineral sources.

A stim break doesn’t need to mean a total focus break. Focus should help you keep the lights (and the lemon) on even without the caffeine.