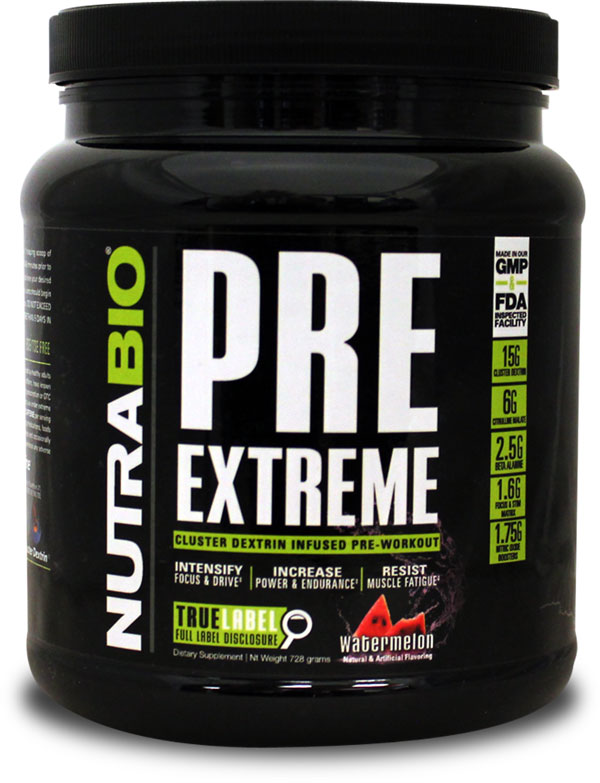 NutraBio’s PRE Extreme is another in a wave of high quality effectively dosed pre workouts hitting the market in 2016.

Update: PRE Extreme has made it atop our 2018 Best Pre Workout Supplement List! Read on to see why!

Take a look at your pre workout supplement. How many carbohydrates does it have?

Chances are, it’s zero. But why?

So why not use a killer pre workout that puts them there?!

So today, we are back again with another stellar contributor to the market in NutraBio’s PRE Extreme V5.0, which is the carb-enhanced, yohimbine-enhanced version of the original NutraBio Pre Workout.

These two pre workouts are our top-rated ones, but truth be told, we think more people need to look at this one over the original for those carbs.

We got a hold of the label as well as got some inside info that went into the formulation of this behemoth, so get ready for the inside story, but only after you check PricePlow’s deals and sign up for NutraBio news:

Just take a peek to the right at the picture and look really, really close at the serving size. One scoop is a whopping 44g – absolutely massive even by today’s standards! Of course much of that comes from the carbs, but there are a ton of actives in here and this is simply one hell of a formula.

There are two most important things to note:

Point being… NutraBio has something for practically everyone, and many of their products are fully-loaded like this with a few options along the way.

But today, we’re talking about the stims and the carbs, so let’s get to it:

Now that’s one insanely solid effort from a company that’s really going to be storming the stores soon. We have ours on the way, and are pretty confident it’s going to work extremely well.

If you haven’t heard of NutraBio, then get ready – these guys had been “lurking in the shadows” for nineteen years, building a massive brand outside of the typical retailer network that we deal with. And now they’ve been unleashed onto the world.

The long story is on our blog post titled “The NutraBio Story“, but in short, we started talking to them when their founder and CEO began commenting on our amino acid spiking articles — it turns out, they’ve been creating 100% open, non-proprietary formulas and railing against non-compliance and spiked products since way before it was cool. They’re now perfectly poised to launch into the forefront with their message.

Below we see what Mark’s got to say about the carb situation in PRE Extreme:

Carbs or No Carbs…

NutraBio also offers a carb-free version of PRE Extreme, aptly dubbed PRE. Most pre workouts on the market are carb-free concentrates made up of stims and other various ergogenics designed to enhance performance. Additionally, most people in today’s day and age are carb-phobic and will shun the precious energy source for fear of getting fat.

We went to the source again to find out why they are offering a version with carbs, and here’s what he had to say,

“Personally, if it were up to me I would only offer the PRE Extreme with carbs. Unfortunately, too many people hit their workout with insufficient nutrition, burn through glycogen and go catabolic too quickly. But there are a lot of carbo-phobes still out there that will be against it.

I add carbs to every pre-workout shake, and drink them intra workout as well. That’s what motivated me to make this version. I was mixing them myself and said why not offer it together, it will help more people stay in an anabolic mode.”

So there you have it! If you’re really wanting to maximize your performance in the weight room, don’t fret over the carbs in PRE Extreme. You’ll be well rewarded for including them pre workout.

And if you are worried about carbs, your best bet is to track them in a calorie counting app, and adjust them elsewhere in the day. Low-carb or not, it’s tough to argue with the platitudes of research that show carbohydrates helping with workout performance for most people!

CJ and Amin tried the new v4 Green Apple flavor, and unsurprisingly, it really did them well (you’ll realize why after seeing the label). Watch how swole Amin gets! 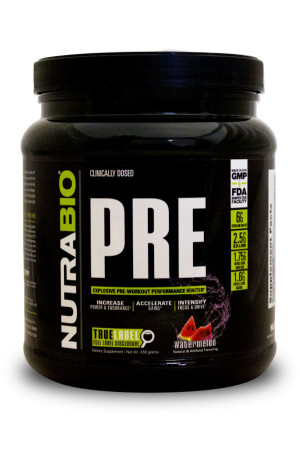 Don’t want carbs? Then there’s a product for you – it’s just not as EXTREME!

Take a look at the bottom of the ingredient label. NutraBio even tells you how much sweetener, color, and emulsifier is in there! This is known as full label disclosure. There for anyone, including you, to copy. That’s how confident they are in their brand. How can you not love that?

If you want to read more about that, then check out The NutraBio Story, a blog post detailing the history of Mark Glazier’s NutraBio!

Bring Quality Carbs back to your pre workout!

Whew, if you made it this far, then thank you! That was obviously a lot to go through, as we get with NutraBio’s monster formulas. They’re not the cheapest on the market, but once you start doing the math, you realize that you’re getting a hell of a lot more for not having to pay that much more, and all batches have their third-party lab tests published too!!

PRE Extreme V5 holds literally nothing back in creating one robust formula that will cover every single base you could hope to address in a pre workout. Are you ready to get real and start using carbs when they’re supposed to be used — around your workout?! If so, then this is the pre workout for you.

So take a look at the prices by using the price comparison widget below and check out our alerts for all NutraBio news, this company is well worth following: