Get ready for the BOOM!

For far too long, American gym rats have been enamored by “sub-maximal” workouts and “deload days”. Long gone are the days of iron slamming into the ground as chalk floods the air. 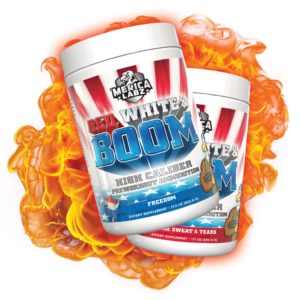 ‘Merica Labz Red, White, and Boom has been reformulated, and it’s in a way never before seen!

‘Merica Labz has recognized this shift in our culture and has come guns a BLAZIN’ to rectify it. Through Red, White, and BOOM, they’re trying to make America Swole Again.

Patriots be proud: The premise behind the ‘Merica Labz has been a knockout success – as seen in our Patriots Whey review! The brand set forth to replicate that feeling of pride you get on national holidays – but now you get it every day you hit the gym. That feel-good moment when the fireworks are exploding all around you while the Star-Spangled Banner blasts in the background, reminding the world that you are willing to fight for your freedom, otherwise there’s nothing else worth training for.

‘Merica Labz took that positive sensation and combine it with a balls-to-the-wall stimulant-based pre workout, which has recently been updated with a ton of choline and a massive dose of L-Tyrosine for crazy focus — more than we’ve ever seen in any pre workout. We should get a Patriotic feel-great workout here that’ll throw us right into the fray.

Did ‘Merica Labz hit the mark? Let’s find out, but first you can check the prices on PricePlow and sign up for Merica Labz’ updates:

Not to be confused with the Red, White, and Boom Energy Drink by Merica Labz’, this is a powdered pre workout supplement, and it was made by some very stable geniuses:

The Red, White, and Boom Ingredients

This formula is “simple” in that there’s not a billion ingredients, but powerful in that each and every one of them is dosed to the extreme.

White hats worldwide, let it be known: Just to get it out of the way, note that you’re going to have 400mg caffeine in each serving, and that’s not the only stimulatory ingredient.

But also note that if you partial-scoop it (recommended for starters), you’ll still get legit doses of everything else! Let’s have at it:

Your High Caliber Pre Workout Ammunition has arrived just in time to bring the PAIN to the weights… and to the traitors alike!

You know the game, especially if you’ve seen our Patriot’s Whey review – these guys keep the flavors fresh!

‘Merica Labz came up with some great ones for Red, White, and Boom. 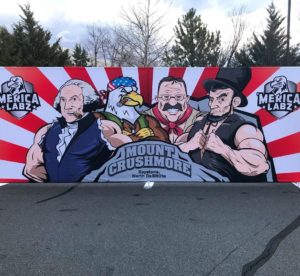 Ready to climb to the top of Mount Crushmore?!

Sweetened with sucralose, and one flavor has stevia too

When we saw “naturally and artificially flavored”, we had to look. This often means there’s stevia present, which could wreck a flavor system if not done correctly. Thankfully, all of the products are using sucralose for the flavor, while “Make America Grape Again” has a dash of added stevia.

It’s great to go all-natural, but when it comes to sweeteners, sucralose is where it’s at.

‘Merica Labz surprised us with this reformulation – and in a good way. Other brands have replaced stims that the FDA despises with a smattering of other stimulants. Red, White, and BOOM is different in that they went with Theacrine and monster doses of tyrosine and choline, something everyone should enjoy! 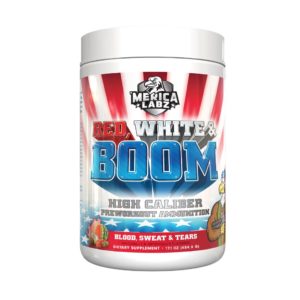 Get ready to get focused, the new Red, White, and Boom is not for socialist sissies

The BOOM is still a true one-scoop pre-workout that covers its bases well, and Team PricePlow is pleased. The 400mg dose of caffeine may turn off some customers though, but still – you have enough citrulline to get a pump even on an underwhelming scoop!

‘Merica Labz deserves additional props for avoiding Alpha-yohimbine as a sensory ingredient, which has been popping up everywhere and rendering the PricePlow team anxious messes with cold sweats. (Isn’t it sad we have to say this right now?)

We recommend giving the new Red, White, and BOOM with the small caveat of maybe starting off with ⅔ to ¾ of a scoop. Make sure you can handle the massive caffeine boost before you take a full dose of the product, and then get ready to bring in the Great New Awakening with a BOOM!

NOTE: This blog post is hosted on a server that has not been intentionally left insecure in an effort to sell state secrets in a massively treasonous pay-for-play conspiracy. We do our very best to maintain security and integrity.