The Genius Brand‘s takeover of Amazon has been swift, and it’s been strong. Hitting the underserved demographic with open-labeled, dye-free, naturally flavored and naturally sweetened supplements using mostly trademarked ingredients, Genius has taught a new generation of consumers to #SupplementSmarter. 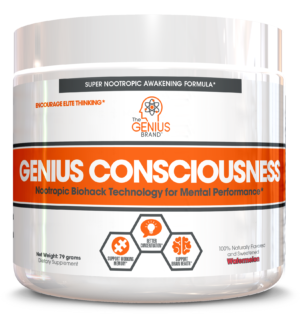 The Genius Brand finally has a nootropic! After waiting on something new – and that something was Dynamine – Genius Consciousness has arisen!

But something was always a bit “off” about The Genius Brand’s portfolio of goods. It’s not what was in the products, but instead, what was missing:

For over a year, The Genius Brand had no nootropic!

Sure, there were well-dosed focus boosters in their supplements such as Genius Pre, and Genius Joy (Mike’s favorite product in the line) could be considered a nootropic in its own right… but we found it crazy that a brand with the name Genius in it didn’t have a true nootropic!

Well say no more, because Genius Brand fans are now ready to achieve a higher state of clarity than ever before, with Genius Consciousness.

This stimulant-based powdered nootropic supplement has moderate amounts of energy (100mg caffeine + 50mg Dynamine) and a high number of nootropic ingredients (ten of em!)… yet no artificial flavors, dyes, or fake sweeteners — as we’ve come to expect.

Below you can sign up for PricePlow’s Genius Brand coupons and news alerts, then let’s get on to our enlightenment:

Here we go, ten ingredients per 5.3g scoop! As you can see in the label below, Genius is showing both 30 half-scoop servings and 15 full-scoop servings.

Since most people will full-scoop it (each full scoop has 100mg caffeine), we’re calling this a 15-serving container, unless you want a bit less energy, like that of a diet soda.

As with anything we write about here, it’s going to come down to value. At a first glance, the whole 30-half-scoop / 15-servings thing was offputting. But then the formula started to become clear – there is a clear case for trying this: 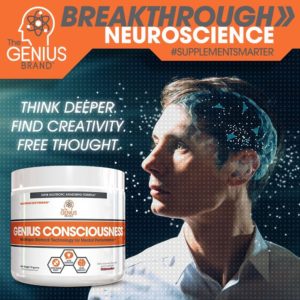 Those pupils say it all!

Every ingredient here has good use, and most of them are well-dosed. If you were to put this stack together yourself, you’d be popping pills and spilling powders all morning long! So Genius did that part for you, and now you can get a well-rounded memory/focus/energy aid without going insane…

As always with The Genius Brand, you won’t see any artificial colors, flavors, or sweeteners in here.

Per the image, the product is launching with watermelon flavor, but we’re not sure of any others, so sign up for alerts below!

What took Genius so long?!

So we had to ask – what took The Genius Brand so long to come out with a nootropic?! Here’s what they had to say:

LOL… Trust me, I thought the same thing every day. We didn’t launch with a nootropic as our first product (Burn & Caffeine were) but I thought about pretty much daily from there on out.

The problem was, I didn’t see anything on the market to really set it apart. Burn has a strong nootropic profile in its own right so we just decided to put it on hold until something “game changing” came along and then at the Olympia when we got some of the first Dynamine samples from Compound Solutions, I knew it was time to finally move!

We wanted to create something that lives up the name Genius. We wanted to cover all of the basis of general brain function and then give the product some actual kick that you feel a difference with the 1st time you take it.

And finally, The Genius Brand has a nootropic!

They’ve once again put together a well-dosed formula, full of trademarked ingredients that are mostly well-dosed, especially if you don’t want the stim-effect to be too strong.

In a market where the most intense nootropic users enjoy concocting their own homemade stacks, it gets to a point where you start to love all kinds of ingredients, but stop loving all of the tinkering, weighing, and pill swallowing. With ten ingredients here, it’s best to leave it to the pros, who can put it all together in a single tub and keep the fillers to a minimum and the genius state of mind to a maximum.

Long story short, everything inside Genius Consciousness looks good and even fresh to us – but the only drawback is that we’d tear through this tub in two weeks or even less, and likely be left wanting more.