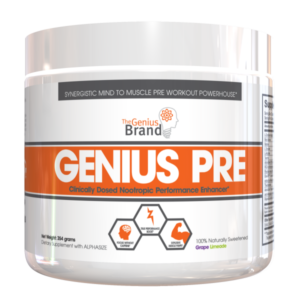 Genius Pre is a clinically dosed, stimulant free pre workout that enhances cognitive function but won’t leave you feeling bottomed out from a rush of caffeine.

We recently featured a brand taking a more enlightened approach to supplement formulation named The Genius Brand. In our blog post, we detailed how the company was born out of a group of individuals sick of the endless scandals, FDA raids, and ineffective products that dominate the supplement landscape.

We’ve got more info on the product below, but first, take a moment to check the best deal and sign up for alerts from PricePlow:

Genius has certainly loaded their pre workout with a hefty helping of nootropics that will not only enhance your focus and cognition during workouts, but also your mind muscle connection and power!

On the Stim-Free Formula

Many will scoff at Genius Pre without ever trying it simply for the fact that there is no caffeine or “aggressive” stims like. We asked Genius why they decided to go the caffeine free route when formulating Genius Pre:

”It sounds cliche but we are really trying to change the way people think about pre workouts. There has been a clear shift toward non-prop blends and clinical doses but we wanted to go even further and say LOOK!! YOU CAN STILL HAVE A TOP NOTCH PRE WORKOUT WITHOUT THE STIMULANTS!! We just think the whole idea of what “pre workout” is, is completely off. You don’t need to “feel it” to have an effective pre. The general idea here was just to try & change the general consensus of what pre workout is & what should be.”

Genius’ products are naturally sweetened with stevia and contain no artificial colors, dyes, flavors, or sweeteners. As you may expect, flavoring is rather difficult when taking on that task, but, speaking from personal experience, the flavoring if extremely well done and is definitely one of the better tasting natural products on the market. 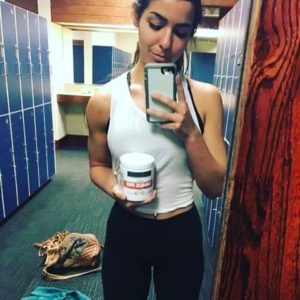 “Huge shoutout to @dalelrose for giving Genius Pre a chance!!”

Only flavor of Genius Pre is currently available: Grape Limeade.

It definitely delivers on taste and is a welcome addition to a market saturated with boring flavors.

How’s that for a brain and brawn boosting pre workout?!

Genius Pre is an incredibly well dosed pre workout that will have you making significant gains both in your workout and outside of it, due to the considerable doses of nootropics contained in it.

You probably noticed there’s no significant energy component to Genius Pre… that’s by design. The Genius Brand also developed their own sustained-release caffeine, aptly titled Genius Caffeine which perfectly pairs with this and gives users the option to include additional energy if they truly want more during their workout.