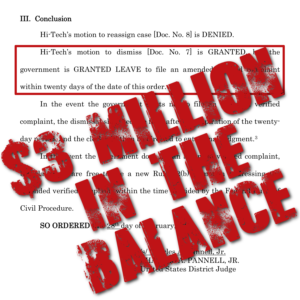 A US District Judge has sided with Hi-Tech Pharma — for now at least — regarding at least some of this seizure. The FDA was given 20 days to respond.

It’s been a while since we’ve given an update on the ongoing series of legal battles between Hi-Tech Pharmaceuticals and the United States Federal Government, but we’re in the midst of one of the major decisions to come down over the past six months.

Where are we now?

As a recap, there are a few things going on:

In the fall of 2017, the FDA accused Hi-Tech Pharmaceuticals of selling scheduled controlled substances in the aforementioned two-stage PH, filed as charges lower down in the “Red Yeast Rice” indictment in item #2 above. They claimed that additional compounds such as the illegal 4-androstenediol was found in Hi-Tech’s 1-AD, a supplement that Hi-Tech argues is not illegal.

According to Chemspider, some of compounds Hi-Tech argues are legal have the same molecular weight and molecular formulas as the ones the FDA is claiming to have found — C19H30O2 (1260 compounds share this molecular formula!)[1] Suspicious?! Did they do identity testing?!

In response, Jared Wheat decided to temporarily discontinue their production in order to get multiple rounds of lab-tests for future batches, although we have not yet seen sufficient evidence proving allegations (the lab tests provided to us so far raise several questions and do not provide quantitative data).

This decision was made in order to prove that there were no controlled substances inside – and it looks like those now-highly-tested products are on their way back to the market now.

But something else has been brewing that completely slipped under our radar, because it’s in yet another case ID (this ongoing war is tough to keep track of, if you haven’t noticed). Today we’re talking about the related raids of two sizeable bank accounts:

An unwarranted seizure on top of an excessive seizure?!

It gets crazier: when an additional $424,009.85 posted into one of those accounts after the first warrant and seizure, the FDA seized that as well (on October 12th, 2017), despite no new warrant being served to Hi-Tech Pharma!

The sum, totaling over $3 million, is the combined total of everything in those accounts. The seizures were due to the sales of allegedly misbranded supplements by Hi-Tech — ie the DHEA metabolites discussed above. The money was seized and confiscated from those accounts on October 4th.

While Hi-Tech hasn’t even yet had the chance to argue the specific charges or lab tests, they made a case for the seizure’s illegality – and it looks like they may be getting their money back.

The above three documents are the most important in this newfound case. Undercover FDA purchased $1,148.75 in supplements from Hi-Tech Pharma, and used them to allege crimes. Those funds were deposited (or transferred) across the above two accounts.

Once the indictments were served, the seizures went down. But the FDA didn’t seize $1,148.75, they seized everything. So that’s where Hi-Tech had to fight first. 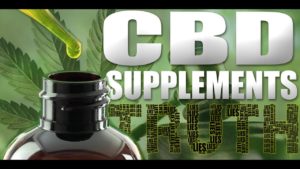 So can they take everything if it wasn’t proven to be related to the alleged crime? The answer isn’t always clear — welcome to the ramifications of the ongoing drug war in America.

In order to conduct a seizure, there doesn’t need to be proof of crime – just sufficient evidence to uphold a reasonable belief that at trial, the government will be able to prove that at least some portion of the property was subject to forfeiture. This is 18 U.S.C. § 981(a)(1)(C)[2], the law regarding civil forfeiture.

Without even yet arguing the charges themselves, Hi-Tech has a bone to pick: how can you empty the entire account when you have no clue where that money came from? Because outside of those undercover purchases – which Hi-Tech still deems legal – the FDA never presented evidence regarding the cash in those accounts.

Hi-Tech spends the bulk of its brief arguing that the government cannot support a seizure of more than $3 million with two instances of undercover purchases.

The Eleventh Circuit has held that even funds derived from legitimate sources are forfeitable when those funds are used to facilitate an illegal scheme.

— The Honorable Charles A. Pannell

So, for instance, let’s say you had a car that you legally bought from your 9-5 earnings, but then used it to deal crack to the local kids on the weekend. Your car was used to facilitate the illegal scheme, so it’s now forfeitable.

Is saved money a facilitator?

But Hi-Tech’s other, non-DHEA-made money sitting in those accounts — whatever those sums may be — weren’t used as vehicles as to facilitate the alleged “DHEA-based crimes”. That money was just sitting there in the account, made from other endeavors, such as Hi-Tech’s numerous fat burner sales (because, let’s be real – the ‘pills pay the bills’). And no fat burners were at all named in this indictment.

So the Honorable Charles A. Pannell, US District Judge, made his decision – for now, at least:

Motion to dismiss GRANTED, but the government is GRANTED LEAVE… 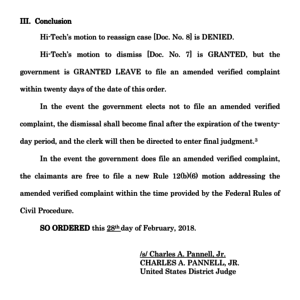 Next move belongs to the FDA.

Due to the lack of evidence regarding the specific money confiscated, the judge GRANTED Hi-Tech’s motion to dismiss, but has GRANTED LEAVE to the US Government to file an amended verified complaint within twenty days (due around March 19th).

Ten days in, and the government hasn’t yet filed, but we have to assume they will do so after looking over the transactions they have on hand.

Bending but not yet breaking

From the outside looking in, it’s clear that the federal government is doing anything they can to starve and bleed out Jared Wheat. They’ve prevented his ability to manufacture or sell DMAA. They’ve imprisoned his Chinese suppliers. They blasted the andro’s off the market (quantitative lab tests be damned?), causing him lose several customers. And they seized millions of dollars, perhaps not all with evidence.

And yet Wheat and his lawyers keep coming up for air, striking back wherever possible. The FDA has ten days left to counter-strike, and you can assume they will.

Either way, strongly assuming that Hi-Tech’s business is not predominantly based off of the DHEA metabolites, you can expect them to get a serious amount of money back – if they can survive to that point.

What they’ll do with that money — if they ever get it back — is anyone’s guess, but you can bet it’ll go into more legal fees for their other battles, and more product development for upgrades to their moneymakers such as the updated HydroxyElite and Synadrene fat burners, all in an effort to go after the big dog: the DMAA Lawsuit Appeal.

We don’t need to tell you, but here it is anyway: stay tuned.