Posted on January 11, 2022 by Mike Roberto and Nick Andrews | No Comments

One thing we don’t see very often in the supplement industry is innovation in the product’s form factor and method of delivery. Although there are plenty of rising companies that are coming up with novel ingredients and exciting new formulas, pretty much everybody sticks to the tried-and-true delivery system: powders with scoops, or capsules/tablets/softgels. 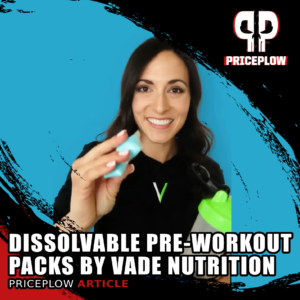 Now here’s a new way to take your pre-workout: in dissolvable packs! Meet VADE Nutrition and their Extreme pre-workout, which includes a full dose of Nitrosigine for pumps!

That boring streak is officially broken with VADE, whose 2018 appearance on Shark Tank propelled them into the public eye with a new technology to deliver ingredients into your shaker cup: readily-dissolvable packs that are designed to dissolve once mixed into water.

To use them, just drop the dose into your water bottle and shake for 10 to 20 seconds. After that, your shake is ready to go! It all started with protein packs, which is what VADE presented on Shark Tank. But now, they’re using the technology to take your pre-workout to the next level:

The young company has two pre-workouts – VADE Dissolvable Pre-Workout Packs and Vade Dissolvable Extreme Pre-Workout Packs. Today, we’re of course covering the extreme version, and the delivery design isn’t all that VADE has going for it: there are some excellent ingredient choices (such as a full dose of Nutrition21’s Nitrosigine) and flavors as well.

It’s covered below, but first, take a look at PricePlow’s prices and sign up for more VADE alerts if you want to see when the next “pod” drops:

As for the ingredients, let’s take a look:

In a two-pack serving of VADE Extreme Pre-Workout, you get: 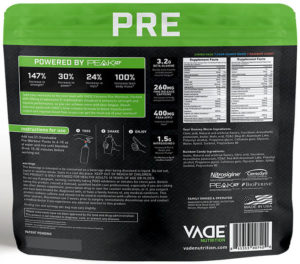 The full back label

For something like a gummy gel pack form factor (quite possibly inspired by Tide Pods), you’d probably expect the product to rely on this as a gimmick, but that is absolutely not true in the case of VADE Extreme Pre-Workout. Given how much research has been published on Nitrosigine — and a new study just published a month before this article — a full 1500 milligram dose brings everything into legitimacy.

But beyond Nitrosigine, we also have some truly sophisticated ingredient choices, including a couple awesome ones we rarely see, such as PEAK ATP.

If you’re looking for something new, entertaining and awesome, with delicious flavors, definitely give VADE Extreme Pre-Workout a try.