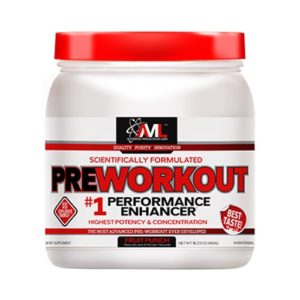 Advanced Molecular Labs Pre Workout is a true beast of a pre workout that uses clinical doses of staple ergogenics powered by 400mg of pure caffeine.

We recently introduced you to Advanced Molecular Labs (AML), headed publishing and supplement guru Steve Blechman. In that same article we referenced one of AML’s pre workout additives named Power Rep, which uses a combination of Peak ATP, synephrine, and theacrine to enhance your overall power.

While Power Rep could be used alone for some low-stim athletes, it’s more suited to being stacked with a more fully dosed pre workout, and that’s where today’s AML offering comes into play. AML Pre Workout is an all around monster performance enhancing formula that packs the energy punch of a gorilla!

The breakdown is just ahead, but first, take a moment to check the best deal and sign up for PricePlow alerts:

AML Pre Workout is a real workhorse of a pre workout that uses three semi-transparent blends to enhance muscular power, growth, and endurance. It packs quite a wallop at 400mg of caffeine, but if you can handle the surge of energy, you’ll be well rewarded with one of the better constructed pre workouts on the market.

Right from the first ingredient, it’s pretty clear that this supplement is meant to take on PRE Jym by Jim Stoppani… but it looks even heavier on the muscle-builders:

Where are the 90 calories from?!

A few people asked where the 90 calories are from. We had a feeling this was for FDA compliance, but to be sure, we asked AML and they responded:

So technically speaking, this is compliant with the FDA. However, we do not believe these truly contribute to actual caloric energy.

As a sidenote, amino acids such as BCAAs (which are not in this supplement) actually do provide some caloric energy, in case anyone is counting their calories to an insane degree.

On Sweeteners and Flavoring 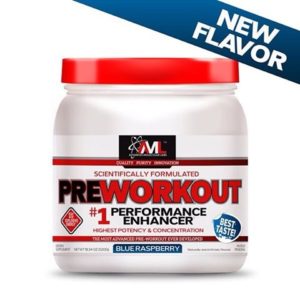 The newest flavor just added to the AML line up is Blue Raspberry. Will you choose this or Fruit Punch to power your workouts?

AML’s Pre Workout contains no artificial colors but does contain some artificial sweeteners (Ace-K and Sucralose) as well as one natural one (in the form of Stevia). The good news is that Stevia is listed first among the sweeteners and Sucralose last, which more and more people are in favor of – we assume this allows AML to use less sucralose, a trend many have enjoyed lately.

As for flavoring, AML Pre Workout comes in two tried and true flavors: Blue Raspberry and Fruit Punch. These have long been used by the industry and can sometimes vary widely in terms of overall taste.

Although many of us internet supp junkies are always looking for fancy and fresh new flavors, these are the two flavors that sell the most when introducing a new supplement. 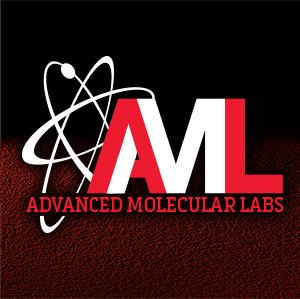 Advanced Molecular Labs is an up and coming brand developing interesting products. Click to read more!

AML Pre Workout is indeed a very, very well dosed pre workout formula, especially when used at a full scoop. Honestly, though, what else would you expect with someone as well versed as the guys who brought you Muscular Development?!

Provided you can handle the 400mg of caffeine here, AML Pre Workout should most definitely help you step up your workout game the next time things may have seemed to plateau for you in the gym. And if you need even more strength this month, the Peak ATP in Power Rep is there for you too.

Click the image to the right to read more about Advanced Molecular Labs. But so far, so good!