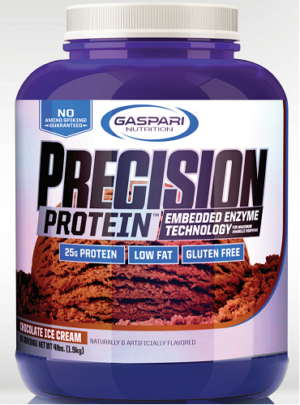 Gaspari’s tirade continues with the release of Precision Protein and an industry-first optimized leucine form of whey.

It’s no secret that Gaspari Nutrition has been on an absolute tear since Jared Wheat (owner of Hi-Tech Pharmaceuticals) bought a portion of the company back in April 2016. Since then, it’s been hit after hit for Gaspari as they’ve steadily reclaimed their Alpha status as one of the cutting edge companies in the supplement industry.

Now that they’ve restored their former glory we newly updated releases, it’s time for them to cement their place as one a true innovator with some original supplements… and once again, they’ve outdone themselves with this latest product.

Precision Protein is a first of its kind protein that employs a revolutionary form of whey that’s being touted as a “breakthrough in Whey Protein supplement technology.”[1]

We’ll get to the breakdown in just a second, but first take a moment to check the best deal and sign up for PricePlow alerts:

WOW. We expected this to be good, but we didn’t realize it would taste this good. Check out the neapolitan flavor: It’s broken down into the three layers of chocolate, vanilla, and strawberry! 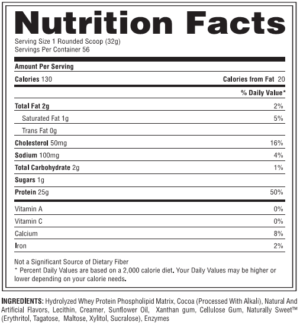 The magic recipe that sets Precision Protein apart from all other proteins currently available is it employs 100% hydrolyzed whey isolate to jack up the anabolic response by increasing the bioavailability and release rate of Leucine peptides. This is accomplished by Gaspari’s patent-pending Embedded Enzyme Technology (EET) which serves to enhance the anabolic actions of the protein powder.

EET is a specialized two-part hydrolysis process for the whey protein:

Through this unique process, EET is able to confer better muscle-building benefits than more traditional forms of whey due to the increased leucine content of Precision Protein.

Take a look at this video from the makers of EET for a little more info on just how it works:

To help further explain the benefits of Precision Protein, we contacted Gaspari R&D man VaughnTrue for some real “insider” knowledge:

“As you and most of your readers know, protein itself is made up of long chains of amino acids that ultimately get broken down or hydrolyzed in the body. The body is very efficient at breaking these long chains down into smaller peptides it can use for muscle growth and repair, however more often than not, the long protein chains are hydrolyzed into peptides which are needed for normal functions in the body…

Precision Protein forces the body to stay out of the hydrolysis process, and instead forces it’s own rate of hydrolysis on the protein chains by targeting the specific spots in the protein that allow for Leucine Peptides to be released. This means Precision Protein gives users significantly higher rates of Leucine Peptides once consumed than any other protein product in the world.”

Basically, the higher the level of Leucine peptides in a protein, the greater anabolic potential of the protein. This is because Leucine, more than any other single amino acid, has the highest impact on mTOR activation[2], muscle protein synthesis, and PGC-1a4 mRNA (a new isoform that governs muscle hypertrophy).[3] 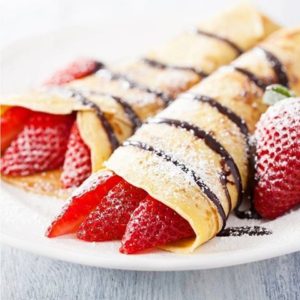 Ready to whip up some tasty, and highly anabolic, protein crepes courtesy of Gaspari?!

Rounding out the ingredient panel is the usual assortment of additives and sweeteners that you’ll find in most other protein powders including natural & artificial flavors, lecithin, guar gum, and cocoa (for the chocolate ice cream flavor).

Additionally, Gaspari uses its trademarked Naturally Sweet blend to sweeten the protein which is comprised of erythritol, tagatose, maltose, xylitol, and sucralose, in that order. The addition of these sugar alcohols allows for a lower amount of sucralose, which has been a trend many users have sought.

Each tub of Precision Protein will contain a whopping 56 scoops per tub, which means that it’s coming in at least a 4lb tub. Each scoop weighs in around 32g and has the following macros / calories:

Who is this for?

There are a few prime audiences who should be interested here: 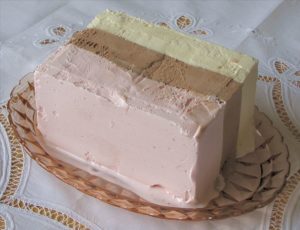 As soon as it is available for purchase, Gaspari’s Precision Protein will come in three different flavors: Chocolate Ice Cream, Vanilla Ice Cream, and the first of its kind Neapolitan Ice Cream, which will actually have the three separate layers in the protein tub of chocolate, vanilla, and strawberry!

It’s plain to see that Gaspari has no sign of resting now that they’re back on top of the mountain in the supplement world. We love seeing old products reformulated into new, and are still awaiting SuperPump 250 at the time of press, but it’s also great to see brand new ones too. Precision Protein is the latest innovation from the company who used to define that very word.

Enhanced anabolic potential aside, one thing we do know, is that Gaspari’s flavoring is always on point, and this stuff is going to taste damn good! If we get to enjoy increased leucine levels and experience greater muscle growth as well, all the better!

Stay tuned for updates and an upcoming review on Precision Protein once it’s released! 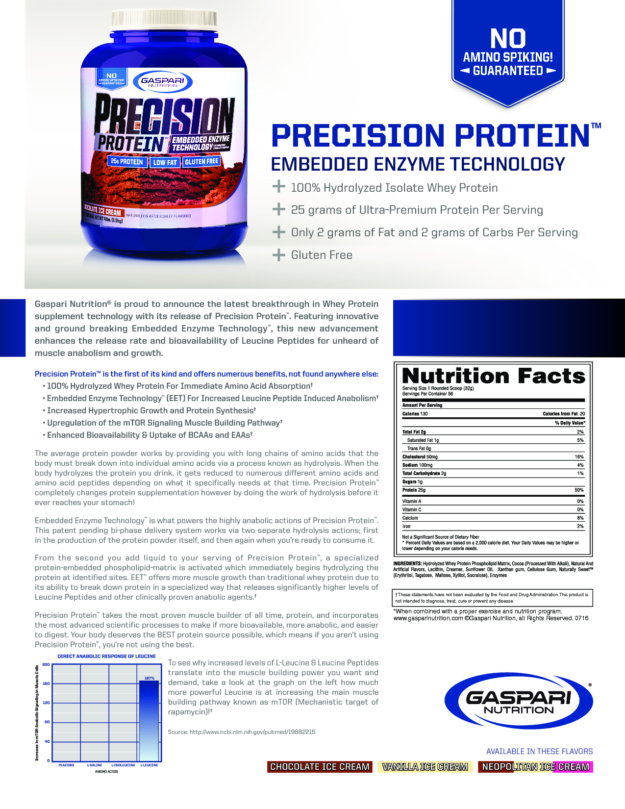 The entire official write-up on Precision Protein – Click to zoom in!