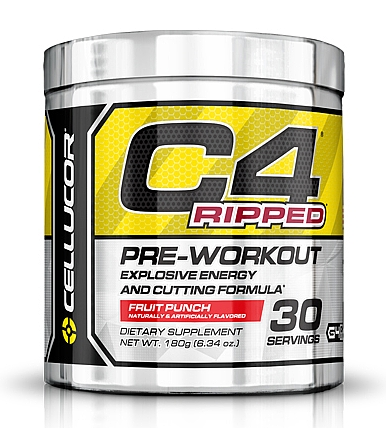 The C4 version dedicated to weight loss. But is it any better than the original C4, which had synephrine?

When Cellucor announced their new G4 (4th Generation) product line, it included several variations of the new C4 pre workout. C4 Ripped is the fat burner of the bunch, but in pre-workout form.

Note that existing fat burner Super HD (also upgraded with a new formula) appears to be sticking around as well. The new content in C4 Ripped seems to focus on athletes in a cutting cycle rather than your average weight loss dieter who’d use Super HD.

This is a product with both some pros and cons, and whether or not you want to try it will come down to a few factors. The first of which is price — so compare prices below and sign up for price drop updates to get notified as more stores get it in stock:

This is a pretty unique product niche – in fact, our Best Pre Workout buyer’s guide doesn’t even really have a “weight loss” section!

What are the C4 Ripped ingredients?

The core difference between the two Cellucor products is the ingredients used in the new C4 Ripped Blend, which has some good and some questionable ingredients inside. 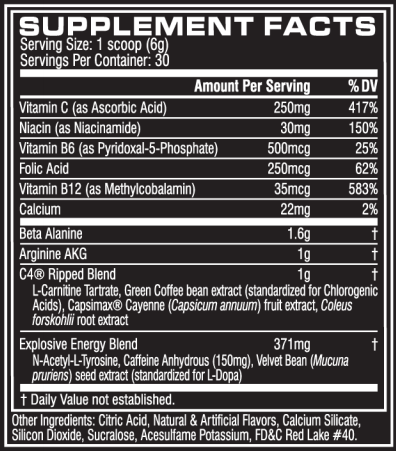 The C4 Ripped Ingredients / Supplement Facts. We analyze below, and have a few comments/questions.

One thing that surprised us with the stimulants in the Explosive Energy Blend is that synephrine does not make a return for Ripped, even though it was in the original C4 Extreme formula.

Ripped is leaning heavily on that caffeine and tyrosine — it doesn’t even have the TeaCor that some of the other C4 products have! (TeaCor is Cellucor’s new Theacrine blend that will generally make the feel of caffeine last longer).

For the breakdown, let’s skip right to the new and different stuff in C4 Ripped:

There’s both good and bad here, but the negatives don’t seem to outweigh the positives, so we think it’s worth a shot when you get it on price drop.

We understand this isn’t meant to be a hardcore fat-burning product for the seriously obese, and Cellucor is now in Costco so they must appeal to the masses, but even so, the content here is a bit hidden in proprietary blends.

Forskolin and capsaicin are good stuff, but we don’t know how they’re dosed behind the questionable green coffee bean extract. LCLT is a bit conditional to be useful for all adults, but we’ll always take it.

We have to wonder one thing, though: without a beta-2 adrenergic ingredient (such as synephrine or higenamine), will this work as well as the original C4 Extreme? It likely comes down to how well the forskolin and cayenne are dosed, so hope to feel some heat!

If you are a dieter, a fan of Cellucor, and want to try a diet-supporting C4 and you like to drink your pre workouts pretty quickly, then give it a go. We’ll be here for you when the prices keep dropping as more stores get it in stock:

Again, unique idea, and something not mentioned in our Best Pre Workout buyer’s guide!