We have an update of sorts on the whole “Does Driven Craze contain amphetamines?” saga. This new data is from May-July of 2013, but the study was finally published by the USADA (US Anti-Doping Agency) on January 22, 2014.

You can check out the quick news video here: 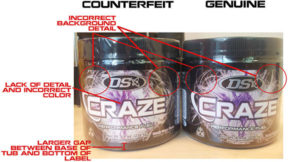 Craze is no stranger to controversy. The picture above is from a previous issue with counterfeit product in Europe.

In short, one of the abstracts claims that “A sports dietary supplement ‘CRAZE’ has been determined to be one of the sources of EAPB supply.” — EAPB being the designer PEA analogue, 2-Ethylamino-1-phenylbutane.[1]

There may be slightly different verbage in source [2], so check that out as well.

Who Performed this Study?

The researcher, Dr. Victor Uralets, seems to have some experience in detecting drugs.[3]

Just some new news on some old data for those of you asking for info on our YouTube channel lately. We just had to beat this poor horse a little bit more, I suppose!