Pre-Kaged ELITE: The Next Evolution in Pre-Workout Supplements

Welcome to the evolution.

For eight years, we’ve been covering Kaged Muscle Supplements, which started with the legendary Pre-Kaged pre-workout supplement. We’ve always stood firm behind the brand’s mission and goals, which perfectly align with our high-demands for the industry: 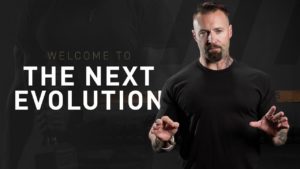 Welcome to the Evolution. Kaged Muscle is now known as Kaged, and they’re kicking 2022 off in truly Elite fashion…

This year, Kaged makes the next step in their evolution. They’re taking their mission to provide cleaner, healthier, science-backed supplements to another level. An elite level.

As explained on Episode #058 with Michael McClane and Darin Decker on the PricePlow Podcast, Kaged Muscle has been renamed to Kaged. They showed their rebranded look and discussed where they’re headed next for 2022 and beyond. 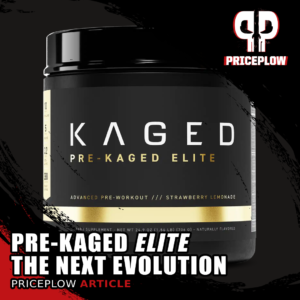 It all starts with Pre-Kaged Elite.

Pre-Kaged Elite: A pre-workout for athletes who need more

Pre-Kaged Elite is the next level of pre-workout supplements developed for elite athletes who need more from their workout. It provides massive energy – but also clean energy – and takes Pre-Kaged pumps to explosive new heights.

Inside, you’ll see some eye-opening stats, such as 10 grams of L-citrulline and 388 milligrams of naturally-sourced caffeine in a 35 gram scoop that rivals your protein scooper. From an efficacious dose of CreaClear creatine monohydrate to a rarely-seen 2.5 gram dose of tyrosine to added nitrates, Pre-Kaged Elite has it all – and then some.

In this article, we discuss this behemoth of a pre-workout supplement after showing our coupon-based price listings below. But make sure you sign up for our Kaged news alerts, because there’s clearly a lot more coming this year:

An insane 35 gram scoop of Pre-Kaged brings you the following gargantuan formula, fronted by 10 grams of citrulline and 388 milligrams of caffeine:

As always, remember that Kaged uses natural flavor systems, natural colors, and as little sucralose as possible by primarily relying on stevia’s steviol glycosides for sweetening.

The Evolution of Kaged

On January 2, 2022, Kaged published their Evolution Event, where spokesman and founding partner Kris Gethin tells the genesis story of Kaged Muscle along with their founding principles. He then discusses their name change to Kaged, shows their new rebranded look and apparel, and where they’re headed next:

Their new slogan, changed from “Evolve With Us”: “Never Stop Evolving“.

“More than a slogan, this is a declaration of relentless growth. It’s a call to action to hit the gym with consistency – to get up early without the snooze button – to optimize your nutrition with precision and stay disciplined to your own evolution.

No weak excuses. This is the Kaged lifestyle and if you join our family, you are living it with us.”

What’s coming next for Kaged?!

Watch the video above until the end — you’ll see some incredible teasers of things to come:

Both of which will stick to the company’s stance on natural, organic, ethically-sourced ingredients.

As a reminder from Episode #058 with Michael McClane and Darin Decker on the PricePlow Podcast, the classic Pre-Kaged and Pre-Kaged Sport will remain, although they’ll eventually be switched to the new minimalist tubs.

Pre-Kaged Elite is the Elite Pre Workout of 2022 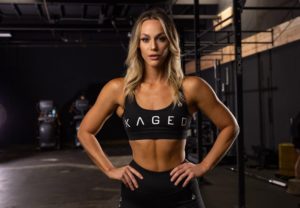 The wonderful Tawna Eubanks McCoy is ready for the next evolution of Kaged. Are you?

This formula is exactly what they said it is: elite. We’re only a few days into the year, and we already have what could potentially be the best pre-workout supplement of the entire year!

There’s no way around it – this formula is beyond massive, and it’s larger than a lot of protein powder scoops we’ve used. It’s mind-blowing that in a time when companies are clamping down on their L-citrulline use or ditching the ingredient altogether due to supply chain issues, Brian Rand and the team at Kaged have doubled down (nearly literally) with a 10 gram dosage – and the science backs up why!

If this is what the new Kaged is going to look like, then count us in. We’ve always stood behind the brand’s stance on testing, using as many natural ingredients as possible, and efficacious dosing. Pre-Kaged Elite just takes it to a whole new level, going to lengths that very few are willing to go to.

Are you ready to start your evolution?