For years, the team at Kaged Muscle has been waking you up with powerful, energy-driven supplements like Pre-Kaged, Clean Burn Amped, and the new Hydra-Charge Amped. But now it’s time to bring you back down to earth, helping you rest, relax, and get a full night’s sleep — all so you can do it again tomorrow! 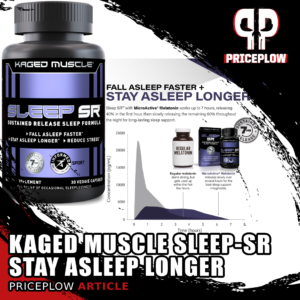 Sleep SR is a one capsule sustained-release sleep aid that will have you feeling good with more serotonin, and keep you asleep with long-lasting melatonin!

Kaged has recently released Sleep SR, a sustained release sleep aid that comes in just one capsule to help you fall asleep faster and keep you asleep longer, letting you wake up feeling more refreshed.

It’s made with a sustained release melatonin ingredient that keeps working throughout the night, but is also fronted with a trio of ingredients to boost serotonin production as well, doubling as a stress reducer. In addition, you can sleep like a baby using milk-derived Lactium, which can boost GABA expression and settle you down even further.

If sleep has become your enemy, and your standard melatonin supplements haven’t kept you asleep throughout the entire night, keep reading – Sleep-SR may be exactly what you’re looking for – and it’s available in just a single capsule.

The research is covered below, but first, take a moment to check out PricePlow’s prices and sign up for our Kaged news alerts:

In just one capsule, you get calming, relaxing, and sleep-inducing effects from the following ingredients:

As always, Kaged Muscle supplements are 3rd party tested and shown to be free of banned substances, all backed by a 100% money-back guarantee.

Per the dosage directions, take just one capsule 30-60 minutes before bed.

One Sleep SR Cap is all it takes 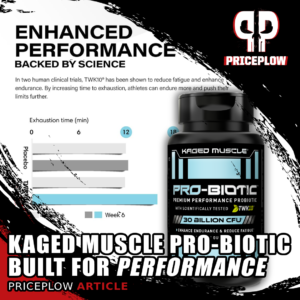 Kaged Muscle Pro-Biotic is a probiotic supplement using Lactobacillus Plantarum TWK10, which has been shown to improve athletic performance (likely by generating more ATP in the digestive tract)!

In just one capsule, we have a solid feel-good sleep aid that hits a couple of pathways, and hits them properly. It’s fine to throw some melatonin at the problem, but it’s even better to do it properly — by providing you with the substrates to make your own melatonin while also giving you a time-released boost exogenously.

With this and the recently released Pro-Biotic, Kaged Muscle has put out some incredibly effective supplements lately, introducing new ingredients to the market — and both are convenient, coming in at only one capsule!

This isn’t one of those supplements that is going to knock you out for three days – this is a wisely-formulated sleep aid that will gently bring you down, and allow yourself to come back up without drama. If you’ve been on edge and aren’t sleeping well because of it, work on knocking out some of that stress – but also give yourself the tools to generate some serotonin while you’re at it with a single cap of Sleep-SR.