BEAM’s Pre Workout Will Ensure Your Training Sessions Are Amazing

BEAM stands for Be Amazing, and it’s meaning goes way beyond the supplement industry.

When a new supplement company launches, a pre workout is almost always in the line up. It’s a staple product for any gym goer, and a pre workout’s formula can say a lot about a brand. Not only does the owner of BEAM, Michael Yewdell, have an amazing story, he also has nine years of experience in the supplement industry. So when he finally got the chance to work with some of the best manufacturers, ingredient suppliers, and formulators out there, Michael was ready to develop an amazing lineup – led by an amazing pre workout.Michael’s mission was to develop premium products that deliver the best results, so you can reach your goals faster and continue to progress year after year. Let’s see what makes Pre Workout rise above its competitors. 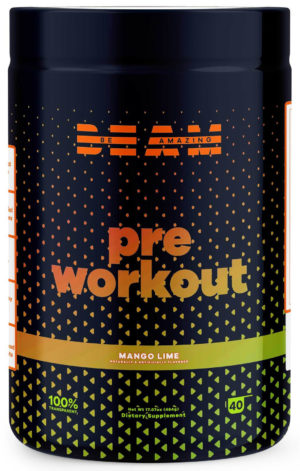 Mango Lime BEAM Pre Workout is a premium product with custom flavors to give you the best results.

Ask any supplement company, and they will tell you their pre workout is the best on the market, but there’s something different about BEAM’s Pre Workout. It’s hard to explain by just looking at the supplement facts panel, you really just need to try it for yourself.

BEAM Pre Workout has a comprehensive formula that contains several trademarked ingredients — clinically-dosed and backed by science — to create the ultimate experience. It is vegan-friendly, gluten and soy free, and contains no artificial dyes or colors. It also has natural caffeine to give you a steady rise in energy, while avoiding the dreaded crash. Not to mention BEAM brings outstanding flavors that will make you want to sip on it, rather than jug it down while holding your nose.

In this article, we’re going to pull back the curtain on BEAM’s Pre Workout formula to show you the benefits, purpose, and science behind each ingredient. But before we start, make sure to sign up for BEAM news and deal alerts to stay up to date with all they have coming up – and check out the backstory behind the brand by reading — BEAM: Something Amazing Has Arrived!

As mentioned above, BEAM Pre Workout features a comprehensive formula with four trademarked ingredients to get you fired up for a big training session. It has a fully transparent label, so you know exactly what you’re getting in each scoop. That’s what we expect from any premium pre workout supplement. 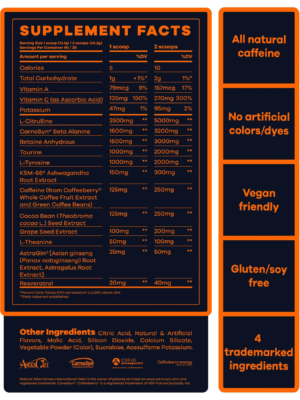 You can’t say this supplement facts panel is not loaded.

The label is loaded with over ten ingredients that are at or above clinical dosages, so you may not even need a full serving to get an epic workout. Thus, the supplement facts panel lists dosages for both one and two scoop servings. But in this ingredient analysis, we’re going to see what a full 24.2g two scoop serving delivers! 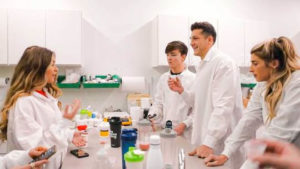 BEAM takes a incredible amount of time to create custom flavors, and it really shows!

BEAM uses an in-house flavor team to develop delicious flavors everyone will enjoy. Not only does their Pre Workout taste phenomenal, they may have one of the best tasting vegan proteins on the market. Which if that says anything, it shows they’ve spent an incredible amount of time getting each of their products’ flavors perfect before the launch!

BEAM is here to provide exceptional products to help you Be Amazing.

BEAM may be a new company, but the quality of their products are outshining several big names in the industry. How is BEAM able to do this better than the majority other companies?

It’s all about quality control, and BEAM prides themselves on overseeing every step of the process that goes into developing a product. From sourcing and importing the highest quality raw ingredients, to creating custom flavors, and making sure the manufacturing, and final end product is kept to the highest standards. This is what makes BEAM’s products truly deliver amazing results.

If you’ve never tried any of BEAM’s products, their Pre Workout is a great place to start because it fully encompasses what their team is capable of. What’s truly exciting is that this is just the start, and BEAM is dedicated to constantly improving. They’re not here to just put out a few good products and sit back — BEAM is hungry for continuous progress and won’t stop until they become a leader in the industry.

We’re not sure what they will come out with next, but we know whatever it is, BEAM will create an epic product. BEAM is ready to make their mark, and PricePlow will be the primary supplement media platform that will follow their every move, so stay tuned to our BEAM Supplement news!

See our interview with Michael Yewdell

Ben sat down to interview Michael to hear Michael’s incredible story and the creation of BEAM – listen to it below: