Since the start of PricePlow (over ten years ago!), Controlled Labs has forever been a fan-favorite brand. We’ve always loved their formulations, and greatly appreciate brands who live ahead of the curve. This is evidenced in them starting — and winning — the EAA vs BCAA battle over a decade before most others with Purple Wraath, but also their amazing Orange Brainwash nootropic powder. 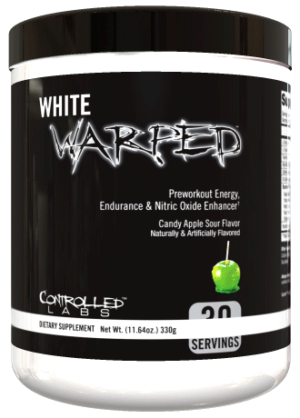 The next in the “white” line of pre workout supplements from Controlled Labs, it’s time to get White Warped!

Now it’s time to give the “White” pre workout series a refresh. Coming off of a successful campaign in White Flash, Controlled Labs is bringing it back to their roots with the White Warped pre workout supplement.

Flavor and Energy that won’t cost you $2.00 in stores

This is the newest addition to their colorful selection of products, and appears to be a great one at that – especially for the users who are sick of us reviewing workout supplements that cost multiple dollars per scoop. White Warped is here as a lower-cost option for the gym goers who know what they want, while still providing great effects and an awesome taste. The company is touting White Warped as a better-tasting pre workout than their previous formulas, which we’ll never complain about.

A lot of the dedicated fanbase of Controlled Labs comes from various forums, but with this new product, they are trying to get their product out to the masses, where cost and flavor are two high priorities when deciding on a supplement. Controlled Labs is a great brand, and we’re glad to see them expanding their sphere of influence in the market.

Before we get into the ingredients of this new product, be sure to sign up for PricePlow’s coupon-driven deals, and don’t forget to sign up for Controlled Labs news alerts to stay ahead of the game on this brand:

Right off the bat, let us state that this has about 325mg total caffeine, so it’s a true one-scooper, which makes the price even more attractive.

Thankfully, with its caffeine blend, White Warped won’t over-stim you and have your brain warped.

A word from Controlled Labs on the label

We’re always into what Controlled Labs is up to, so we asked for their thoughts on this formulation:

We went with a great core formula on White Warped that will produce great effects. It also is much cheaper per serving (almost half the price than flash at $29.99 for 30 servings) and way better tasting than previous formulas. We anticipate that this will surprise people as to how well it works, and that by including Spectra for it’s nitric oxide enhancing effects alongside citrulline and agmatine that it’ll be a great powerhouse product.

We’ve seen Spectra before, but this was honestly our first time doing a bit of a deep dive on it, and we have to say that we’re excited for the combo.

Controlled Labs exploded back on the scene with a powerhouse nootropic supplement titled Orange Brainwash. Can you tell we’re huge fans of this one?!

Below is an up-to-date list of the flavors available:

All sound great, but we’re most looking forward to Strawberry Jelly Bean!

Branching Out and Keeping to their roots

On the note of those flavors, Controlled Labs added that they are committed to bringing the best possible formulas for their target audience, and that premium products like Orange Brainwash, Blue Sugar, etc. are here to stay. We hope people enjoy our new products with an emphasis on improved taste while still providing the best formulas possible.

Takeaway: Another in the great line of Controlled Labs pre workouts

Finally, PricePlow covers a pre workout with some mojo that’s internationally compliant and won’t bankrupt you!

Controlled Labs is touting serious flavor improvements with this one!

Controlled Labs has generally been a tight-knit, forum based community, delivering high quality products with some insane labels, but also with a higher price tag. They are clearly still dedicated to bringing high quality products (Orange Brainwash and Orange Triad anyone?), but they are now offering some unique, cost effective, and better tasting options, which should appeal to a much wider audience.

We’re looking forward to getting White Warped in for some taste and performance tests, especially the unique sounding Strawberry Jelly Bean.