Battle Shakers: The Most Bombastic Shaker Bottles on the Planet 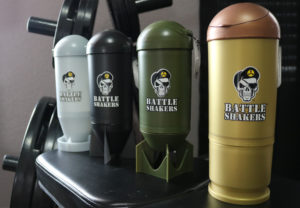 Most athletes who train with supplements care most about what’s on the inside of their shaker cup. From protein powder to pre workout supplements to amino acids, we use and abuse our shakers, often giving them little thought outside of the occasional deep-cleaning (hopefully).

One brand has set out to change that, and they’re doing it with a boom. They’re Battle Shakers, and they’re a startup that’s literally shaking up the boring old shaker bottle space with some serious flare.

If you’ve watched our YouTube channel or seen our Instagram story lately, you’re likely already familiar with them, as they’ve become a token part of every mixable supplement review we’ve done. Now it’s time to take a closer look. 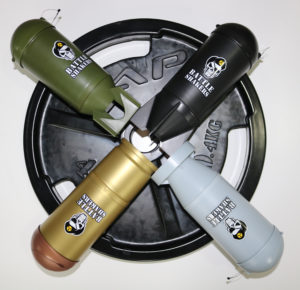 Weaponize Your Workouts with Battle Shakers!

I’m happy to announce that Battle Shakers are now the official Shaker Bottle of PricePlow, a sponsorship I wouldn’t have taken had I not fallen in love with these bad boys.

We’ll get to the specs below, but first check out our 15% PRICEPLOW coupon and sign up for our Battle Shaker alerts below so you’re contacted when their next wave of warfare is out:

Below is everything you need to know about these legendary bottles, but you can also watch my review on YouTube first:

Battle Shakers are free BPA & DEHP free, which is what you want to look for when buying a plastic cup. Let’s do a “shallow dive” on these two chemicals, referencing some well-cited studies if you want to dig deeper:

Stay away from Bisphenol A 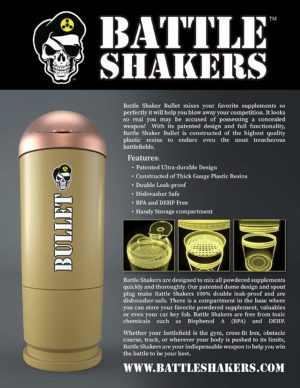 Stay Away from BPA and Don’t Ever Hold Protein in DEHP!

BPA stands for Bisphenol A, which is a chemical used in many plastics and epoxy resins. There is a lot of data correlating BPA to cardiovascular disease and metabolic syndrome, but correlation does not equal causation. More importantly, BPA “exhibits hormone-like properties” and “can mimic estrogen to interact with estrogen receptors α and β, leading to changes in cell proliferation, apoptosis, or migration and thereby, contributing to cancer development and progression.”[1]

There’s a massive amount of research on BPA in terms of mechanism of action using in vivo and in vitro systems as well as correlational / epidemiological data showing potential harm. But we’re not here to do a deep dive on BPA right now, we’re just here to tell you to keep that stuff away from your food and drinks, as many of us are trying to keep estrogen at bay, not the other way around!

If you’re interested in learning more, however, the citation above[1] is a great place to start, as it cites 122 other studies regarding BPA and related “xenoestrogens” and their dangers.

Don’t Ever Hold Protein in DEHP

After BPA was largely removed from the plastic food/drink containers market, DEHP became the next concern. This stands for di (2- ethylhexyl) phthalate, and is used for plastic flexibility.

Just like BPA, it’s wise to keep DEHP as far away from your system as possible — the entire class of phthalates are known as “gender benders” (yes, you read that right), and many researchers have found them to cause serious adverse effects on the endocrine system,[2] especially in males.[3]

It’s tough to make guarantees in the world of diet, sports nutrition, and supplementation. But I will make you a guarantee with Battle Shakers: they are the ultimate conversation starter. If you use these at the gym with your headphones off and nobody makes a comment the first few times they see one, it’s time to look for a new gym.

It’s not that we’re trying to attract attention, it’s that we’re trying to have a bit of fun and do something different. If you don’t want the occasional comment, you may be best keeping this in the car or locker for pre- and post-workout, because intra workout, there’s no way you won’t be asked about it!

Meanwhile, consider this: if you’re the kind of person to use a battle shaker, then the kind of people who politely ask about Battle Shakers are also the type of people you want to hang out with and train with. Boom – now you’ve just found your buddy to go to the range with!

When Tony and Pete first approached me about Battle Shakers, I first thought about the Price part of PricePlow – I started this site to save people money, not get them to buy more stuff. At times, I’ve learned to turn that part of my brain down. It goes without saying that if you’re on a shoestring budget, I’m not going to tell you to spend your next paycheck on a set of cups. Many of our followers are here to look for deals and nothing else, but that’s not everyone here. (non-affiliate link!) A lot of our followers “live the life”. Their peers spend hundreds of dollars at the bar — we do not. We buy food, supplements, books, and training sessions. We look forward to gym time, and we look forward to having the best experience possible from it – and that often starts with the pre workout straight out of your shaker cup. 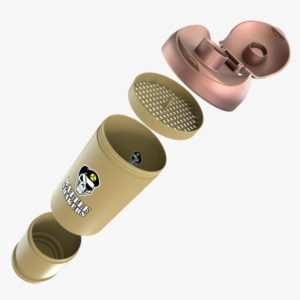 Use coupon code PRICEPLOW to save 15%!

So I gave the cups a shot. Why not? I’m not one to turn down free stuff, especially if that free stuff is in the shape of munitions.

And then something funny happened: I fell in love with these damn things. They’re silly fun in reviews, but they’re also something else — mood gauges. One of my favorite things to do is to “decide” which shaker cup I’m going to use at a given moment.

It may seem something small to get excited about, but it’s the little things in life that we get a kick out of. I have a one year old in the house and the days of leaving weapons and knives out are over. Going out to concerts and events isn’t much in the cards right now. I get negative five hours of sleep per night.

So you know what? Let me have my damn protein shake out of freakin missile. At this point, it’s really all I ask for, and it puts a smile on my face.

As mentioned above, it’s the little things that we grow to enjoy, and these little things are sure to put a smile on your face. They’re the ultimate gym conversation starter, and are the most fun way to take down your favorite beverage, whether it’s pre, intra, post, or some much-needed energy.