Note: This product is now titled “Pre-Training” instead of Maxed Out, but the same formula remains! 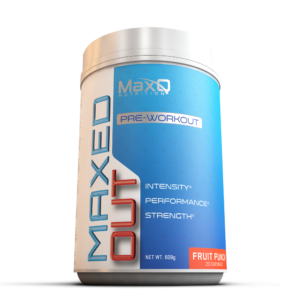 MaxQ Nutrition has crafted a true world beater in their Pre Workout which contains everything you’d want to have a Maxed Out workout!

The glory days of the ultra-concentrate micro scoop pre workout are long over. Today, there is an arms race among supplement companies to make the biggest, baddest, most all-encompassing pre workout there is.

MaxQ Nutrition is a newer supplement company that may have just set the benchmark for single serving scoop size with their Maxed Out Pre Workout. The scoop size rivals that of most protein powders on the market and includes virtually every proven ergogenic you’d want (or need) to support your training efforts.

Yep, this one’s gonna get wild and we can’t wait to hear your comments.

Before we go any further, take a moment to sign up for PricePlow alerts and receive the very best deals from around the web:

If Maxed Out isn’t available above, see MaxQNutrition.com

MaxQ has crafted quite the well-dosed pre workout. Each serving weighs in at a monstrous 30g and contains numerous clinically dosed ingredients to power a truly maxed out workout.

As you can see, this is quite the monster pre workout formula, and wondering just how it came to be and who these MaxQ guys are anyway:

“The MaxQ Nutrition founders have worked with countless professionals in diverse athletic fields–from the IFBB Pros and NFL to the NHL and Ironman competitors. They also have their own backgrounds in competing and training. The formulation of the products relied heavily on professional athlete input and professional sports approved ingredient compliance. That’s why you won’t find a ton of “smoke and mirrors” stimulants. They aren’t necessary for a preworkout—feeling “insane” isn’t the purpose of a preworkout—its boost intensity, performance and strength. Not many stims are approved by pro sports for that reason.

We are professional sports compliant in formulation, internationally approved and distributed and the recipients of consistent feedback on the product from the pros. They are wowed by the panels, ecstatic about the results and grateful for the ‘one stop shop’ formulation that combines everything they need in one bottle so they aren’t dropping hundreds on separate supplements to achieve their training and competition goals.”

MaxQ currently only has one flavor available for their Maxed Out Pre Workout — Fruit Punch. Hopefully, as the brand continues to grow, so will the number of flavors.

It truly is a golden era in the pre workout landscape. The number of transparently labeled, clinically dosed products is higher than ever before, and from our view, will only keep increasing. The big decision for you, the consumer, is going to be the stimulant load in each one. Those that like the “cleaner” feel of just caffeine will find a bonafide winner in MaxQ’s Pre Workout. Those of you that want to “crazier, more exotic” stim kick can check out our Best Pre Workout Guide to choose your pleasure!

Before we go any further, take a moment to sign up for PricePlow alerts and receive the very best deals from around the web, but you should also see their website below and use our coupon until we see it out in our stores!

If Maxed Out isn’t available above, see MaxQNutrition.com