Breathe easy, Arnold fans. The nightmare is finally about over.

After years of his good name being dragged through the mud, Arnold Schwarzenegger has finally terminated his relationship with MusclePharm.

Today we announced the conclusion of Governor Schwarzenegger's relationship with MusclePharm. pic.twitter.com/pOp1e9Edl4

In case you can’t read it, it follows below:

Today, Arnold Schwarzenegger announced that he has concluded his relationship with Denver-based nutritional supplement company, MusclePharm.

“After collaborating with MusclePharm for the past three years on the Arnold Series, given the distractions caused by the significant issues that MusclePharm faces, Arnold believes that the time is right for him to move on and pursue other opportunities with partners that are better suited to help him fulfill his ultimate vision to promote fitness around the world,” said Governor Schwarzenegger’s spokesman, Daniel Ketchell.

“Governor Schwarzenegger remains passionate about promoting health and fitness worldwide. He has been on a crusade to promote fitness for more than four decades, including an appointment as chairman of President George H. W. Bush’s Council on Physical Fitness. Governor Schwarzenegger looks forward to his next endeavor as part of his mission to help everyone discover the benefits of health and nutrition”

Reading between the lines, it’s clear what Ketchell’s really trying to say: “We’re sick of dealing with this nonsense and we’re finally out. Now let us go do something else” (likely of equally crappy value, as things have shaken out over time).

What an ironic marketing message MusclePharm used here in this one…

Very telling is that there wasn’t even a “thank you” to MusclePharm in the statement, which one typically says at the end of business relationships – even mediocre ones.

This agreement will likely officially terminate on July 25, 2016, which is three years after it was originally signed, per an SEC report.[1] This leads us to an important point:

Sales goals not met (thankfully for Arnold at this point)

Interestingly, this contract would have been automatically extended another two years had “certain net sales milestones are met, as specified in the Agreement.”[1] Clearly that didn’t happen, because we’re here discussing the end of the contract. Ironically, the failure to make sales goals was likely a sigh of relief for Arnold at this point, who probably just wanted to get the hell out of the relationship.

So this marks the end of a quite tumultuous few years, and may be one of the final nails in the coffin for the entire MusclePharm company itself.

What distractions and issues?

Sadly, many commenters on @ketch’s Twitter still don’t understand what many of us have known this entire time: The Arnold Schwarzenegger Series quickly became synonymous with MusclePharm’s lowest-quality products.

Iron Whey is nearly cheaper than dirt, tasted awful, and was originally loaded with glycine and taurine (ie amino acid spiked), while Iron Mass is the product that truly did get the company sued for amino acid spiking! Additionally, a serving of Iron Cre3 had just 1g of creatine nitrate, which means you were literally getting 22.3% of the lowest daily research-backed dose of creatine. The story goes on.

At this point — I’m just gonna say it: Whoever’s idea it was to take one of the best bodybuilders and put garbage supplements in his name is an equal piece of garbage, and an idiot too. The biggest question is, Was it Brad Pyatt? Did Pyatt know how terrible these products were? 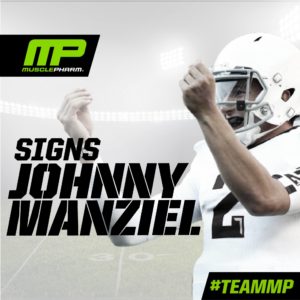 From a consumer standpoint, the Arnold Series was supposed to be like the Man himself: top notch! You could have made a tub of protein filled with the finest stuff and sold it for $75. The consumers would have eaten it up, and you’d still have made a profit.

Instead, you put glycine and taurine in it. Instead, you underdosed quality ingredients. Instead, you used proprietary blends. And instead, you decided to waste time sponsoring people like Johnny Manziel (called that one, didn’t I?).

And in the end, you got your asses sued.

Whoever you are, and I hope you’re reading this — you should be banned from the supplement industry and from bodybuilding forever. You ruined something that could have been incredible, all for a shady corporation that could hardly ever profit anyway!

It’s one thing to make a shitty product. Who doesn’t have a dud here or there? But it’s another thing to put an entire lineup of shitty products in the name of the one guy who pioneered this entire community. Shame on you, MusclePharm.

What’s next for Arnold?

Sounds like Arnie’s going to focus on what he loves – keeping people fit. You can read about the President’s Council on Physical Fitness at www.fitness.gov – it’s co-chaired by Drew Brees and Dominique Dawes, and has an impressive list of council members.

We’re not sure how much time MusclePharm took up for Arnold – likely not all that much – but we hope to see more fun commercials and gags like the one below:

Either way, once that last tub of Iron Mass is sold and off the shelves, it will likely be quite a sigh of relief for the Governor.

What’s next for MusclePharm?

Who really even cares anymore?

The MSLP stock has been under constant pressure since it went public… Where does this one end?

While we can’t confirm it, we believe that it’s become increasingly clear that “the athlete’s company” is looking for a liquidity event. They’ve shed athletes, removed idiotic expenses (like when the SEC caught then-CEO Brad Pyatt using company funds to pay for the birth of his child), and in our opinion, they’re trying to make a few profitable products so that they can get sold and maybe get shareholders compensated at some degree.

And at this point, we just don’t believe that it’s going to successfully happen.

Originally led by Pyatt, who recently resigned six months after the aforementioned SEC investigation,[2] MusclePharm screwed their customers over in an already-fickle industry with high levels of turnover. What was cool five years ago is no longer cool these days. And MusclePharm, who made one consumer-facing mistake after another, is definitely not cool today.

Regarding the stock, we aren’t sure if Arnold’s sold his, but when he originally signed with them, they did award him with 780,000 shares of MusclePharm’s restricted common stock.[1] We have to believe that stock is long out of Arnold’s portfolio by now, though.

It’s an unfortunate story for anyone who invested in MSLP, looking to get in on the sports nutrition supplement industry. Sadly, we just don’t see you getting out ahead.

So when this MusclePharm nightmare is finally over some day, we can collectively say the same thing Arnold probably just said this past Friday: good riddance.