Are you still chugging a carbonated energy drink when in a pinch before your workout? Then Primeval Labs has some words — and an incredible new supplement — for you. 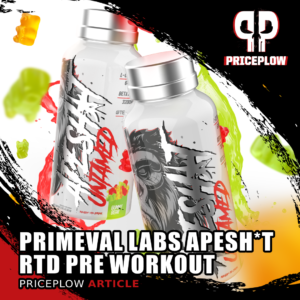 When Primeval Labs enters a niche, they enter explosively. Get ready to go Ape – no shaker cup needed.

Tired of the same old burp-in-a-can energy drink, the brand behind the Untamed series is launching a new Ape Sh*t Untamed RTD Pre Workout! This is an efficaciously dosed ready-to-drink pre workout supplement that you simply open, chug, and head in to go ape on the weights!

Unlike too much of its competition, it’s not carbonated, and is simply a convenient and delicious pre workout in a bottle, ready to go anytime. The energy blend has a total of 350mg caffeine (from two forms) with 30mg Theacrine — more than nearly all of those energy drinks. In addition, we have a solid pump and endurance stack on top of that.

Launching Ape Sh*t RTD in three not-so-boring flavors, Primeval Labs worked incredibly hard to destroy the “bitter back end” that you get with the scarce RTD competition, and there shouldn’t be any of that nasty “vitamin smell” we’ve gotten used to with energy drinks.

The whole breakdown is below, but as always, subscribe to our Primeval Labs news alerts and coupon-powered deals and get ready for the review: 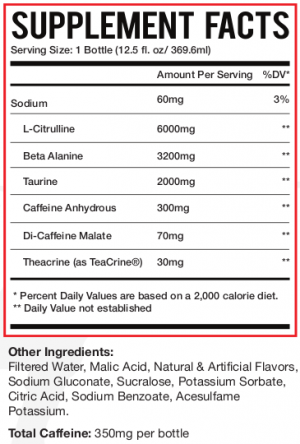 The nutrition facts / label. Several clinically-dosed ingredients in a bottle – better than what most do in a powdered tub!

It’s amazing to see how far these RTDs have come over the years. We’ve got clinically-dosed pumps, endurance, energy, and even a bit of cognitive boost: 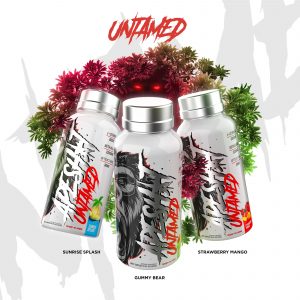 The initial three flavors launched. With a formula like this, we’re always going to hope for even more.

Below is a list of all of the known flavors of Ape Sh*t RTD, and their coupon-based prices in PricePlow:

If looking for the powdered pre workout, see our blog post titled The Ape SH*T Untamed Pre Workout – Go APE on the Weights!

Primeval Labs Enters the Drink Market in a Fresh Way

We’ve long been fans of Primeval Labs’ take on pre workouts (who hear remembers Adrenal Rush V2? We do!), and we love that they zig right when everyone else is zagging left.

The flavor kings are back, and now in bottle form!

With everyone and their grandmother getting into the energy drink space, it’s great to see someone sticking to what we love – training. Energy drinks are fun, but fitness brands should think fitness first, and that’s exactly what Primeval Labs did with the Ape Sh*t RTD.

No gut-wrenching belches. No low-caffeine video game marketing. And no amateur dosing of known effective ingredients. While everyone else is fighting over aluminum cans filled with bubbles, Primeval Labs is here to help you get it done in the gym. You can drink your bubbles later. But right here, right now, it’s time to go Ape Sh*t and TRAIN.