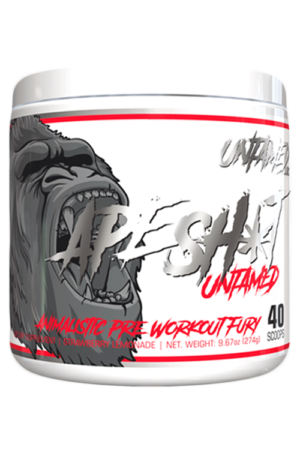 Just look at this tub! Ape Shit is an aptly named pre workout from new company Unatmed Labs that will have you going Ape next time you step in the gym!

Well, the day is at hand… a company finally made a pre workout called Ape Shit!

What brand is behind this madness?

None other than young upstart Untamed Labs, a “sub brand” that’s a part of the Primeval Labs family of companies.

Now, we know what you’re thinking — “this product is just capitalizing on the catchy name, but the formula is crap just like every other cleverly-named pre workout.”

Well, you couldn’t be more mistaken! Untamed (Primeval) isn’t playing any games here. Ape Sh*t is very well dosed and should make you want to go ape during your training sessions!

We’ve got all the details below on Ape Sh*t, but first, take a moment to check the best deal and sign up for PricePlow alerts:

Ape Sh*t’s ingredients panel is a tale of two labels. The first half is disclosed, so we can see how much pumps and ergogenics we’re getting, but the latter half of the blend (the Ape S*** blend) is proprietary, but the saving grace is that Untamed Labs has disclosed the caffeine content per 2 scoops (~274mg).

Note: Doses listed below are based on 1 full serving (i.e. 2 scoops). You’ll get 20 of those 2-scoop servings per tub. 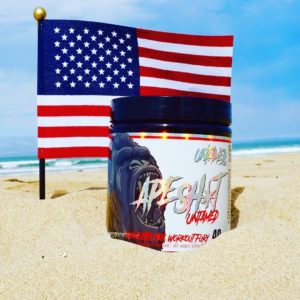 Well, someone was going to eventually make a pre workout named Ape Sh*t, and we’re just glad the product is an incredibly solid one. Too often when a pre workout uses a catchy name or phrase it turns out to be utter crap — that’s not the case with this one.

The profile, taste, and most importantly, effectiveness is top notch and places Ape Sh*t in the top tier of pre workouts available on the market.

If you’re a Primeval Labs fan, this morphed over time to the brand’s main pre workout supplements, as Mega Pre Black and Red were both discontinued. So Ape Sh*t it is!