In an industry that often grows stagnant, it takes brave, trailblazing leadership to change things up, to make a statement. Every once in awhile, someone realizes new possibilities, and injects some major life into the scene, bringing other industries along with it.

Get ready for another rock star release…

Since bursting onto the scene in early 2016, Ghost Lifestyle has redefined what it means to be a supplement company. Marketing themselves as a “lifestyle” brand, Ghost has evolved from a unique brand with awesome labels into an expansive, world-wide operation that lets you closely follow what’s happening behind the scenes on YouTube and Instagram!

As they’ve grown though, they haven’t lost sight of the one thing that has differentiated them from the beginning – innovation. Ghost pioneered the still-growing trend of collaborating with social media influencers, giving them the power to enhance their own formulations/flavors of products. Ghost has also changed the flavoring game, partnering with major brands from Sour Warheads (included here today) to Sonic Cherry Limeade to Sour Patch Kids and Swedish Fish to Welch’s Grape Juice! 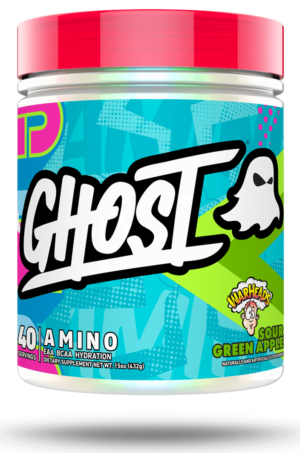 Ghost Amino has been upgraded, and despite some monster EAA doses, it’s still good enough to get the stamping of the official Sour Warheads flavor!

Ghost Amino: The EAA that Came Before the BCAAs

But before all of that, they also innovated on formulations — refusing to release a BCAA before they had a full-spectrum essential amino acid supplement, one of the first on the market with efficacious EAA dosing!

That was Ghost Amino. And after a few years, it was due for an upgrade.

But simply being one of the firsts to put out an EAA-heavy amino acid supplement is no longer enough. In typical Ghost fashion, they’re back with some upgrades: GhostⓇ Amino V2! You’re going to have to keep reading to find out more, but here’s a hint: yeah, we’re fans of this one!

Below, we dive into what makes Amino V2 so special, especially compared to its competition, as well as its predecessor, GhostⓇ Amino. Before we get into that, though, be sure to subscribe to PricePlow for our GhostLifestyle.com coupon code (PRICEPLOW) and news, reviews, and interviews!

Ghost packs quite a punch with V2 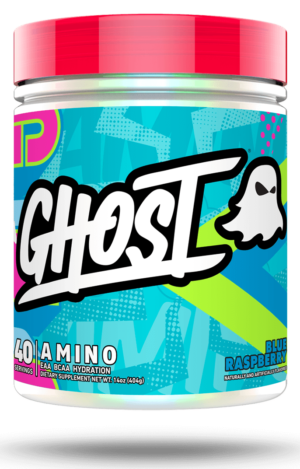 Ghost Amino v2 launched in Blue Raspberry, Warheads Sour Green Apple, and Mango flavors… but check the listings above and below as things may get updated!

While Ghost hits us with new products and flavors at breakneck pace, V2 is definitely one of the bigger stories in 2019. Amino V2 combines three factors – essential amino acids (EAAs), a hydration matrix, and an absorption-boosting ingredient.

Each comes in heavy doses, with either a 1-scoop serving size for the light stuff or a full 2-scoop serving if you really want to get it on. As we typically see with Ghost, there’s a fully disclosed label, so you know exactly how much of each active ingredient you’re really getting. But, that’s not all they’ve managed to do with this one!

Odds are you or someone you know follows some sort of diet regimen, as the popularity of vegan or gluten-free diets (through choice or necessity) continues to grow these days. Finding foods and supplements that satisfy the criteria given these dietary restrictions can sometimes be quite difficult – especially when it comes to those amino acids which can definitely come from “animal products” to put it nicely.

Ghost is here to help ease that burden! In Amino V2, they’re using vegan-sourced amino acids, leaving the animal by-product derived aminos on the cutting room floor.[1] They’re also certified gluten-free and soy-free, making them usable for virtually anyone interested in an EAA product, especially those with soy allergies (who wants soy anyway?).

The label – everything you’ll need!

Despite the weight of each serving varying by a couple tenths of a gram across flavors, each 1-scoop or 2-scoop serving packs the same amount of active ingredient. We’re going to break down exactly what is in each 2-scoop serving, matrix by matrix!

In case this hasn’t been made clear yet – Ghost knows how to flavor their products! Honestly, as long as you pick a flavor that suits you, we have no doubt that you’ll love it. Here’s what’s currently available, at prices using our PricePlow coupons!

If you want a bit more assurance on how great this stuff is before you buy it yourself, check out any other flavor reviews below:

Believe it or not, Ghost seemed to change their approach completely with Amino V2. The new, updated version differs significantly from its predecessor.[31] As far as which one is better for you, well, that depends on what your goals are! Here’s are some key differences: 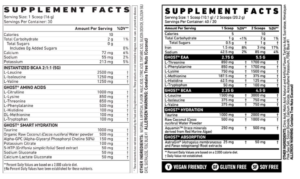 While both formulas are fantastic, we like the improvedhow you plan on using your amino supplement affects which one is best suited for you.What would we recommend? If you plan on using your supplement strictly as an intra-workout, Amino may be your best bet. If you want a more versatile supplement to use anytime, anywhere, go with Amino V2. If you happen to be vegan or gluten-free, your decision is pretty easy – V2 it is! 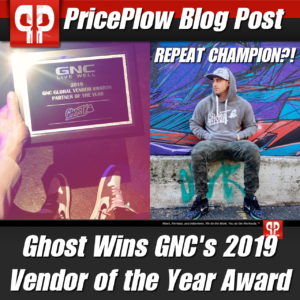 Don’t miss our article on Ghost Winning the 2019 GNC Vendor of the Year Award! There’s a reason why GNC loves working with these guys!

Ghost was one of the first companies within the industry to see the potential in a properly-dosed, full-spectrum essential amino acids formula. BCAA powders had been on the market for years, and virtually every company had their own version of one. Ghost decided to buck the trend, and opened up a market for EAAs. In GhostⓇ Amino, they set an initial bar for what an amino acid supplement could be.

But with Amino V2, Ghost has built an even higher standard. They’ve upgraded their original EAA with a heavier dose of aminos and a bit of hydration, all while making it completely vegan-friendly! This one not only packs more muscle-building EAAs alongside ingredients that help maintain endurance, but also maintains the typically incredible flavor that we’ve grown accustomed to with these guys. At the end of the day, Amino V2 is a welcomed upgrade – it’s more effective and more flexible than other EAAs, and it’s something you definitely want to get your hands on!