TRUWILD Motion: A Pre-Workout That Fuels Your Outdoor Adventures

TRUWILD was founded in 2017 by two guys — Zac and Nathan — who found their passion for pursuing wild outdoor adventures and creating products that would fuel their everyday activities. The idea for TRUWILD came about when Zac and Nathan discovered that there were few high-quality supplements formulated specifically for the outdoor athlete.

After the guys tested several high-stimulant pre-workouts for themselves, they just felt fatigued, dehydrated, and were unable to perform at their peak. So they set out on a mission to formulate supplements that would not only be suitable for their activities but also help other outdoor athletes maximize their full potential.

“At TRUWILD, our goal is to help outdoor athletes maximize their passion. Our products have the perfect combination to provide energy, endurance, rehydration, gut health, immune support, and recovery needed to challenge the outdoors and turn it into a thrilling playground. Stay wild for life!”

TRUWILD prides itself on formulating effective nutritional supplements that are supported by science and made with premium all-natural ingredients. Some of TRUWILD’s ingredients were discovered by Zac and Nathan while engaging in outdoor adventures around the world, in places like Peru, Patagonia, and Tanzania. It’s obvious that the partners live and breathe what TRUWIlD stands for. They make sure their supplements actually deliver results by putting them to the test in the field, whether that’s hiking a mountain, surfing a wave, or cycling the streets. 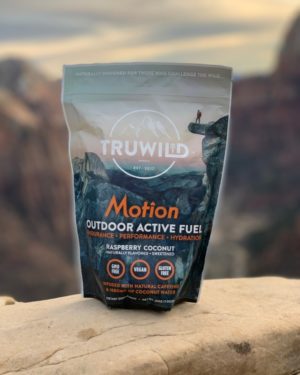 A pre-workout formulated for the outdoor athlete.

TRUWILD offers sports nutrition products that either help you recover, stay hydrated, or perform, such as Hydrate, Baselayer, and Wild Greens. One of TRUWILD’s best selling products is Motion, a plant-based pre-workout that’s non-GMO, gluten-free, vegan-friendly, and naturally sweetened and flavored.

Motion was formulated to boost endurance, performance, hydration, and help athletes stay outdoors longer. It uses three sources of natural caffeine to quickly boost energy levels and keep them elevated for hours. Furthermore, Motion has five trademarked ingredients, a comprehensive electrolyte blend, and more. After taking Motion, you should be able to push past your boundaries and conquer the great outdoors.

Keep reading for more information about Motion and sign up for TRUWILD news and deal alerts so you can get notifications when new products, flavors, and sales are available!

For this ingredient analysis, we’re going to do the same! However, if you look closely at the supplement facts panel, you’ll notice that some ingredients are part of a proprietary blend. This means that you don’t know the exact dosages of every ingredient. Fortunately, Zac sent us the fully-disclosed label to share with our readers, thus we’ll be listing the dosages for each ingredient included in Motion!

Here’s what one serving (11 grams) of Motion contains: 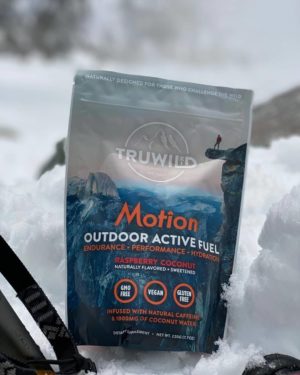 Push past your boundaries with Motion.

In addition to the coconut water, which naturally contains electrolytes and promotes hydration, TRUWILD uses a combination of sodium chloride, potassium chloride, and Himalayan pink salt to ensure you stay hydrated. Both sodium and potassium are essential minerals for carrying out muscular contractions and nerve impulses.

More often than not, pre-workouts have additional sodium but don’t contain potassium, which isn’t ideal because an imbalance in sodium and potassium levels can cause muscle cramping and inhibit performance. Thus, TRUWILD uses a 1:1 ratio of sodium to potassium.

Motion is one of the few pre-workouts on the market that contains Himalayan pink salt. Not only does it contain a good amount of sodium, but it also has other important trace minerals, such as potassium and magnesium. Moreover, Himalayan pink salt may enhance digestion by stimulating the release of hydrochloric acid in the gastrointestinal tract.

Motion is naturally flavored and sweetened with a combination of stevia leaf extract and monk fruit extract. So for those who prefer products with natural sweeteners over artificial versions, Motion is a great option. Motion comes in light and refreshing flavors that are inspired by the outdoors, such as coconut raspberry, kiwi-melon, and pineapple mango.

Here’s an updated list of all available flavors for TRUWILD Motion:

Fuel Your Wildest Adventures with TRUWILD

If you’re an outdoor enthusiast who has a hard time finding a natural sports nutrition product to fuel your adventures, look no further than TRUWILD. Motion is a well-formulated pre-workout that has everything you need to stay outdoors for longer and perform at your peak. Based on the formula, we would argue that Motion is built more for the endurance outdoor athlete who needs an extra kick to fuel his or her intense and prolonged training sessions.

“TRUWILD is about maximizing your true potential, using natural whole-food ingredients from the wild, while appreciating the outdoors and turning it into our playground.”

PricePlow is honored that TRUWILD allowed us to fully disclose Motion’s supplement facts panel and educate our readers on what makes this pre-workout and the brand so different from the rest of the sports nutrition industry. The majority of our content is mainly focused on supplements that boost performance in a gym setting. So it’s nice to highlight a different type of athlete, one who has needs, unlike the average gym bro or gal.

It’s very apparent that Motion is just one piece of what TRUWILD has to offer, so be sure to head over to Truwild.com to see their full inventory of products! Subscribe below for more TRUWILD news, reviews, interviews, and deals from PricePlow.