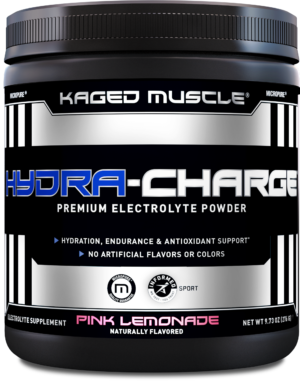 Kaged Muscle Hydra-Charge Pink Lemonade is out, and it’s fantastic! But keep reading to learn the true origin of pink lemonade!

Whether you use it as a standalone hydration supplement, or a low-artificial-sweetener flavoring system for your unflavored supplements, the feedback is always the same: Hydra-Charge rules!

But now it rules even more, because Kris Gethin and the team behind Kaged Muscle have released their incredibly popular hydration supplement in the new Pink Lemonade flavor!

As discussed in our original Hydra-Charge blog post (which will have the most details on the ingredients), this wasn’t even supposed to be a standalone supplement! It was originally meant to be used as the flavoring system for Kaged Muscle’s unflavored series of stackable supplements.

As Adam Kossoff of Kaged Muscle told us late in 2019,

“HYDRA-CHARGE started as the flavoring system for the mix-your-own stack (and it still makes a great flavor agent for any “unflavored” supplement on the market) – but it’s become an essential part of a lot of our customer’s stacks.”

Below we briefly discuss this flavor system, show our tasting review, and discuss its benefits, both. But before we do that, sign up for PricePlow’s Kaged Muscle’s news alerts and check out our PRICEPLOW coupon-powered deals:

What is Pink Lemonade anyway? Get ready for a story…

The story behind “pink lemonade” is actually quite absurd. Pink lemons do exist, but this “flavor” didn’t come from them (and those lemons have clear juice like regular lemons anyway). So where is it from?

According to the Smithsonian Magazine,[1] there are two theories in play, both from the wild world of circuses in the 1800s. The following research was dug up by Josh Chetwynd, who wrote How the Hot Dog Got its Bun: Accidental Discoveries And Unexpected Inspirations That Shape What We Eat And Drink[2] and Harvey W. Root, who wrote The Ways Of The Circus: Being The Memories And Adventures Of George Conklin, Tamer Of Lions (1921):[3]

It’s unclear which story is really true, but pink lemonade has taken on a life of its own, and we can guarantee you that Kaged Muscle’s Pink Lemonade flavor system does not come from Kris Gethin’s dirty pink tights!!

With that said, let’s get down to business: Hydra-Charge.

“Hydrate and defend” with Hydra-Charge 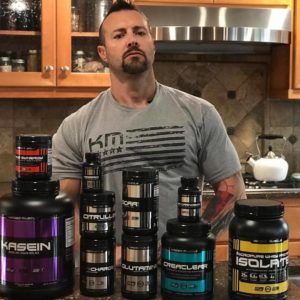 The incredible Kris Gethin showing how you flavor the solo ingredients from KM: with Hydra-Charge!

Again, you can read the details on our main Kaged Muscle Hydra-Charge blog post, but the long story short is that this supplement is built with electrolytes and micronutrients. When used alone, it’s typically a way to get some electrolytes, hydration, and to satisfy the sweet tooth. In addition, it provides some defense against free radicals with SPECTRA, an antioxidant blend of high-ORAC fruits, vegetables, and other herbal extracts.

As mentioned above, Hydra-Charge was originally meant to be stacked with KM’s unflavored powders! Some examples are Kaged Muscle’s Citrulline (for nitric oxide pumps), Fermented BCAAs and/or KM’s Glutamine for anti-catabolic effects when training, or CreaClear creatine for some extra strength, power, and size.

But truth be told – most consumers (ourselves included) just love to sip on it solo!

Below is a brief explanation of what you’ll find in Hydra-Charge: 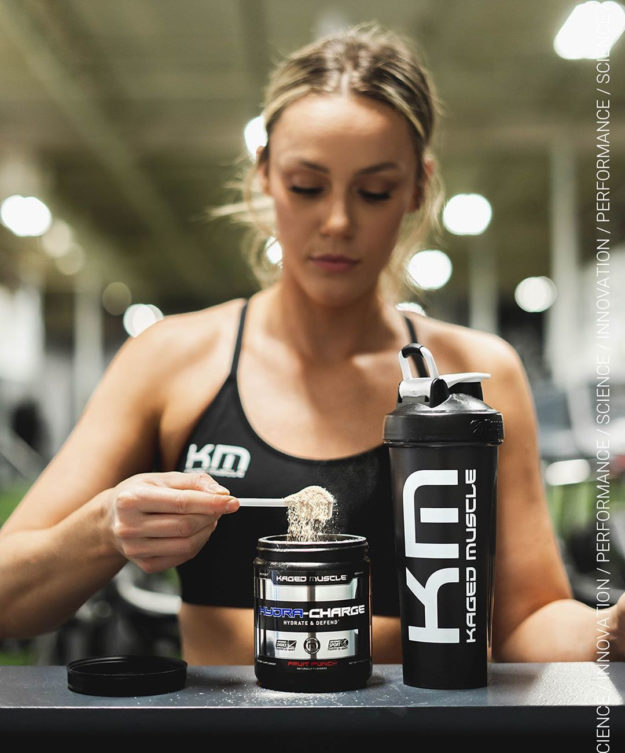 Hydration system or flavor system? Kaged Muscle’s Tawna Eubanks-McCoy knows the truth: it’s both! Have you tried it yet?

As the driving force of Kaged Muscle, Kris Gethin follows a mostly-holistic lifestyle, and like all other KM supplements, Hydra-charge has no artificial colors or flavors. It’s colored with one of the best beet root extracts on the market. There’s mostly stevia sweetening, but a bit of sucralose (less than other supplements) to beat the stevia aftertaste down. The system works and it works well.

To learn more about this, read our article titled Above and Beyond: How the Kaged Muscle Flavoring System Works, which discusses how Brian Rand, chief formulator for Kaged Muscle, made it happen. 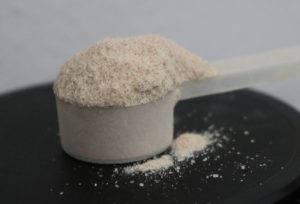 If you’re a fan of Pink Lemonade flavors, you will love Kaged Muscle’s take on it. But if you love KM’s fruit punch as much as we do, you know that it’s nearly impossible to beat that flavor – and that’s not saying anything bad about this new flavor here! 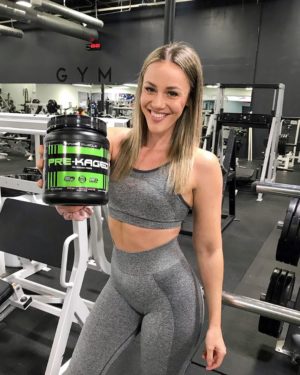 Not everyone is Branch Warren sized and can chug 20oz like it’s nothing. Tawna Eubanks is stoked for a full dosing of Pre-Kaged in just 12oz!

Fans of Kris Gethin and Team KM will note that this isn’t their first time using a pink lemonade flavor system – in October of 2019, they launched the Pink Lemonade flavor of Pre-Kaged. On top of being a fantastic flavor, the big news is that it required far less water than other flavors of Pre-Kaged, which many customers had asked for.

With a successful launch there, it was time to take this fantastic flavor to Hydra-Charge.

Conclusion: Hydra-Charge rules that much more

Now that you know the ‘disputable’ origins of Pink Lemonade, and what makes Hydra-Charge so special, the only question left is which flavor to get. This supplement is a life-saver (see the additional videos below), and we call on it for help any time there’s cramps, stomach sickness, or anything requiring additional hydration.

Every supplement cabinet should have at least one tub of Hydra-Charge, and now you can add the infamous pink lemonade flavor to your menu of options!