It wasn’t too long ago that Ryse Supps burst onto the scene, but in such a short period of time, they really made a name for themselves. But it’s not a surprise that they’ve grown into being such an influential company, because this brand does everything a bit different. Just look at their packaging, labels, flavors, and most importantly, the formulas.

Ryse takes a lot of pride in producing products that will help you rise to greatness. So don’t expect to see ineffective ingredients, subclinical dosages, or proprietary blends. Ryse is all about transparency, quality, and results — it’s really that simple. And if you’ve tried any of their products, you know exactly what we’re talking about, because they are the perfect example of what Ryse values. 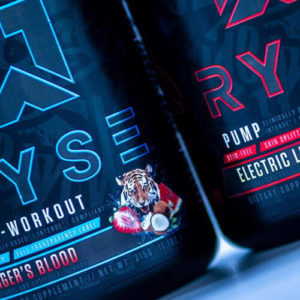 Over the years, Ryse Supps has put out some very popular products, such as Loaded Protein, VitaFocus, and the Ryse Supps Pre Workout. Although their supplements all do extremely well, there were enough customers that wanted even more. Ryse noticed there weren’t many well-formulated products built towards the more ‘intense’ lifter. This makes sense, because that’s a fairly niche population to cater towards. The majority of brands are trying to go more mainstream to reach a wider audience, leaving a large opportunity to the “niche of intensity” that Ryse feasts upon.

The consumers who would rather hit the barbell than the barstool are the ones who will be your most loyal customer, so long as the brand can deliver the type of products they’re looking for. So not only did Ryse want to create more advanced supplements for themselves to use, they wanted to offer them to a group of people who are often left behind.

Not to mention, Ryse works with some highly elite athletes, who need everything they can get to out-train and beat the competition. It was time for the next level of Ryse. It was time for Project Blackout. A new advanced, stronger series with a spin on the darker side.

Blackout Pre: Formulated For The Elite 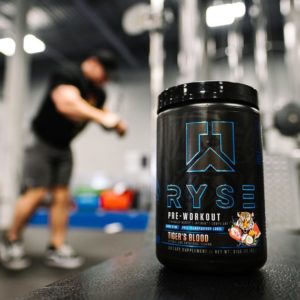 Ryse to greatness with Blackout Pre!

The first two supplements Ryse released under Project Blackout were Blackout Pre, a high stim advanced pre workout formula, and Blackout Pump, a non-stim pump formula. This allows consumers to have more options, because not every gym session requires you to be stimmed out of your mind, but some days you need an extra kick! The Blackout Pump and Pre can be stacked together or taken separately, it’s your choice, but no matter what they will deliver results guaranteed.

Project Blackout has been a major hit for Ryse and PricePlow keeps hearing how great the pre workout is, so it’s time for us to see what all the hype is about!

In this post, we analyze the formula, explain the benefits and differences between their other pre workout, and highlight how to use it in order to get the best results. Project Blackout is a new beginning for Ryse, so subscribe to our Ryse Supps news alerts for more product launches, deals, giveaways, and reviews!

Keep in mind that Ryse wanted to create a more advanced, higher stim product without using anything borderline grey market. So don’t expect to see any exotic stimulants or ingredients that will probably be banned in a few years. Ryse is dedicated to giving you the most safe and effective supplements they can produce, therefore you can expect to see several patented or trademarked ingredients, backed by plenty of research.

This is a high stim product that contains nearly 410mg of caffeine, so get ready for long lasting energy that will carry you through the most grueling training sessions.

Now that we’ve warned you, let’s see what one serving (12.6g) of Project Blackout Pre has in store!

Beyond their extremely effective formulas, Ryse is known for even better flavors! The reviews speak for themselves, people love the twist they take on their flavor profiles. For example, the Loaded Protein comes in Cinnamon Toast and Fruity Crunch, and Ryse fans go nuts for them. So, like we mentioned at the very beginning, Ryse always does things a bit differently, so don’t expect to see the same old boring flavors you’re used to!

Here is an updated list of all the available flavors of Ryse Supps Blackout Pre-Workout:

Ryse wanted to make a clear distinction between their original line of products and this new “advanced” version. With that in mind, Project Blackout was born. It was the perfect differentiation, since Ryse is known for white bottles with gold accents, and this new line would be completely “blacked out”, allowing you to clearly tell what’s what. Although they changed the look, what really separates Project Blackout from the other products are the formulas, as you saw above.

Blackout Pre Workout Is Not For The Faint of Heart 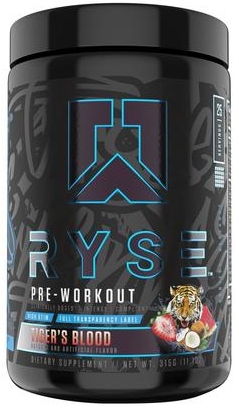 Project Blackout was designed to be a line of products suited for more advanced competitors, athletes, and gym goers. With Blackout Pre they wanted to create a formula that delivered the best energy, focus, and pump around. With a double-nitrate, double-caffeine, high-VitaCholine formula, we would say they definitely achieved that!

But if you’re looking for a pre workout that has a bit lower stim, but still delivers great results, check out Ryse Supps Pre-Workout that features a white bottle and label design. It still has a solid formula but isn’t so high stim.

Overall, we think Ryse did a great job with Project Blackout Pre and who knows what else may be coming in the future for this new line. No matter what, Ryse is always trying to improve, expand their reach, and offer products that actually do what they advertise. PricePlow always likes to see a company using patented ingredients, transparent labels, and clinical dosages, because that’s the perfect storm for an effective supplement.

Ryse has so much planned for the future, and we can’t wait to share it all with you, so subscribe down below to stay up to date!