Modern BCAA is BACK: The Formula, The Flavors, The LEGACY

There are times when we look back at foods and drinks from past decades, fondly remembering them as better than they really were (1980s microwave dinners, anyone?). And then there are times when the market has shifted away from a classic that we loved… yet didn’t realize how much we loved it until it was gone.

Today, we are excited to bring you the latter of those two — a classic that has been reborn, exactly as we remembered it. And it turns out to be just what we wanted.

It’s back, it’s legit, and it’s… the same as ever! Welcome back Modern BCAA+!

The re-birth of a classic: Modern BCAA+ is back

We’re talking about none other than Modern BCAA, the hit amino acid supplement with serious cult following a launched by none other than USPLabs back in 2010. Later improved with electrolytes and renamed Modern BCAA+, the product was one of the first to teach us about anabolic mTOR signaling from high doses of leucine – something we hear about all the time nowadays.

Modern BCAA+ brought a light flavor with zero artificial color, something that brands simply weren’t doing at the time. Those flavors kept customers coming back for more, as it is the ultimate in chuggable intra workout supplements. 20oz of water per serving? Perfect.

To say this product was ahead of its time would be a total understatement.

Unfortunately, it all came to an for Modern BCAA (and their “cult following”) when USPLabs shut their doors for good. Until, that is… the 2019 Mr. Olympia:

Arisen from the ashes

While walking the expo floor at the 2019 Mr. Olympia, we were stunned to walk by a booth and see “Modern BCAA” plastered all over, with bright lights. Our first thought was that this was some crazy case of IP theft, but we quickly learned from Chad Crosby of Modern Sports Nutrition that the exact opposite was actually true – the supplement was 100% legit and back in action – exactly how it was left, just with a different logo:

The rest of the story and a bit about the product are below, but first, check out our Modern BCAA prices and sign up for our Modern Sports Nutrition news alerts, because the band’s back together, and they’re only getting started:

The Band’s Back Together!

When they went from Modern BCAA to Modern BCAA+, they added the electrolyte blend — well ahead of their time compared to other BCAA supplements!

In the video above, Chad explains that the remaining sales and marketing team from USPLabs knew they had a hit with Modern BCAA (and some other formulas banging around in their heads), and they also knew that the supplement was 100% compliant with a 100% loyal following to fit. So they decided to bring it back. 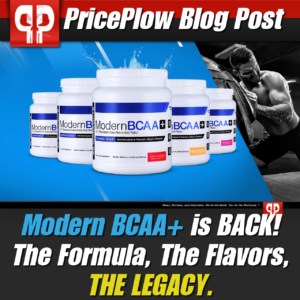 It took some legal assistance, but Modern Sports Nutrition was formed, and gained full and legal ownership of the Modern BCAA trademark[1,2] – just in time for the 2019 Mr. O!

Long story short? The band’s back together – and they’re bringing the legacy with them!

THe only thing left to do was to make sure it is what they say it is: same formula, same flavors, same manufacturer, same bottle, different logo:

Our Modern BCAA Review and Comparison to the USPLabs Classic

It just so happened that we had a ton of older Modern BCAA+ tubs leftover from the USPLabs era. So we put Chad’s word to the test, to see if it was exactly the same (minus the new logo). The verdict: the new Modern BCAA is 100% the same product, flavors, and supplement facts, only far fresher!

So light!! What we had forgotten about…

We had a feeling Chad wasn’t kidding when he said it was the same exact formula. But what we forgot is why the product is so popular – it’s simply light on its feet! After a day of drinking and reviewing all kinds of sucralose-laden drinks, we realized that this is what we wanted all along.

With a full two-scoop serving in 20oz water, Modern BCAA+ affords the ultimate in chuggability and sippability. It’s versatile, it’s enjoyable, and it’s great whether you’re fasted or full.

Unlike the aminos of today

In an era when amino acid supplements are loaded with so many active ingredients (and evermore sweeteners to cover those actives) that they’ve essentially turned thick, this is exactly what we’d been missing lately. Something light and fresh. How we had forgotten!

With a legacy product, you do get a bit of a legacy label – and that includes a proprietary blend – but a big 15g one at that.

Ultimately, you’re left with a deliciously light, leucine-rich amino acid supplement that you can sip on anytime, or chug in between those short breaks during hard training. 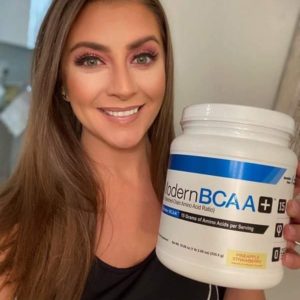 @themariastarr knows where to get that OG pineapple strawberry flavor!

Below is an up-to-date list of flavors available through Modern Sports Nutrition:

As shown in our review above, the flavors we tested against the tubs we still had were identical, only fresher, so if you were a fan of the original, rest assured you’re in good hands.

The band is back together, and we can’t wait to see what’s next!

This is just the start for Modern Sports Nutrition — get ready to see what comes next!

It’s no secret that we were massive fans of USPLabs. They changed the world of supplements, flipping the industry on its head. The pieces were in place for a great team, and we’re glad the major pieces of the team (such as Chad) have pulled back together to return to what they do best: advance the future of diet and sports nutrition.

We’re told that the return of Modern BCAA+ is just the start. Bringing back a legacy product with a huge following is one thing, but now we’re excited for what the future brings.

For that, you can sign up for our Modern Sports Nutrition news alerts on PricePlow to stay tuned in to their next launches. In the meantime, if you’re looking for a light and refreshing BCAA supplement with some quality extras, then Modern BCAA+ is your next sports drink: