Posted on December 7, 2022 by Mike Roberto and Nick Andrews | No Comments

We love Universal Nutrition because their approach to formulating supplements is inspired by old school bodybuilding – the overwhelming majority of ingredients Universal uses are backed by hardcore research, every once in a while they give a wink and a nod to the finest bodybuilding traditions. 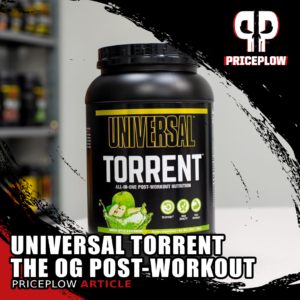 We’re long overdue for giving one of the OG post-workout supplements — Universal Torrent — some much-needed love!

When PricePlow was founded in 2008, one of the main supplements we discussed for post-workout gains was one that still stands tall today – with a formula that seems to have never changed since its inception. It’s time to give some love to the one and only:

When in doubt as to what you should take post-workout, this is a go-to formula you can always rely on – especially if there’s no food around.

Before we talk about this awesome formula, let’s first check the PricePlow news and deals:

In a single 3-heaping-scoop serving of Torrent from Universal Nutrition, you get the following:

Where do those calories come from? Included are the carb and protein blends – but there’s far more than that! 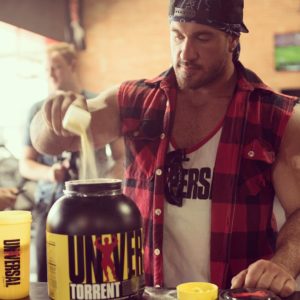 Torrent from Universal Nutrition contains a lot of old school bodybuilding ingredients that have been popular for many years.

We’re not really sure about the use of leucine ethyl ester over standard leucine, and may follow-up more, but generally consider leucine to be a very effective amino acid. Creatine gluconate also has little data, but that’s fine because we’re mostly getting creatine monohydrate and magnesium creatine chelate.

As for everything else in here, we can say with certainty that they’re all awesome ingredients that are great to take post-workout. Torrent is listed at a pretty attractive price point, and is definitely worth it for those who want to slug an extra 300 calories into their diet without chewing.

This formula is another example of Universal’s attachment to what you might call heuristic traditionalism. One of the things that makes the brand unique is their nod to bodybuilding practices discovered through trial-and-error, which still could be valid, even if researchers haven’t gotten around to studying them yet.