Primeval Labs has released a much-improved look at its all-new and extremely exciting Mega Pre “upgrade”. On August 22nd, 2018, one of the industry’s fastest-growing brands released the new label for their upcoming Mega Pre Black. This new black label gives the product a darker vibe, which alludes to a powerful, stimulated enhancement.

What’s different in the new formula? 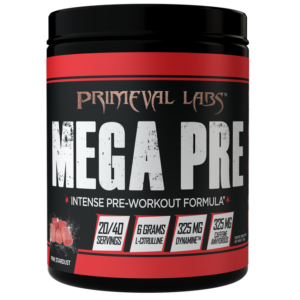 This is the new, “darker” version of Mega Pre. They added tons of stims AND kept the pumps and focus from the old formula. We love the direction Primeval Labs took this product in

It goes without saying that Mega Pre Black brings the stims!! The new supplement features a heavy hitting stimulant complex including 375mg total caffeine and 325mg Dynamine 40% (for 130mg yield)! But that’s definitely not all.

Mega Pre has been a top-rated stimulant-free pre workout supplement that is fully well-rounded with pumps, focus, and performance-enhancers, but many customers still wanted to pair that with energy from stimulants. This was a temporary gap in the Primeval line, since Adrenal Rush V2 was discontinued. The other options came from their Untamed Labs Ape Sh*t offshoot, which was epic in its own right, but a massive foundation was already built in Mega Pre, so why not just crank up its energy?!

Meanwhile, the price is right too – check out PricePlow’s price comparisons and sign up for our Primeval Labs news alerts since they’re always pushing stuff out:

Honestly, I didn’t realize how phenomenal of a product this would be until I really looked at the label (discussed below). But… there’s one flavor that just couldn’t mask the Dynamine. Which one?! 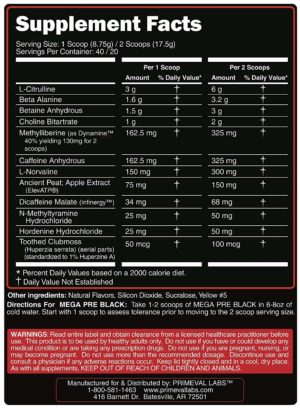 Primeval Labs knocked this monster out of the park! Read about the Mega Pre Black Ingredients in this post

One significant thing you’ll notice is the carryover of several ingredients from the stim-free formula to the Black label. Primeval has kept 6g l-citrulline, 3g betaine, 150mg ElevATP, 300mg l-norvaline, and 100mcg huperzine A from the white to the black label.

Note: All doses are in the two scoop serving size, which would yield 20 servings per container. Truth be told, we love it enough at about 1.5 scoops to make the tub last a month!

The two ingredients that were dropped from Mega Pre are 2g of 65% glycerol and 254mg of Vasodrive-AP. This means a bit less pump, but honestly, we’re taking Mega Pre Black over Mega Pre any day right now — even if you were to throw a couple caffeine pills with that Mega Pre.

Reason being, those bonus stims of Dynamine, hordenine, NMT, and that extra gram of choline are just too good to pass up. 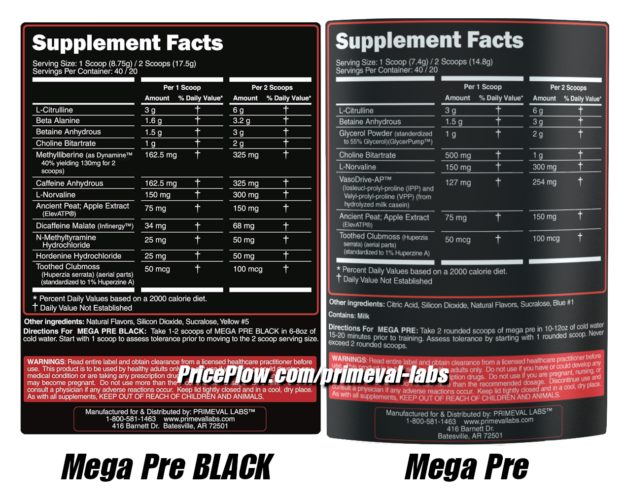 Mega Pre Black vs. Mega Pre. We’ll take the one the left, please!!

The following flavors are currently available:

Primeval Labs knocked this formula out of the park

The full story is that when Mega Pre was originally getting formulated way back when, it was going to be stim-based. Primeval decided to flex (literally) and show that they’re a pump company, and that’s true. But when Adrenal Rush V2 got discontinued, it was time to take some of those underutilized stimulants like NMT and Hordenine and put them into their bombshell pump formula.

This pre-workout was built to hit four main areas which are pumps, focus, energy, and performance; with an open-label and very well-dosed formula, Mega Pre Black seems to do just that.

It took some time to get here, but it was clearly well worth the wait. This is a must-try supplement for the 2018/2019 winter bulking season.

Make sure you sign up for PricePlow alerts for the up to date details on the newest product from Primeval Labs.