The invasion has begun. After years of waiting, Dedicated Nutrition is finally here on the shores of America. Prepare to meet their beachhead attack: Unstoppable. 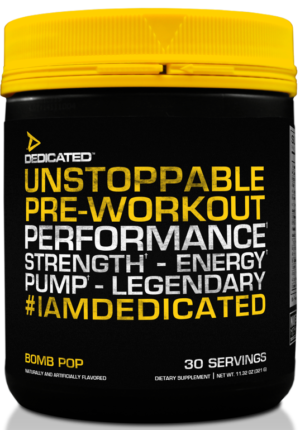 Does this pre workout live up to its name? At 211.5mg caffeine, it’s going to have to bring in the supporting infantry to amp up the workouts!

At long last, Canadian powerhouse Dedicated Nutrition is finally available in the United States! Previously available only internationally, this brand has run circles around the competition around the globe — especially in Europe — but waited until the perfect moment to attack from the north.

Led by superstar athlete Simeon Panda, if Dedicated’s statements are true, Unstoppable may be one of the must-try pre workout supplements of 2018. The demand has always been there — who doesn’t want a pre-workout that will give sleeve-bursting pumps, competitive temperament, increased strength, enhanced focus, and unstoppable energy?!

Dedicated Nutrition is making some bold claims with Unstoppable, stating that the company’s pre-workout is “the ultimate muscle performance product on the planet.” Of course, when Simeon Panda is the face of the company, you can expect some big promises.

Let’s learn why, but first, make sure you check PricePlow’s coupon-powered prices and sign up for Dedicated Nutrition news alerts, because this is only the beginning:

The Unstoppable Ingredients: Dedicated Nutrition Promises to Keep it Advanced and New

Take note, the team is promising new ingredients in Unstoppable that have never been seen before. For many of us, this is a great thing, as we’re always looking for new ways to enhance our workouts. But for others, they’ll want to do some research to see what we’re dealing with here – and we’ve laid it out for you below.

Now let us go into the unknown, with claims of added strength, pump, endurance, focus, drive, and energy “beyond what you thought would even be possible.”

Catch your breath after reading that list and let’s break these ingredients down!

Other stuff on the label

Each serving being a single 10.5g scoop. This supplement has:

The calories here are hardly worth tracking but if you are on a carb-cutting diet, than it’s worth noting the 3g of carbs. The question is where they come from – and we’re thinking it’s a combination of the glycerol alongside the flavor system.

The minerals aren’t really worth noticing, they’re just there from the flavor system’s fillers (calcium silicate and trisodium citrate).

Final Thoughts on The US Version of Unstoppable 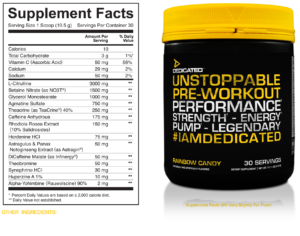 Unstoppable has made it to the US. Will it work with today’s American tastes?

Unstoppable is a low-caffeine alternative to all of the insanely high-caffeinated pre workouts here. Dedicated Nutrition goes through a serious effort to keep the caffeine crash low, with a plethora of other stimulants and adaptogens around it.

What you’re left with is a concentrated pre workout supplement that should provide some feel good performance, a few fat burning properties, increased mood and feeling of wellness, added energy and stamina, and some unsuspecting pumps!

The ultimate review comes down to a single ingredient, right there at the end — alpha yohimbine. If 1.8mg of the powerful ingredient is too much for you, then this is going to throw the equation out of whack. But if you’re looking for a way to keep caffeine low yet enjoy all of the “other” stimulants, than we have a solid pre workout for you here.

We can’t say that we have ever seen a pre-workout quite like this. Gone are the days of “Ampheta-Tea” ingredients, but we’re definitely excited that this product is finally available in the U.S. and you will need to check our YouTube channel for our review!