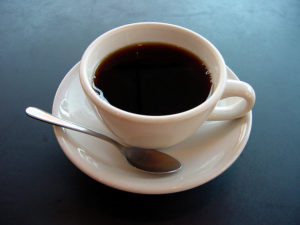 A new study out of the UK finds that coffee outperforms pure caffeine (and placebo) in the gym!

Before energy drinks, caffeine pills, or pre workouts, Americans got their energy kick from their daily cup (or carafe) of coffee. We’re not talking about the fancy triple-mocha double-foam latte you pay $6 for at the mega-chain coffee purveyors. We’re talking about the deep, dark, delicious cup of fresh brewed coffee from your local diner or home French Press.

Yes, coffee is delicious, and when not gunked up with tons of cream, sugar, and foam, it is most certainly an energizing and healthy way to start the day.

A new study finds that coffee outperforms pure caffeine (and placebo) in the gym!

Most people experienced with dietary supplements know that caffeine is not only great as an energy supplement, but it’s also a fantastic performance enhancer. Numerous studies have shown caffeine to be particularly effective for improving power, strength, endurance, and delaying fatigue.[1,2,3,4] Hence, the reason it’s included in so many pre workout formulas.

Here’s is the timeline for the subjects in relation to coffee timing and exercise performance.[5]

Researchers from the Department of Applied Sciences and the Faculty of Health and Life Sciences of the Coventry University in the UK set out to determine if there was any difference between pure caffeine (caffeine anhydrous) and coffee that contained an equivalent amount of caffeine.[5]

Now, one would think that the two should perform the same. But is there something more to coffee than just the caffeine content?

Nine resistance trained males were recruited for the trial and each subject attended six training sessions. The first of these was to familiarize the test group with the equipment and establish their respective 1-RM in both squat and bench press to serve as a baseline for the remainder of the experiment.

Both the coffee and decaf coffee group saw significant increases in performance compared to the caffeine and placebo group.[5]

For those of you not too great with math, here are the dosages of caffeine the respective groups consumed:

All coffee trials were dissolved in 600mL of water, while the caffeine anhydrous and placebo groups received two opaque gelatine capsules.

Turns out there’s quite a bit of difference between ingesting coffee or pure caffeine pre workout. Both the coffee and decaf + caffeine group lifted significantly more weight during the squat sessions compared the anhydrous group as well as the placebo group.

What about the bench press though? That’s what people always are more interested in anyway at the gym… 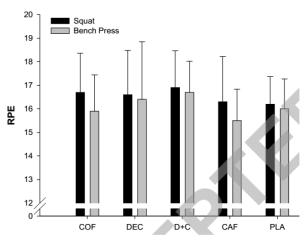 Not surprisingly, coffee (as well as decaf) also outperformed pure caffeine when it came to rate of perceived exertion (RPE) during the trial.[5]

Turns out coffee did not surpass caffeine head-to-head in this exercise. But this isn’t all that surprising as two similarly performed trials[6,7] found no significant performance benefits from caffeine supplementation on bench press performance in resistance-trained subjects.

One hypothesis is that caffeine’s effects on upper body exercises are less noticeable and not as impactful as it is for lower body exercises like the squat,[8] which are much more physically demanding of the body, but we can’t be sure.

Want to test this out for yourself? Here’s how to do it!

First, go buy a bottle of instant coffee from the store. Nescafe’ was used in the trial, but the generic brand should suit your needs all the same.

Then, multiply your weight in Kilograms x 0.15 to get the amount of Instant Coffee. Multiply weight in Kilos x 5.1 to get study amount of Caffeine used during the trial.

We all know how great and wonderful caffeine is, and sure it does certainly enhance performance in the weight room and on the field. However, it’s all about being the best, and the best way to get your caffeine fix isn’t from anhydrous but from coffee along with all of the other antioxidants and polyphenols that come with it.

Next time you’re headed to the weight room, try a decidedly stronger cup of coffee with a stim free pre workout instead of your normal stimmed pre and see if there’s a noticeable difference for yourself!