Launched by Matt Jansen and Dr. Domenic Iacovone — two highly-respected businessmen in the health and fitness industry — Revive MD has blown the doors down on the sports nutrition industry with health-based formulations that go well beyond what anyone has done anywhere in the industry.

While some brands were attempting to fit formulas into as few capsules as possible, Revive MD did something completely different: target specific health issues and organ systems, and dose the ingredients as high as needed. Even if it takes twelve capsules per day to make that happen.

That’s the story with Revive MD Kidney, a monstrously-dosed renal support supplement that is meant to be taken three times daily — with four capsules each time! 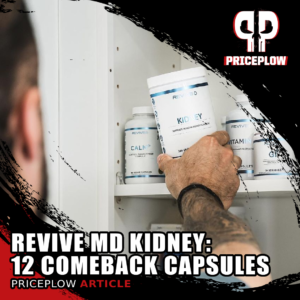 Kidney Support: When you want to get it done right, you choose Revive MD.

When we first started covering Revive MD’s supplements, we wrote an article about their sponsored athlete, Chris Bumstead, the current Classic Physique Mr. Olympia. It was titled “The Comeback Kid”, since it detailed Chris’ health and fitness journey that included some setbacks prior to his rightful claim to the throne (which he then defended this year in 2021).

One of the main supplements that brought Chris into the Revive MD family was Kidney. The journey went from sponsorship to partnership, as Chris is now a partner at Raw Nutrition, Revive MD’s sibling brand.

Get ready to meet the “gut-kidney axis”

This is the kind of formula that makes that much of a difference, and we’re proud to announce that Kidney is back in stock. It’s all covered below, and this article comes with some new research that’s worth understanding — including discussion of the “gut-kidney axis”.

To show you how serious Revive MD is, they included one ingredient with 4 grams, and another with 3 grams – so you know you’re going to get some ridiculously efficacious dosing. We even posit that it’ll greatly improve workouts.

Let’s dig in, but first show the PricePlow-powered prices and get to our explainer video when it’s live:

In twelve capsules taken daily (spaced out in three dosings throughout the day), you’ll get the following incredibly-dosed Kidney formula:

As discussed above, this is a massive supplement, with twelve total capsules per day. This is no problem for those who are really looking for profound effects, and the strategy is to take four capsules three times daily. 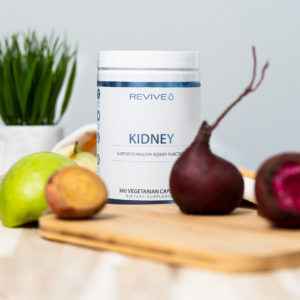 It bears mentioning that many of the ingredients here operate by increasing bloodflow and reducing blood pressure. As discussed above, hypertension is highly correlated with renal disease.[18] So alongside therapy, consider dietary approaches that reduce blood pressure naturally, such as doctor-assisted carbohydrate-restricted diets, which have been shown to not only improve hypertension and glycemia but also renal function.[48-50]

Before Revive MD came to the sports supplement scene, very few supplement companies had the guts to make a twelve capsule supplement. However, that’s what it takes to get serious doses of ingredients that combat serious conditions, and Dr. Domenic Iacovone and Matt Jansen both knew that this was what their athletes needed.

One of those athletes was Chris Bumstead, whose Comeback Kid story led to multiple world championships and his eventual joining of the team as a partner at Raw Nutrition. It all started with this seemingly niche supplement – and now an entire world of possibilities has been opened up for the team.

Revive MD shows us what’s possible when you dare to dream big – and sometimes by big, we mean twelve capsules in a day. Each one of them well worth it for those this supplement was made for.