Apex predator: Also known as an alpha predator, is a predator at the top of a food chain, without natural predators of its own.

Primeval Labs is a supplement brand that tells you they are right there in their name. The brand that’s full of aggressively-marketed (yet legally compliant) supplements reaches a spirit that’s simply on a more… primeval level.

They’ve taken their “Untamed” Ape Sh*t pre-workout supplement and turned it into a pre workout platform, giving you options such as the ready-to-drink Ape Sh*t RTD and the fat-loss amplifying Ape Sh*t Cutz.

Now, it’s time to get a bit more… predatory. 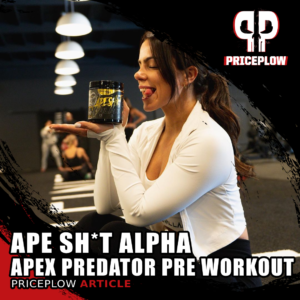 Primeval Labs Ape Sh*t Alpha is a pre-workout supplement built to bring your A-game to the gym — and when we say A-game, we mean Alpha-game. For those looking for an extra edge, this pre-workout has a bit more thunder than the rest.

Ape Sh*t Alpha has a few key ingredients in a full two-scoop serving:

And of course, you’ll still find a full dosage of beta alanine and solid smack of choline to keep you focused on your hunt for greatness.

It’s all covered below, it all stacks great with VasoGorge, and it’s available through PricePlow’s affiliated stores:

Below is what you’ll get in two scoops: 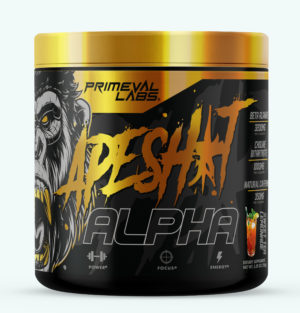 What flavor do you get? Primeval Labs usually knocks them all out of the park, so we’re honestly not very concerned

As you know from EAA Max (a supplement you should certainly consider stacking this with), Primeval Labs are the flavor kings. Here’s what’s on the menu for Ape Sh*t Alpha:

Did someone say stacking?

While we’re on the subject of using EAA Max, it’s worth noting that this was designed to stack incredibly well with VasoGorge, which includes a full clinical dose of nitric oxide boosting Nitrosigine.

Be the Apex Predator 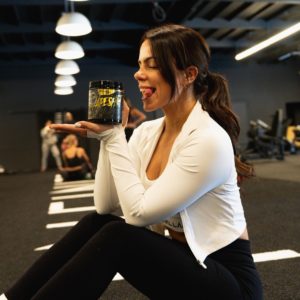 Ape Sh*t Alpha is a more aggressive pre-workout supplement than your standard pre. The caffeine dosage is obviously higher, so consider that when scooping, but also consider the yohimbe inside that’s going to net you nearly 3 milligrams of yohimbine – no tiny dose.

It may not seem like a big deal, but having zinc, vitamin D, and boron added to a pre-workout is a big deal. There are simply too many men not getting enough of these three critical nutrients, and this pre was launched just before winter, so the timing couldn’t be better.

The Ape Sh*t platform is rounding out incredibly well… and looking at what we’ve seen so far, we’re guessing that there’s one thing still missing. Perhaps you should sign up for our Primeval Labs news alerts to stay tuned for those future launches: