Built by Science. Driven by Obsession. Elevated Through Innovation.

Beyond Raw is a well-respected sports nutrition brand that’s exclusively sold at GNC (online and in stores). The company was actually started by a former GNC employee who wanted to create a brand that was based on science, driven by obsession and elevated through innovation. Thus, the owner set out on a mission to formulate several supplements that featured proven ingredients dosed according to the latest research. Beyond Raw has made a commitment to their consumers that “If it’s on our labels, then it’s in our bottles.”

Last time Beyond RAW was featured on the PricePlow Blog, we covered Beyond Raw Pump, a stimulant-free pre-workout that delivered incredible pumps and performance! Considering that Beyond Raw Pump has the clinically-proven dose of Nitrosigine, one of PricePlow’s favorite nitric oxide boosters, it’s no surprise that this supplement works so well. Although Beyond Raw Pump is an incredible pre-workout, it’s not the company’s best-seller…

Beyond Raw Teams Up with Nutrition21 and Jolly Rancher!

As soon as Beyond Raw burst onto the sports nutrition industry, Beyond Raw LIT quickly became GNC’s best selling pre-workout. One of the things we appreciate most about Beyond Raw LIT is that it uses a fully transparent label, meaning that you know the exact dosages of each ingredient. Furthermore, they partnered with Nutrition21, one of the top ingredient suppliers in the supplement industry, to use the clinically-studied dose of Nitrosigine! 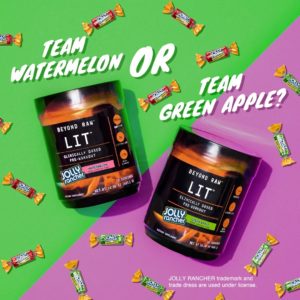 Nitrosigine is a patented ingredient. Several studies support their performance and cognitive-boosting benefits. It’s also currently one of the hottest ingredients in the sports nutrition industry and is used by multiple reputable companies.

If you haven’t tried Beyond Raw LIT, we highly recommend picking up the licensed flavors because they’re just as good as they sound. Keep reading to find out more about Beyond Raw LIT and sign up for Beyond Raw news and deal alerts below!

On the other hand, ingredients such as beta-alanine, caffeine, and NeuroFactor heighten energy and mental focus. Overall, Beyond Raw LIT is a comprehensive pre-workout that increases several aspects of performance.

Beyond Raw recommends mixing one serving with eight ounces of cold water and consuming 20 to 30 minutes prior to your training session. If you need an extra energy boost on non-training days, you can also consume one serving.

Here’s what one serving (~14 grams) of Beyond Raw LIT delivers:

By teaming up with Jolly Rancher, Beyond Raw has brought some intense flavors to the Beyond Raw LIT flavor menu, and we hope that more licensed flavors are on the way. Beyond Raw is one of the few sports nutrition brands to use officially licensed flavors. So you know if a brand like Jolly Rancher is going to place their logo on a pre-workout, they must believe in the product.

Here’s an updated list of all Beyond Raw LIT flavor variations: 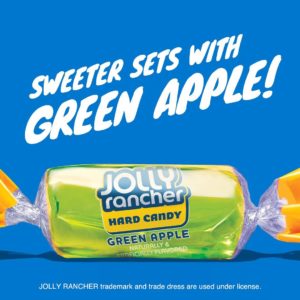 The sweet taste of gains!

Beyond Raw LIT: Satisfy your Sweet Tooth and Crush your Workout

With the new Jolly Rancher flavor licensing deal, Beyond Raw LIT gives you the best of both worlds — it satisfies your sweet craving and fires you up to conquer a big training session. PricePlow is glad to see that Beyond Raw is continuing to innovate and improve by partnering with cutting-edge ingredient suppliers, like Nutrition21, and Jolly Rancher, a popular brand completely outside of the sports nutrition industry. 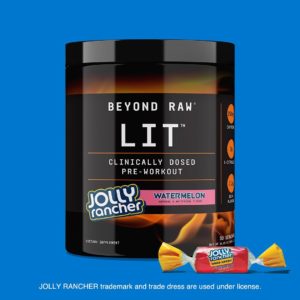 Relive your childhood with Beyond RAW LIT Jolly Rancher Watermelon!

Not only do these partnerships bring more legitimacy to the dietary supplement scene, but they also get more people excited about exercising and improving their health. Being able to drink a sugar-free, zero-calorie pre-workout with that tastes like a Jolly Rancher is much better than eating a bag of candy.

Beyond Raw also offers several other well-formulated sports performance supplements, such as Beyond Raw LIT AF, Precision BCAA, and a Beyond Raw LIT ready-to-drink. We would like to see Beyond Raw carry over the exclusive Jolly Rancher flavors to these products as well. GNC is also getting involved with licensed flavor collaborations. They recently partnered with Girl Scouts to create a line of products, including protein bars, protein powders, and ready-to-drink shakes, in flavors made popular by classic Girl Scout Cookies!

Make sure to subscribe below for more exclusive Beyond Raw and GNC news, reviews, interviews, and deals from PricePlow.