Ghost was started in 2016 by Dan Lourenco and Ryan Hughes. Ghost hit the ground running with numerous supplements that have stood the test of time, including Ghost Whey, Ghost Legend, and Ghost Amino. One of the first products that the company released in 2016 and that featured multiple licensed flavors was Ghost BCAA.

Throughout 2020, Ghost has been launching new products and flavors non-stop, including Gamer, Glow, Greens, and Ghost Whey Nutter Butter. But Dan and Ryan have also been working behind the scenes to make some of their existing supplements even better. The first one to get a refresh is Ghost BCAA.

During S6:E16 of “Building The Brand” on the Ghost YouTube channel, Dan and Ryan revealed the new formula for Ghost BCAA V2 and announced that it was going to be their largest flavor drop to date! 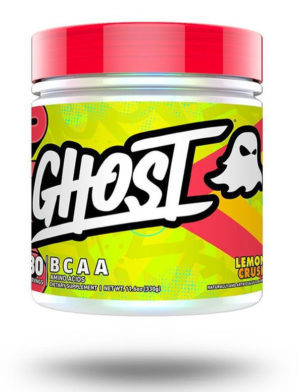 Lemon Crush is a never before seen flavor from Ghost!

They are going to be releasing Ghost BCAA V2 in six new flavors, including:

Previously, Ghost BCAA was only available in lemon-lime, kiwi strawberry, Swedish Fish, and Sour Patch Kids Watermelon. So these are some massive flavor upgrades for the Ghost BCAA lineup. In addition to the new flavors, Ghost has increased the amount of branched-chain amino acids (BCAAs) per serving, from 6 grams to 7 grams. The company is also using fermented amino acids, so Ghost BCAA V2 will be vegan-friendly!

You still get 30 servings per tub, but they’re lowering the price so you can save some cash! Ghost BCAA V2 also has 25 milligrams of AstraGin, a trademarked ingredient from NuLiv Science, to boost absorption. Ghost BCAA has been sold out for a while, but we’re glad that it’s making a comeback with a better formula, lower price, and more flavors than ever before!

Keep reading to learn more about Ghost BCAA V2 and subscribe to Ghost news and deal alerts so you don’t miss out on another new product or flavor drop! As always, you can use code PricePlow to save 20% on all Ghost supplements.

Normally amino acid supplements are taken pre-workout or intra-workout to activate muscle protein synthesis, thus preventing excessive muscle protein breakdown. However, since Ghost BCAA doesn’t contain any stimulants, you can enjoy it any time of day.

Ghost BCAA is sugar-free, only contains five calories, and tastes incredible, so it’s a great way to curb cravings, keep hydrated, and stay on track. Ghost recommends mixing one scoop with 8 to 12 ounces of cold water for a tasty and refreshing drink!

Here’s what one serving (~10g) of Ghost BCAA V2 contains: 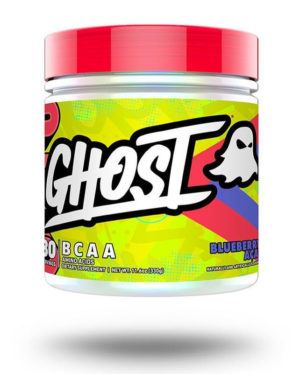 Blueberry Acai gets added to the Ghost BCAA lineup!

Ghost was the first sports nutrition brand to bring licensed flavors to the dietary supplement industry and Ghost BCAA was one of the first products to feature them. For Ghost BCAA V2, the company is bringing even more authentic flavor collaborations to the flavor menu with Sour Patch Kids Watermelon, Blue Raspberry, and Red Berry. Be on the lookout for more licensed flavors coming soon. 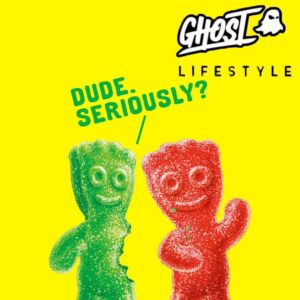 Here’s an updated list of all available flavors for Ghost BCAA V2:

Ghost: All Gas, No Brakes

Although 2020 has been a challenging year for the entire world, let alone the sports supplement industry, Ghost continues to move forward despite all of the obstacles thrown their way. In fact, this year could arguably be their best year yet, which is quite remarkable. As of writing this article in October, Ghost has already launched so many new flavors and products, it’s hard to keep track! 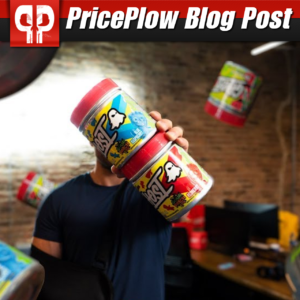 Some of their most notable releases include Ghost Gamer, Ghost Greens, Ghost Glow, Ghost Energy, Ghost Multi, Ghost Whey Nutter Butter, and Ghost Legend Bubblicious. Even though Ghost is consistently releasing new SKUs, we’re happy to see that they’re taking the time to make some of their existing supplements even better. Ghost BCAA V2 is just one product that they will be tweaking this year. Ghost has also been working on a new formula for Ghost Legend, their signature pre-workout. Moreover, Ghost has already rolled out new and improved labels for Ghost Whey.

If you know anything about Dan and Ryan, every tiny detail matters to them, and if there’s ever a way they can make a supplement better, whether it’s the formula, flavor, packaging, or price, they will take the time to do so. PricePlow has been working with Ghost for a few years now and one thing we always appreciate is how receptive they are to feedback—positive or negative. Ghost is going to continue to raise the bar each year and we’re glad to be a part of it!

Before you go, make sure to subscribe below for more Ghost news, reviews, interviews, and deals from PricePlow!