Along with a fantastic re-brand we’ve been covering here at PricePlow, Sparta Nutrition has recently introduced a stunning arsenal of new formulas and products. Among these new additions is Kraken Black, a pre-workout for all the stim freaks of the world… including us here at PricePlow. 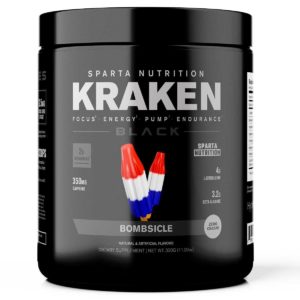 Need a bit more beta-2 bang for your dopamine receptors? Then Sparta Nutrition’s Kraken BLACK is where it’s at!

Will we take this beast or the “regular” Kraken? Read on, PricePlow Nation:

There is nothing wrong with a product that doesn’t seek to reinvent the wheel. Sometimes it’s better to take an old idea and polish it into something amazing. Kraken Black, at first glance, is a product trying to perfect the “EXTREME ENERGY” pre-workout niche, but without exotic stimulants like DM*A. Kraken has always been a bit lower in caffeine, and higher-energy versions of such pre workouts have been popular, so we’re not surprised that the superhot brand has thrown their hat into the higher-stim ring.

But we’ll need more than just some extra caffeine to be happy here! Thankfully those who like dopamine-boosting stimulants will get their money’s worth with this one.

As always, we attack the ingredient label, but first only after we check prices and let you sign up for Sparta Nutrition news and price alerts using PricePlow:

The ingredient doses listed below are both in one and two scoop doses on the label. Two scoops get you twenty servings in the tub.

Differences between Kraken and Kraken Black 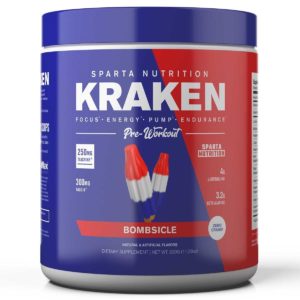 Compare to the original Sparta Kraken

So what does Kraken Black have that Kraken doesn’t? In the full two-scoop serving, here are the additions:

So basically, this is for those who love the beta-2 agonists, as that’s what’s getting chased here. A bit more pop and dopamine kick… but potentially more come-down since there’s no TeaCrine.

Meanwhile, you lose the Taurine, N-Acetyl-L-Tyrosine, Vaso-6, TeaCrine, Theobromine, and N-Methyl-Tyramine. The citrulline, beta alanine, and HydroMax are the same.

This is why Kraken Black is cheaper — it’s a bit less “well rounded.”

One good stack idea is to mix Kraken Black with the new Kraken Pump! 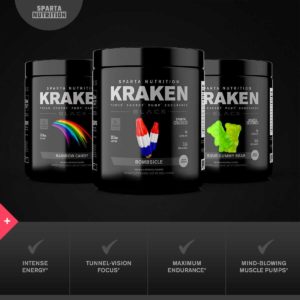 Kraken Black launched with three flavors. If they sell well enough, expect to see more (sign up for PricePlow’s alerts below!)

Sparta Nutrition has put a ton of resources into flavor matrixes… and it shows. Kraken Black comes in three different flavors as of this article’s publication: bombsicle, rainbow candy, and sour gummy bear. There’s really something for everyone here. We know, it’s a hard choice. Just go with your appetite.

I have access to rainbow candy and bombsicle, and rainbow candy is the clear winner, but it’s insanely sweet. So sweet that I downed itso quickly that the PEA slammed me FAST. It was pretty cool and I’m willing to bet was the intention of the product! Bombsicle is less sweet and a bit more gritty, so I’ll be using rainbow candy when I need to get smacked with the Kraken Black!

Honestly, our only complaints are minor. Our main concern is that Kraken Black may be too potent on the stimulant side of things… but that’s why it’s here! If you don’t want higher-stim stuff, go with the original Kraken pre workout!

Perhaps the addition of L-theanine could have smoothed out the energy for those prone to anxiety or jitters, but forget that — this is the beta-2 attacking, high-stim version!

Of course, we need to note that Kraken Black contains WADA-prohibited substances, so make sure you’re not drug-tested. Beyond these complaints, Kraken Black has us stunned. It’s a simple strike for the dopamine lovers, but the pumps aren’t that much less than Kraken… while the cost is less. If you’ve been looking for a non-“insane” but still high octane pre-workout, look no further.