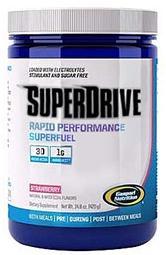 This year at the 2013 Arnold Sports Festival, Gaspari Nutrition had their latest and greatest pre workout supplement, SuperDrive, on display.

I started doing some research on the new ingredients so that I could get the product description listed up on our Gaspari SuperDrive page, and a few things seemed very off.

I’m a huge fan of Gaspari, and trust them with pre workouts. I still think SuperPump 250 was one of the best pre workouts ever. But I have to say, right now, I’m not sure what’s going on with this stuff.

So far, we’ve seen two different SuperDrive ingredient labels – one that was on display at the Arnold, and one that is displayed on Gaspari’s official website.

The second is the “official” one, but is downright impossible and clearly mislabeled, while the other screams pixie dusting (or more mislabeling). 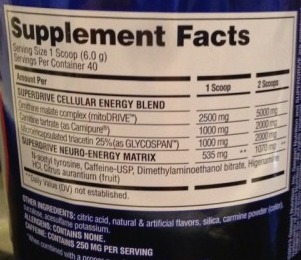 The SuperDrive Ingredients from the Tubs at the Arnold 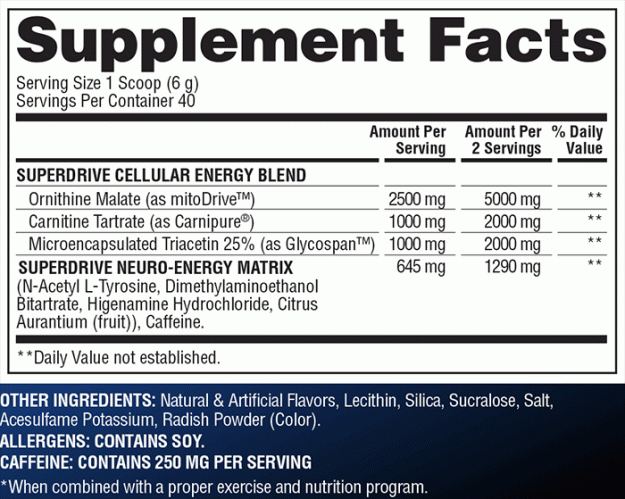 In both of these labels, we are going to assume that the label is stated in descending order by predominance of weight. That is, after all, the law (21 CFR 101.4(a)).[1]

What’s Wrong with the First One?

This first one might be for real, but if it is, then you have some serious pixie dusting going on here. Here’s why:

So, if this is the official label, and it’s not mislabeled, then that’s just questionable pixie-dusting practices from a company that doesn’t typically do that.

What’s Wrong with the Second Label?

Update: It turns out that this is the official label on their site, but this labeling cannot possibly be correct. Here’s why:

So, unless there was some new law of thermodynamics discovered over in Gaspari’s headquarters that I didn’t hear about… this label must be wrong.

For now, let’s disregard label #2, especially since nobody’s seen it in real life.

Do We Really need Half a Freakin Gram of Caffeine in a Day?

So let’s say the caffeine content on either of these labels is true. 250mg per scoop.

What I can’t get behind is how Gaspari lists the dosage amounts of taking two scoops, as if they’re “non-chalantly” allowing you to take 500mg of caffeine in one sitting!

The caffeine limits are discussed in our Caffeine Side Effects page… the most interesting study is the one showing that intake at a level up to 6mg per kg of bodyweight is safe. Anything beyond that can get a bit hairy.

So, by those standards, 500mg caffeine in 2 scoops of SuperDrive divided by 6mg/kg = 83kg safety per day. Converting to AMERICA, * 2.2lb/kg = 182lbs. Anyone under that size shouldn’t be taking this much in an entire day, and definitely not in one sitting and then going and hitting a hard workout.

I weigh 195lbs. Have I done over 500mg caffeine in a day? Occasionally, yes. Guilty as charged. But it was spaced out throughout the day, and I’d never just casually recommend anyone do it, especially as a big brand like Gaspari.

Have we gone too far? Is this really what the kids want? Do we really need this much caffeine? Or is this just a half-assed formula that doesn’t have much else?

When and where does this stop? Who’s first to have 500mg per scoop, and tell you to take 2 scoops in a day?

I know SuperPump MAX wasn’t “concentrated” enough for some people, and didn’t have enough caffeine. But the pendulum is swinging too far in the opposite direction. 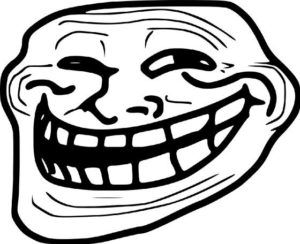 …Or Have I Just TOTALLY Been Trolled by Gaspari?

Or has Gaspari just trolled us all, so that people like me with nothing better to do start talking about their stuff and driving interest??

I am starting to believe that’s the case. I have been trolled. But either way, both of these labels seem wrong. Or, I at least hope they are.

What about the Other Ingredients?? Triacetin?

SuperDrive has a few other ingredients that honestly don’t have much research behind them – and definitely not for pre workout. You can see our Gaspari SuperDrive page to read the research. But the research is that… there’s not a lot of research on two of the main ingredients. That could mean just about anything.

One of them (triacetin) is used as a food and cosmetic additive, but the FDA approved it, and NASA checked it out in the 1960s to see if it could help with feeding during long flights. Interesting… but will it work in a pre workout? Is that for energy, or for pumps (it looks like a possible glycerin pre cursor)…?

Overall, I’m definitely willing to try this, especially to feel the triacetin, but at one heaping scoop max. If you need more than 300mg to get you going for a workout… it’s probably time for a good stim-break.

Anyway, for now, we await Team Gaspari’s response. We’ll keep these pages up to date, but you can also sign up for notifications below, and we’ll hit you up when we know more (or when the stores have it for sale).

Either label could make some decent sense if there’s really 125mg per scoop, and the 250mg caffeine warning at the bottom was meant to state two servings. Meh?

Click Here to Compare Prices on Gaspari SuperDrive with PricePlow.com!