Nutra Innovations Epitome Pre Workout Has it ALL… and then some 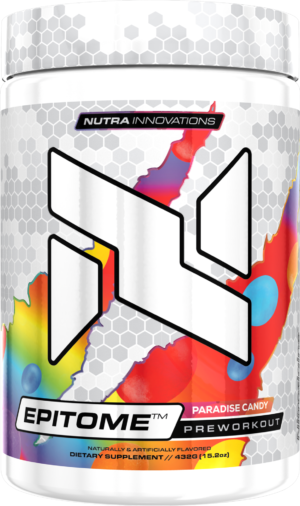 Wait until you see this label. With Greg Helton leading the charge at Nutra Innovations, there’s a brand to be very excited about. The Epitome pre workout brings both wild pumps and energy. Not for rookies here!!

You may have read that Greg Helton means business in 2021. As the new president of Nutra Innovations, he’s on a warpath to deliver well-formulated products to the gym-going masses. With over 10 years of industry experience under Greg’s belt, alone, customers can demand excellence.

As a powder-delivery product, Epitome has a mountain of competitors to conquer on its journey to being the “epitome” of the market.

High stim and high pump – can you handle both in Epitome?

But does the label match up to Nutra Innovations’ claims? Let’s see, but the long story short is that it does, so long as you can handle strong doses of stimulants like rauwolscine and a 400mg caffeine load in a full serving! Yet if you can handle that, you’ll be treated to massive clinical doses of ergogenic pump ingredients like Nitrosigine, citrulline, and betaine.

The full analysis is below, but before that, please see PricePlow’s coupon-powered prices, and if you like what you see, don’t forget to sign up for our Nutra Innovations alerts, as there’s more on the way with Helton at the helm! 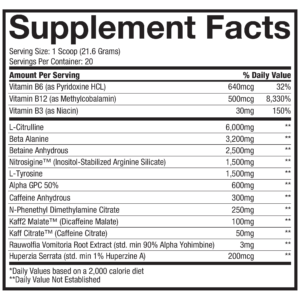 Can you handle 400mg total caffeine and a 2.7mg alpha yohimbine yield?! If so, you’ll be treated to some monster pumps. And if not, a half scoop still gets you some clinical doses!

A product with the name Epitome better have great flavors. Nutra Innovations chose Tahiti Sunrise and Paradise Candy as their initial flagship flavors, but more may come. Below is an up-to-date list of all of the flavors PricePlow has spotted, along with their coupon-backed prices:

As the product picks up speed, we’re excited to see what else Nutra Innovations will reveal.

Conclusion – The Epitome of an INTENSE Pre Workout

Epitome is a pre-workout that checks-off all the right boxes. And if you can handle each box, it may be exactly what you’ve been looking for.

It’s no secret that we’re big fans of pump ingredients like a full 1.5g dose of Nitrosigine and “over-dosed” 6g L-citrulline. But we’ve never seen it net to such an aggressive stim profile. Epitome fills that market gap, far more “pumpy” and ergogenic than the pre workouts we’ll generally see with such high alpha yo, DMPEA, and caffeine doses.

If you’re an athlete that loves Alpha-Y and a good helping of caffeine, but actually want pumps to go with them this time around, we suggest trying Epitome the next time you need a new pre-workout. Let us know what you think about the label below in our forum and on social media (@PricePlow).

But to us, Nutra Innovations Epitome corners the market that’s been asking for both aggressive stims and beyond-clinical pumps.