Note: This product has been reformulated for late 2019 / early 2020 and this article will be updated. 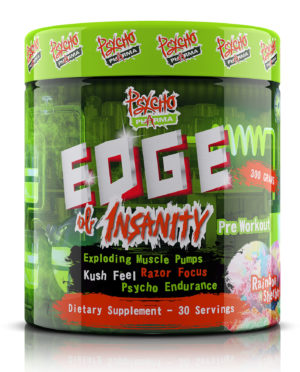 Edge of Insanity is a high stim, focus and energy boosting pre workout from Psycho Pharma looking to push your limits to the edge.

Over the past few months, we’ve been hearing incessant musing about a particular pre workout that brings an insane rush of energy and focus. One so potent it potentially rivals the top pre workouts with the “KING of stimulants” that were on the market.

The pre workout we’re talking about is none other than Edge of Insanity by Psycho Pharma. Well, we recently talked to the brand to find out a little more about this hard-hitting pre workout, and learned there’s actual a revised version that’s about to be released that’s potentially even harder hitting than the OG version.

You can read all about the revamped version of Edge of Insanity below, but before we get there, take a moment to check the best deal and sign up for alerts from PricePlow:

As we mentioned up top, Edge of Insanity has been reformulated. Gone from the new version are the stimulants N-methylpentyl-iminoglutaric acid (a.k.a. Panthergy) and Synephrine. In their place, you’ll find isopropylnorsynephrine, eria jarensis, and theophylline.

”Edge of insanity has been formulated to rival the effects of [previous banned stimulants]. I’ve personally guinea pigged and compared these many many times to arrive at this formula. 5 mg alpha Yohimbine is the only secret I’m releasing.

I dare others to use something this expensive and effective in their formulas.”

Edge of Insanity comes in three flavors including:

There was a heavy metal band from 1989-2003 founded by metal legend Dan Swanö named Edge of Sanity.

If you start following Psycho Pharma (just look at some of the other Psycho Pharma supplements!), you’ll notice a few other wildly named products, including some that seem to be metal inspired! \m/

The original Edge of Insanity was one of the most intense energy/focus pre workouts on the market, even including the ones with more intense (but off the market) stimulants. There’s been a few tweaks, but you can rest assured this is one pre workout that’s still going to deliver one hell of a boost in energy, motivation, and aggression in the gym.

Who’s ready to talk a walk on the Edge of Insanity?