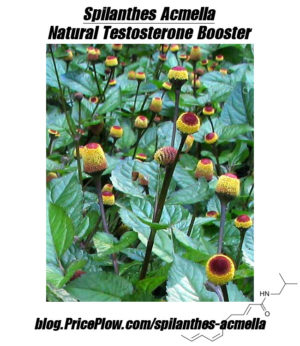 Spilanthes Acmella is a next-generation natural testosterone booster with a new extract named SA3X we’ve got to try!

Spilanthes Acmella is a food used throughout history as a medicine specifically for its pain relieving properties. It’s also known as the Toothache Plant, or Paracress, for its frequent use in helping relieve toothaches.

More poignant to this article, Spilanthes has also been touted as an incredibly potent natural aphrodisiac and testosterone booster.

In this article, we will analyze all of the known information on this herbal extract to see if it can really can live up any hype, as natural testosterone-boosting compounds are truly hard to come by.

We’ve got all the research and explanations ahead, so hold on tight and get ready meet the possible next-generation natural testosterone boosting herb!

What is Spilanthes Acmella?

Spilanthes acmella is the more common name for the plant Acmella oleracea, which belongs to the plant family of Asteraceae. Spilanthes has long and storied history of use in Ayurvedic medicine as both an analgesic and aphrodisiac.[1] Specifically, the leaves of the plant were eaten in the form of a salad to provide pain relief from severe toothaches as well as ward off other oral maladies.

Synonyms for spilanthes acmella include:

Other medicinal applications where Spilanthes has been used include: treatment of rheumatism and inflammation, tongue paralysis, stomatitis (inflamed and sore mouth), treatment for fever, sore throat, and even gum infections. To back this up, there is some research confirming Spilanthes does possess some mild anti-larvicidal and anti-malarial properties[2,3], but more on that later!

But the question here is, can it raise testosterone in healthy humans? We don’t fully know yet for humans, but the rat-based research looks very promising, and natural athletes should keep reading. 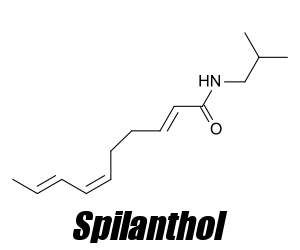 There are a few constituents in spilanthes that are suspected of its effects, but spilanthol here is the primary one.

The exact bioactive compounds in Spilanthes responsible for all its pain-relieving properties are still being sorted out, but researchers point to the N-Alkyl-amide class of molecules and Spilanthol in particular as being the primary bioactive compounds of the plant.[4,5]

One postulated mechanism for its action is that the spilanthol in Spilanthes Acmella was shown to inhibit 2E1 enzymes in human liver cells in vitro.[6] Studies showing inhibition of CYP2E1 (Cytochrome P450) may lower fat accumulation,[7] but this may also decrease the ability to process ethanol (alcohol),[8] so care must be taken when using such compounds.

We will continue to explore the mechanisms of action behind spilanthes, spilanthol, and the other n-alkylamides as new studies come out.

The current state of Spilanthes research can be described as “preliminary”, with no human trials conducted as of this writing. However, in animal studies (i.e. rats), the analgesic qualities are well documented, but do pale in comparison to conventional pharmaceutical drugs used for the same application. We’re not here for painkilling activity though, we’re looking at testosterone and luteinizing hormone:

Remember, hornier mice does NOT equal more testosterone – as we’ve learned with tribulus terrestris. But spilanthes acmella significantly boosted testosterone in the mice too. If it works for us, natural athletes are in for one fun run here.

If you’re one of those guys who’s not ready to fully dive into the more edgy pro hormone / anabolic side of test boosters, this may be a new “golden ticket” for a safe, all-natural testosterone increase.

Translating this to humans, the upper-end 150mg/kg dosages would translate to 1600mg/day for a 150lb male and 2200mg/day for a 200lb male — which isn’t an unheard of dose in a supplement.

However, we’re already hearing great things about 300mg/day ranges, and even moreso with 600mg/day, so that’s what we’re expecting to see in spilanthes-based testosterone boosting supplements until further notice.

We’re excited to see how this range performs, because 2200mg/day per the rat research would simply price everyone out of the market right now.

It’s important to remember that “more erections doesn’t equal more testosterone” (again, remember tribulus terrestris) – but there’s at least one extremely promising study here – it often takes time to find the ideal dosage in terms of both cost and effects.

What’s the best Spilanthes Acmella Ingredient on the Market?

Stiriti Ayur Therapies is the company with the IP and quality in their SA3X extract.

A trusted ingredient is finally back in the market: SA3X is a new trademarked proprietary spilanthes acmella extract from a company named Stiriti Ayur Therapies in India. SA3X will be standardized for high levels of spilanthol and other beneficial components from spilanthes.

SA3X is an extract whose spilanthes plants are grown free of pesticides. Stiriti’s facilities have been awarded with an Organic Certification for processing.

We asked if Stiriti Ayur Therapies would demonstrate the safety of their extract, and they provided us with one of their regular pesticide testing reports:

Further, Stiriti uses state-of-the-art analytical equipment such as HPLC, GC, and AAS testing machines. To the right, you can see an image of the HPLC machine used to verify the potency of SA3X. The HPLC test cannot be shared, however, since the peaks are a trade secret. 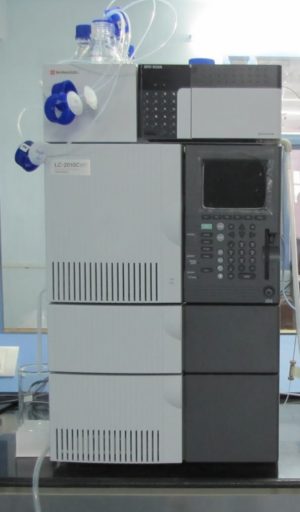 This is the HPLC machine that Stiriti Ayur Therapies is using to test their spilanthes extracts. Unfortunately, their HPLC peaks are their trade secret that we cannot see, so we’ll need to do a real review with blood tests to find out.

Finally, SA3X is gluten-free, NON-GMO, and organically-cultivated in Stiriti’s farms. By early 2017 it should also be certified Kosher and HALAL.

We increasingly enjoy learning where our supplements are made and manufactured. Stiriti is a custom botanical research and extraction company and all dealings with them have been professional, reliable, and credible. To read more about them, click here to download a presentation about the company and their GMP facility. Their website is StiritiVentures.com.

SpilanTEST has now been improved and perfected into today’s SA3X.

What are the best Spilanthes Acmella Test Boosting supplements?

Any Spilanthes Acmella Side Effects or Toxicity Concerns?

Toxicity is always a major concern when exploring new herbs. Luckily with Spilanthes, there were no toxic effects or other kinds of negative issues found in the studies so far.

This was based on a study that used ten times the above dosages! They still failed to yield problems with the mice.[9]

As for right now, we don’t believe that spilanthes will be so strong that it will throw your entire HPTA Axis (Hypothalamic-Pituitary-Testicular) so out of whack that you require a prescription-grade anti-estrogen.

Changes in estrogen are expected when there are changes in testosterone — that is fine — we just don’t expect them to move so much that you’d need pharmaceutical drugs to get them back to normal.

With that said, it will be important to follow they cycling instructions on your individual supplements. We’re expecting to see 8 weeks on, 4 weeks off, or something similar.

However, the biggest concern is that the ability to process alcohol could become impaired when using spilanthes, due to its potential inhibition of 2E1 enzymes in the liver. This is theoretical, but still worth cautioning: we highly recommend not consuming moderate (or greater) amounts of alcohol when on a spilanthes acmella based supplement cycle.

It goes without saying that any athlete looking to make gains should not consume much alcohol anyway, as it is detrimental to body composition goals.

Spilanthes Acmella has some promising potential backing it up as a safe and effective natural testosterone booster. However, before we’re completely sold on its benefits, we need to see more human evidence, but more importantly more product availability to give it a real shot. It looks like late 2016 / early 2017 is when the new phase of products will become a reality with the long-awaited SA3X.

If you’re one of those guys who’s not ready to fully dive into the more edgy pro hormone / anabolic side of test boosters, this may be a new “golden ticket” for a safe, all-natural testosterone increase. We may just need to put this to the test using the PricePlow blood testing program.

Since the first supplement with SA3X will be from Precision Research, you can sign up for their updates to get emailed when their spilanthes-based testosterone booster is out!