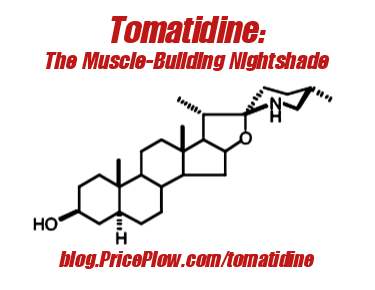 Tomatidine is the newest all-natural muscle builder to hit the scene that’s found in the common everyday tomato.[1]

Tomatoes are one of the most commonly-eaten foods around the world. Over time, scientists have discovered a multitude of natural compounds inside, nearly every one of them beneficial in some capacity.

Never did we imagine that one of these compounds inside would be anabolic, though, and could help build muscle. But that’s actually just the case given fascinating new research into a natural and healthy compound that athletes should get to know for 2017.

New research into this delicious nightshade has shown that it contains a powerful muscle-building called tomatidine, and the supplement industry is just starting to take note. Get ready, you’re going to be hearing about this one over the next couple of years.

Tomatidine, as you have correctly surmised, comes from the humble tomato plant. As you may also know, tomatoes are also replete with another popular, powerful compound: the antioxidant lycopene. 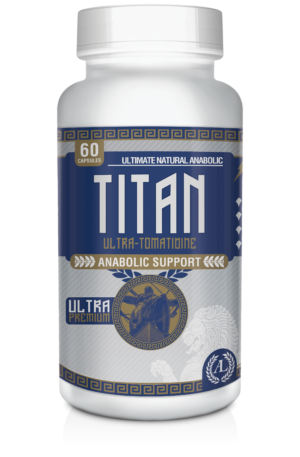 Titan (now discontinued) was the first supplement to contain tomatidine, and is made by the company that pioneered the Ultra-Tomatidine extract discussed below.

Lycopene is well-known and established as a workhorse that combats oxidative stress, limits the spread of free radicals and even helps fight off various types of cancer.[2,3] Tomatidine, on the other hand, is the newcomer to this scene, and the research is just starting to gain publicity for the many benefits it offers. Not least of all, on it’s muscle-building properties.

Tomatidine is classified as a steroidal alkaloid obtained from the hydrolysis of tomatine, along with 2 moles of D-glucose, 1-mole of D-xylose, and 1-mole of D-galactose.[4,5] Now, before we go any further, a “steroidal alkaloid” is not the same thing as a steroid like Tren, D-Bol, or any other those other banned substances you may think of when the word steroid is mentioned. Steroidal alkaloids are naturally-occurring sterols found in plants, animals, and fungus — the most famous being cholesterol.

A number of clinical trials have documented that not only is tomatidine healthy for you, it’s also amazingly effective at combatting muscular atrophy and weakness.[6,7] Even more importantly, the latest research on tomatidine shows it’s actually a great natural muscle builder!

More specifically tomatidine has been found to:

Let’s dive deeper, then come back to the real world to see how we can try this out without having to eat fifty tomatoes.

Suffice it to say this compound is incredibly noteworthy, and warrants much greater attention from supplement manufacturers, industry researchers, and advanced-level supplement consumers and athletes.

We’ve always been fans of tomatoes for their taste and antioxidant power, but now we’re realizing that if we can isolate this key ingredient from our beloved fruits, we can get anabolic perks as well! We look forward to more serious human-based research over the coming years, and will keep the above section up-to-date as it arrives.

What are the best Tomatidine muscle-building supplements?

The original supplement listed on this page has unfortunately been discontinued and there is no replacement as of 2020.

Tomatidine definitely isn’t the easiest ingredient to extract. You can’t just throw a bunch of tomatoes into a blender, hit the puree button, strain, encapsulate it, and call it a day — you need highly specialized equipment to standardize for the right alkaloids, and then you need the ability to test for them.

To really drive the point home, we’ve been told that companies working on tomatidine extracts “have burned through large truckloads of tomatoes in the process (I’m not kidding).”

What makes Ultra-Tomatidine the superior form of tomatidine?

Ultra-Tomatidine was the ingredient originally launched, and it used a new absorption strategy that you may not have encountered before in a supplement. It was a complex consisting of tomatidine and shilajit that provides 50mg tomatidine and 200mg shilajit per capsule.

We were wondering the same thing when we first encountered Ultra-Tomatidine, so we did some digging and found a wealth of information on this compound.

Effect of PS (purified shilajit) on testosterone and its mediators with respect to placebo control.[12]

There haven’t been any clinical trials conducted testing this tomatidine+shilajit combination, but based on its results with furosemide, we’re willing to bet it’ll do a fairly decent job when it comes to increasing tomatidine’s uptake.

Shilajit may also impart its own anabolic and pro-testosterone properties. Originally used in Ayurveda as a natural disease / illness fighter, more recent research on shilajit finds that it increases both testosterone secretion and stimulation.[12]

To put this in plain English, shilajit improves skeletal muscle’s pliability — and its ability to repair itself when subjected to stress or damage — as is in the case when resistance training.

Many of our readers are familiar with other systems to enhance bioavailability of supplements, such as adding black pepper extract or putting the ingredient into a liposome.

Before releasing Ultra-Tomatidine, its creators claimed to have carefully tested the ingredient in various cyclodextrin complexes, phospholipid complexes, and shilajit complexes.

In terms of dissolution, the cyclodextrin (HPBCD) and shilajit complexes were roughly equal — but the shilajit complex dissolved much more rapidly in water, which is a major plus. The use of shilajit also brings with it additional benefits, and it is more clearly DSHEA compliant. Shilajit isn’t cheap, but it was clearly the best choice for use with tomatidine.

The mechanism of complexation is not terribly straightforward. It involves a combination of hydrogen bonding, inclusion in humic acid cavities, and particle amorphization.

Antaeus Labs graciously provided these charts to alleviate any concerns over quality or extraction methodology. See the Ultra-Tomatidine chart: 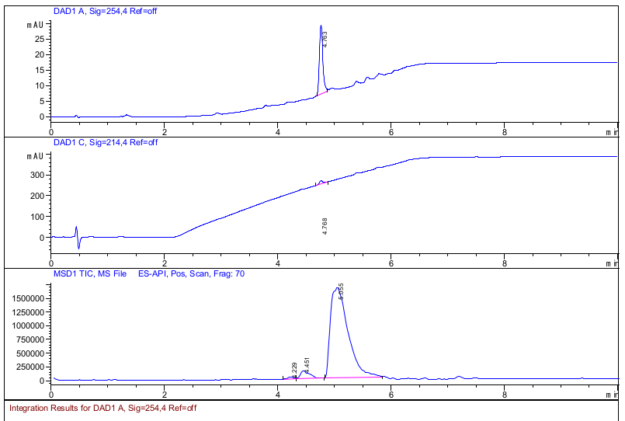 Here’s a close up look at the HPLC tests for Tomatidine supplied by Antaeus Labs.

There hasn’t been an “ideal” dose for tomatidine as of yet; however, research seems to indicate that splitting the dose across 1-4 servings / day provides for optimal absorption. Additionally, there does not seem to be a need for cycling as tomatidine does not operate any hormonal pathways.

Tomatidine Side Effects: Any Toxicity Concerns?

From the research performed to date, Tomatidine appears to pose no adverse effects when consumed in concentrated doses. Koh, et al. found that no unwarranted side effects when studying humans who consumed “indigenous variants of tomatoes with very high concentrations of α-tomatine (up to 0.05% (w/w) of dry tomato weight).”[14]

Cost is the biggest concern! 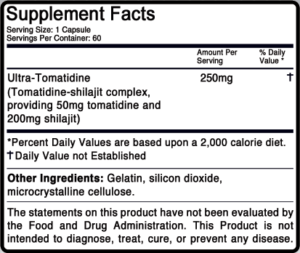 The biggest issue with these ingredients is that they’re expensive… are you going to take the plunge? We are!

The honest truth is that the biggest concern with these supplements are the cost. We hope that extraction methods get perfected over time, but for now, it’s not going to be cheap. PricePlow often has site-wide coupons, but even then this will be for those with a hefty experimental budget.

Could this be the next big thing? Honestly, we don’t know, but we’re natural athletes here and given that this one’s actually healthy, we’re going to jump in head first.

We love uncovering any new natural anabolic compounds, especially when there’s human trials backing their evidence. Tomatidine is the newest ingredient we’ve stumbled upon and can’t wait to see what future products it’s woven into.

Antaeus Labs kicked the doors down with epicatechin, and it turned out to be a greatly beneficial ingredient for all kinds of humans – not just athletes. With that on their track record, we sure aren’t going to bet against them.

Increased protein synthesis, muscle size, and performance coupled with reduced body fat levels? Sign us up for that any day of the week!

You will be seeing us review TITAN in early 2017, but it’s on sale now if you want to jump on it before we have.