On April 24, 2020, Ghost Lifestyle launched one of their most creative flavor collaborations to date – Ghost Legend Bubblicious Strawberry Splash. Dan Lourenco, Ryan Hughes, and the team at Ghost did what had been impossible up to that point – made a bubble gum supplement flavor that was both true to name and tasted great.

Prior to that Strawberry Splash launch, we had tried other bubble gum flavors, and some of them were true to the flavor, but they still weren’t good. It turns out that what was needed was a little help — in Ghost’s case, from their incredible strawberry flavor system. 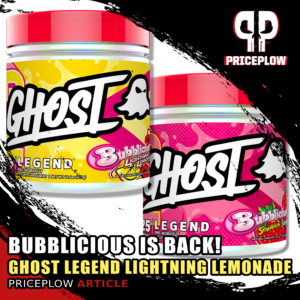 Bubblicious is back, and this time Ghost’s bringing Lightning Lemonade along with Strawberry Splash!

Well, the brand is back at it!

Not only are they re-launching that Bubblicious Strawberry Splash flavor in the new Ghost Legend v2 formula, they’re bringing another flavor to go along with it: Bubblicious Lightning Lemonade!

The 2020 Brand of the Year isn’t just making 2021 the “Year of the V2”, re-launching several supplements… they’re keeping the collabs coming too!

In this post, we’re going to review the formula and flavor so you can decide which flavor to get… if not both! But first, sign up for Ghost news and deal alerts so you don’t miss out on future product launches or sales!

Remember, this is a Ghost Legend V2 flavor, so the ingredients will be a bit different (and better) than the original Strawberry Splash collab, clocking in at 250mg natural caffeine per serving and 25 servings per tub:

You can read the details in our main Ghost Legend V2, but the reviews have been spectacular so far — with 1.5g Nitrosigine on top of the 4g L-citruline, you have two different clinically-dosed pump ingredients. Beta alanine is now at a clinical dose as well, but Senactiv is where we feel even more endurance!

And of course, the energy blend is now amplified with more caffeine (all naturally sourced), more theobromine, and more rauwolfia than the original.

A bit about Lightning Lemonade

Bubblicious was founded in 1977, releasing 28 flavors of bubble gum over the course of time (so far). The original Lightning Lemonade flavor was discontinued in the year 2000. However, it was re-introduced in 2005, but with a raspberry twist added to it.

Looking at the Lightning Lemonade Legend launch tub, we do see some raspberries in the imagery, so it’s likely a take on the second version, with no added gimmicks or “fakeness”.

You can watch the team run “Mailtime” without Dan and Ryan, opening up the Strawberry Splash Legend V2 tubs in Season 7 Episode 17 of their Building The Brand YouTube Series titled “2X the Bubblicious”:

If bubble gum flavors aren’t your thing, then fear not — Ghost has plenty of other incredible flavors to choose from in Legend: 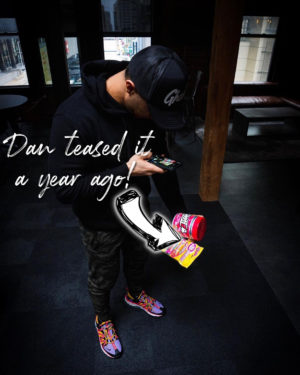 We didn’t know it at the time, but Ghost founder and CEO Dan Lourenco leaked the Lightning Lemonade flavor nearly a year ago!

At time of launch, Strawberry Splash will be available in retail (such as GNC), but the new Lightning Lemonade flavor will only be online through Ghost’s website (coupon code PRICEPLOW) and the Ghost Lifestyle App.

This adds to the growing list of flavor collaborations, alongside Sonic Cherry Limeade and Ocean Water, Welch’s Grape Juice, Swedish Fish, Sour Patch Kids, Warheads, Chips Ahoy!, and Nutter Butter. Each has their own unique flavor, but none of them have a citrus twist – until now.

The collabs just keep coming from Ghost, but they continue to be unique. Ghost Legend V2 has some incredible flavors, but it was in need of a little citrus for you citrus fans. It’s now here in the form of Bubblicious Lightning Lemonade. But we’ll be honest – Strawberry Splash is a knockout, and will be tough to beat.

The only way to find out which one’s best is to try for yourself, and for that, we have our PricePlow coupons and deals. Sign up so you don’t miss the next one: