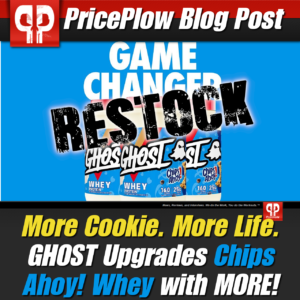 Re-Stock on October 17, 2019: This post has been updated to discuss the improvements in this flavor!

When Ghost originally launched their highly-acclaimed Chips Ahoy! collaboration, reviews were very mixed. While we loved it (video below), some did not. It turns out that some batches were simply better than others. 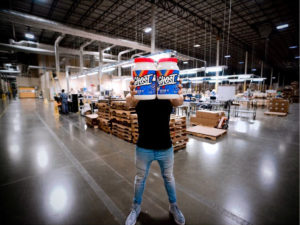 But to address the batch consistency, issue, Dan explained it in a few of Ghost’s legendary “Behind the Brand” episodes on YouTube, reminding you that you always add the “extras” last in a recipe. For instance, you add chocolate chips last to a chocolate chip cookie. You can see him discuss that in S5:E2 and in S5:E4.

When it comes to protein powder inclusions, you also want to add them in last. If you run them in a ribbon blender for too long, they’ll get broken down and you’ll end up with cookie flour.

Ghost has now perfected that process, thus giving you the powder shown in our second video review below.

With everything updated, Ghost has stepped up in a major way, and did what they do best – innovated in an open, honest, and fully-disclosed way.

“Greatest protein ever to hit the market. Hands down.” 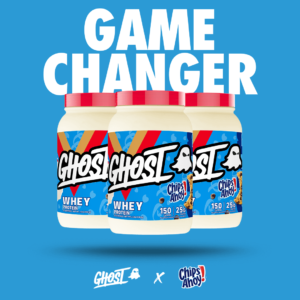 Greatest Protein Powder ever to hit the market? That’s what Ryan Hughes says. Let’s find out!

Dan Lourenço, Ghost’s other head legend, responded stating, “That’s a big claim.” To which Ryan responded, “I feel really confident in that claim.”

It’s all to be seen in Ghost’s latest Building The Brand episode — S4:E26 — which showcased the arrival of the legendary three-year process. That video’s embedded below, along with some extra information, but let’s cut you to the chase and get you in on the deal first:

As mentioned above, Ryan’s quote comes from Ghost’s YouTube channel, specifically Season 4 Episode 26, which published the day before Ghost Whey Chips Ahoy! launched (and a week after if was announced):

Unsurprisingly, Ghost has been working on this for three years, and finally got Nabisco to see the light — fitness folks miss our childhood “comfort foods” but prefer to avoid the addictive nature of a whole bag of them (usually… see below)! This is the perfect best-of-both-worlds for consumers and brands alike.

Circling the wagons: a serious treat for Ghost Legends

Apparently, Ryan’s been slowly hinting at the project in other videos throughout the years, which helps tie up a couple of loose ends for Ghost’s rabid followers. This “selling through storytelling” and transparency of behind-the-scenes footage is a major reason why Ghost is the lifestyle brand in the industry.

You also need to watch until the end, but if you can’t, here’s Dan’s hijinks that you’re missing out on: 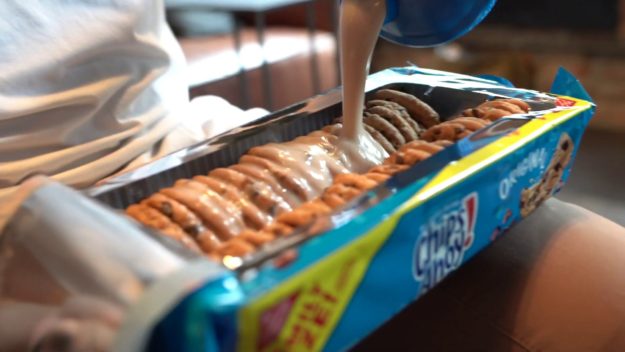 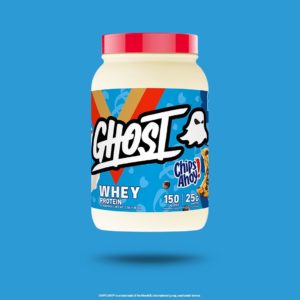 Below is a list of all Ghost Whey flavors that are currently in stock at GhostLifestyle.com or GNC (or any future trusted partners of Ghost):

Now let’s dig in to those ingredients:

The protein-based ingredients are the same as discussed in our main Ghost Whey article, where we’re getting 25g protein from the following non proprietary blend: 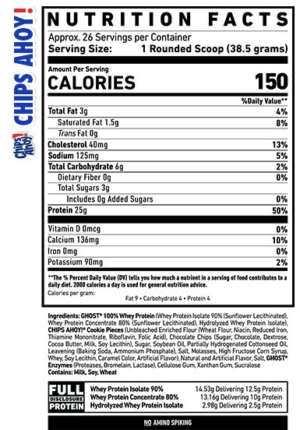 With real Chips Ahoy! Cookies inside, these macros are definitely worse than other Ghost Whey flavors… but according to Ryan, it’s also the best!

As for the rest, we know we’re getting real Chips Ahoy! Cookie bits from Nabisco — an official collab true and through. As Dan mentions in the video below that “it’s enough to get the taste, but not enough to throw off the macros”, which is a good thing since chocolate chip cookies with refined carbs and seed oils are what could be considered anti-superfoods. However, the macros are clearly a bit dirtier than other versions of Ghost Whey, yet far better than a pack of the cookies themselves! Worth the extra two or so carbs? That’s up to you!

Our take: if this is a way for you to get your cookie fix in without eating an actual stack of cookies, it’s a major win! With that said… wait until you see what Dan does at the end of this video.

For the sake of consistency, though, Mike is obviously not the biggest fan of seed oils or corn syrup and will consider this a special treat over a 2x/day kind of shake.

PS: It should also be noted that Ryan is better at NHL than Dan.