‘Merica Energy: The All-American Energy Drink Gets a ‘Restoration’

When a company drops monstrous cereal pieces and cookie bits into its whey protein (exactly what they did with Patriot’s Whey), you know you’ve found a larger than life company that embodies the good old fashioned ‘Merican spirit.

It was only a matter of time before ‘Merica Labz developed an energy drink, and on Memorial Day of 2018, they launched ‘Merica Energy with their famous Red, White, and Boom energy drink cans. Launched with delicious flavors and cartoon drawings of legendary American Presidents (in jacked form), “Boom Energy” was a massive success (just like nearly everything else founder and CEO Doug Miller touches). But a few years later, it was time for an update. 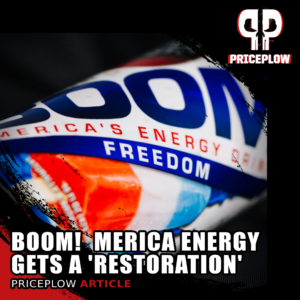 Merica Energy Red White and BOOM cans have been given a proper restoration, and they’re better than ever!

BOOM: The Red White and Boom Energy Drink Can Restoration

‘Merica Labz listened, and on the 4th of July in 2021, they delivered with a

The new Merica Energy cans have the same name, but with a bold BOOM across the front with their iconic logo and bold, red, white, and blue colors.

Below, we show our new review, explain the ingredients (200 milligrams caffeine per can), and embed Merica Labz’ epic launch video. Before that, make sure you see our deals and sign up for ‘Merica Energy news alerts, we hear there are more restorations coming:

Energy drinks have had a meteoric rise in in popularity, with numerous players are getting into the cold drink market. When ‘Merica Labz entered this market in 2018, they were a lesser-known underdog in the fight for fridge space. That gradually changed, as they became must-have drinks for both consumers and retailers — both in and out of the supplement industry.

It was modeled off of their patriotic Red, White, and Boom pre workout supplement, but with a different approach more true to energy drinks. ‘Merica Energy can be used pre workout, but it’s really meant for that “daily driver” energy drink feel.

However, ‘Merica Energy does steal a few notes from the pre workout supplement handbook, adding focus to the page.

Merica Energy took a modest approach with the caffeine, at 200 milligrams per BOOM can, which comes from two sources (caffeine anhydrous and guarana extract).

In addition, we have some helpful metabolism-supporting vitamins:

Finally, it all comes with a solid 184 milligrams potassium (5% DV) which shouldn’t be overlooked in an era where everything is loaded with sodium and we don’t always see enough of its K-counterpart.

In terms of sweetening, we have a combination of erythritol (~3 grams worth) as well as sucralose and acesulfame potassium (Ace-K).

Overall, we love this as an affordable energy drink formula that has a bit more – they’re trying to get the industry away from neon marketing and closed formulas, and are doing a great job at that.

Below is a list of all Merica Energy flavors. Those highlighted in yellow are the new ones in the 2021 restoration, but you may see some older flavors floating around out there as well.

The flavors are superb, but right now our favorite surprise is Victory (Cream Soda), which tastes halfway between a cream soda and a diet cream soda.. yet in energy drink form! Incredible job to team `Merica on these!

One thing we have to point out that we love is no artificial colors or dyes in any of the cans!! Since this is almost always drank from a can, why bother with them? Thankfully, ‘Merica Energy agrees.

This one is beyond words. This is how you publish a video on the 4th of July! 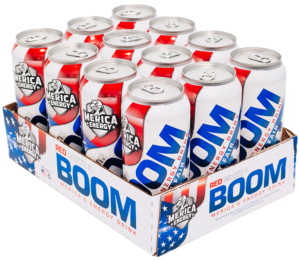 Grab a case and watch it disappear in less than two weeks!

The Restoration is upon us

‘Merica Energy indeed came out with a BOOM on Memorial Day 2018. But, as time passed, they wanted to clean it up a bit. The branding is just as patriotic as ever, but as the company has aged, so has the market. We like this serious side of `Merica Energy, yet will always remember to honor the historic Presidents on the original cans. 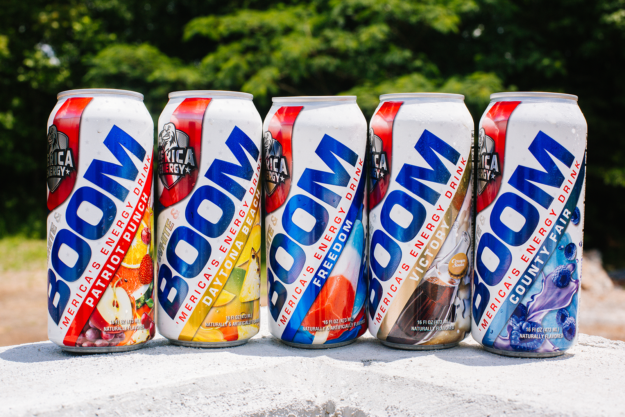