Are You a Monstar or on the Tune Squad? Ghost Legend X Space Jam is Here!

As one of the first movies ever shot in a virtual studio, it is argued that Space Jam altered the direction of cinematography, combining real-world elements with fictional virtual ones. 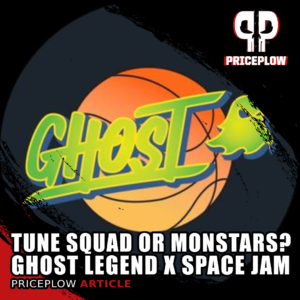 Decide once and for all if you’re with the Tune Squad or the Monstars in Ghost Legend’s Space Jam collab!

It can be similarly argued that Ghost Lifestyle, a supplement brand run by Dan Lourenco and Ryan Hughes, have taken over their corner of the world with a similar strategy, combining popular online personas and officially licensed flavors with well-formulated supplement collaborations.

Monstars vs. Tune Squad – which style Legend pre workout are you?

In Space Jam, the Jordan-led Tune Squad (with Bugs Bunny, Lola Bunny, and friends) play against the villainous Monstars. In these Ghost Legend collabs, we’ll see two different formulas that align with the teams’ personalities. The Monstars version deviates further from the original Legend pre workout, clocking in at 350 milligrams of caffeine (more than any other Ghost release to date) and far more. Tune Squad, however, keeps it lighter and fresher, replacing rauwolfia with NeuroFactor.

Are you a Monstar or on the Tune Squad? Below, we dig into the label differences to help guide you along, but first, check PricePlow’s coupon-powered prices.

Note: Due to its heavier formula, Monstars is available in 20 servings above while Tune Squad has 25 servings.

How Monstars and Tune Squad are different 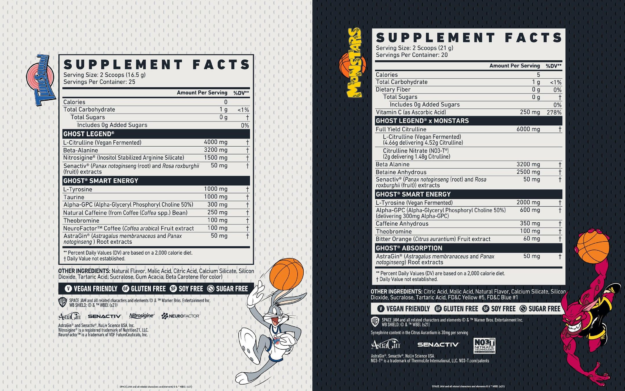 The Tune Squad (left) vs Monstars (right) Ingredients — which one are you?!

Both formulas have removed rauwolfia / alpha yohimbine, which has become a trend we’re seeing with the Ghost Legend collabs of recent.

In general, Monstars is a more aggressive formula, while Tune Squad is a more “feel-good” version of the original Legend.

Below, we dive into these differences, keying in on the bullet points above. If you’re completely new to these formulas, see our article titled Ghost Legend V2: New Formula and Flavors for Pre Workout Legends! Let’s start with Tune Squad.

As mentioned above, Tune Squad has one major change: replacing rauwolfia for NeuroFactor. While Rauwolfia, which provides rauwolscine (also known as alpha yohimbine) leads to intense energy, sometimes it’s a bit too intense for some users. NeuroFactor presents the opposite. 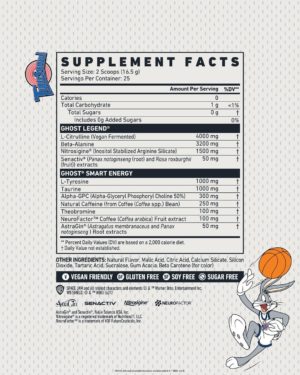 NeuroFactor is a trademarked Coffee arabica extract standardized from coffeeberry, and is often used to improve focus and cognition, although we anecdotally believe there are mild mood-enhancing effects as well.

It works by increasing levels of brain-derived neurotrophic factor (BDNF), which improves learning and memory faculty in the brain – researchers have seen improved cognitive function with higher levels of BDNF.[1] This serves as a neuroprotectant, as it helps with the promotion of neuron differentiation – higher levels of BDNF may be protective against neurotoxicity and various neurological disorders.[1,2]

On the other hand, lower levels of BDNF are associated with the risk of neurodegeneration,[2] something we wish to avoid by keeping BDNF levels higher. Research has shown that 100 milligrams of coffee fruit extract increases plasma BDNF levels by 143% compared to controls.[2]

Anecdotally, we consider NeuroFactor a feel-good focus ingredient, and those who dislike rauwolfia but like everything else in Ghost Legend – like the epic Nitrosigine-driven pumps – will see the pendulum swing back far in their direction with Tune Squad.

Ultimately, these ingredient variations are rather fitting for the Tune Squad and Monstars.

What are the flavors?

In terms of the flavors, you’ll notice that there’s nothing descriptive listed – and that’s for a reason. It’s meant to surprise you, since it’s not about the flavors for once.

The best we can say is that Tune Squad is an orange/citrus mix (comparable to Sunny D), while Monstar is very… green… if that means anything to you.

Below is everything PricePlow has seen regarding Ghost Legend: 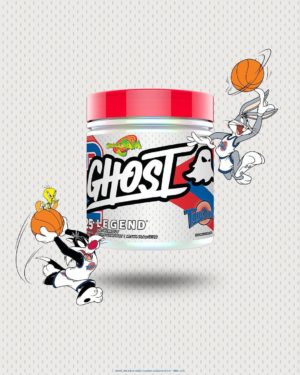 You know your branding & collab game is on the next level when you’ve got Bugs Bunny and friends involved!

Don’t miss the Ghost apparel for this one! 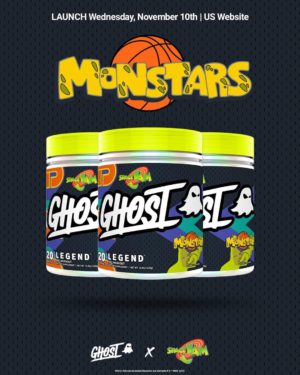 Did you know: Ghost created this Monstars logo!

We don’t normally cover apparel here (we’re all about formulas), but it’s worth noting that Ghost had to completely invent their own Monstars apparel, since none previously existed. In fact, Monstars didn’t even have a logo – so Ghost created one for them as well!

This means that the Ghost x Space Jam apparel is unlike anything you’ve ever seen – because it never existed before this collab!

Ghost took the entire supplement industry to new heights with their flavor collaborations, which started with WARHEADS, then led to “Project X” (Swedish Fish and Sour Patch Kids), and made it all the way to Chips Ahoy and even OREO. They caught the world off guard, and haven’t let anyone catch up since.

Throughout the process, they collaborated with athletes (and even athlete’s moms), making for one incredible, happy family.

2021 has been an insane year, with tons of “V2s” and more flavor collabs to come – sign up for alerts on our Ghost news page so you don’t miss a single one!

Now, it’s time for the next step – a collab that’s not driven by the athletes, candy, or food, but one driven by nostalgia… a different type of nostalgia. Depending on your age, Space Jam has been on the periphery of the social zeitgeist, combining real world with virtual elements. That’s a microcosm for where this world is heading — and Ghost has done the same with their lifestyle brand. Ahead of time and ahead of schedule, as always.

Note: Due to its heavier formula, Monstars is available in 20 servings above while Tune Squad has 25 servings.