Myprotein The Pre Workout Gets MIKE AND IKE Flavors!

In May of 2021, Myprotein announced a fantastic new collaborative flavor partnership: Mike and Ike Clear Whey Isolate flavors. They began with Strawberry and Screamin’ Sour Cherry, then recently launched an incredible Caribbean Punch and Sour Watermelon duo as well. In our original article linked above, we commented that this collab was way too good to limit to just protein, and that they should launch it in their pre workouts and aminos… 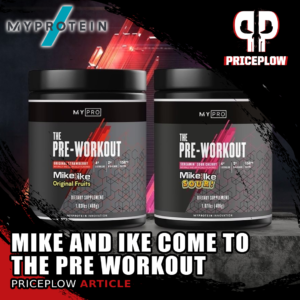 Asked and answered! When Myprotein began their collab with Mike and Ike candy, we said that they had to get it in their pre workouts. Half a year later… here we are!

Mike and Ike Come to The Pre Workout!

It looks like Myprotein listened, because Mike and Ike flavors are now available in The Pre Workout! Specifically, Strawberry and Screamin’ Sour Cherry can now be had in pre workout form, and they’ve got a unique texture twist that brings the Mike and Ike candy experience to pre workout form.

Note that this isn’t to be confused with Eddie Hall’s version of The Pre Workout, which we also recently covered (Myprotein’s been busy if you haven’t noticed). While Eddie, as the World’s Strongest Man, requires extra carbs and a bit more “oomph”, these new Mike and Ike flavors are for the original The Pre Workout, which brings efficacious doses at just 150 milligrams of caffeine, suitable for nearly anyone!

The specs are covered below, but first see our coupon-powered prices and list of The Pre Workout flavors available:

You can read our detailed ingredient analysis on The Pre Workout in our article titled Myprotein THE Pre-Workout: A Boost When You Need it Most. The key takeaway is that this is a lower-stimulant pre workout, coming in at just 150 milligrams of caffeine alongside 50 milligrams of theacrine, while much of the rest of the formula is strongly dosed. 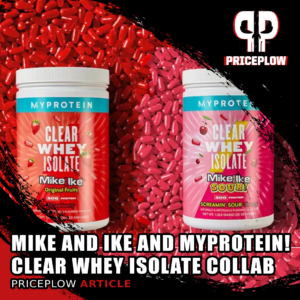 Mike and Ike and Myprotein! The industry’s latest flavor collab is for Myprotein’s Clear Whey Isolate, and we hope there’s a lot more coming!

Before getting into the label, there’s one key thing we want to point out, in case you didn’t see the video above: the mouthfeel is enhanced with pectin!

Pectin is a type of soluble fiber found in the cell walls of plants — it’s often used in jams and jelly as a gelling agent.[1,2] While there are some health benefits from using higher doses (it can help your gut generate healthy short-chain fatty acids[3]), it’s really here to provide that candy texture in a liquid product.

The end result is subtle but very nice — it’s not too gel-like, but definitely adds an experiential layer that we don’t normally get in pre workout supplements. Pre workouts generally range from chalky to thin liquid experiences, and these Mike and Ike flavors avoid that just a bit.

The full active and inactive ingredients in one image — note the added pectin in here!

Once again, you can see our original Myprotein The Pre Workout article.

All The Pre Workout Flavors

Not in the mood for candy? See the other flavors available, including that downright incredible Black Cherry Vanilla flavor, which is a PricePlow top flavor system: 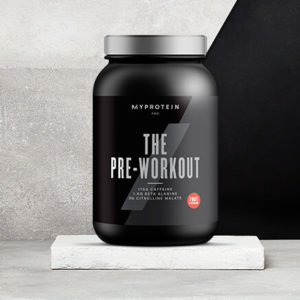 And of course, if you need carbs, you can always buy some actual Mike and Ikes, or take a look at Eddie Hall’s The Pre Workout to boost things even more… if it’s available, that is – the first run sold out fast. 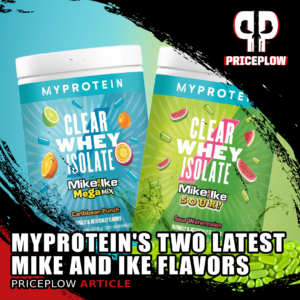 We asked, and we received! Myprotein’s Mike and Ike collaboration — especially the Strawberry flavor — was way too good to keep in the Clear Whey Isolate platform alone. If you’re a fan of standalone strawberry flavors, and don’t want too much caffeine, then you’re going to love this one.

Far too often, we get strawberry blended with other flavors (a la strawberry lemonade or strawberry mango), but for whatever reason, strawberry on its own isn’t as common in pre workouts. Thanks to the flavoring geniuses at Mike and Ike, our problems are now solved.

Next, will they bring that Mike and Ike Caribbean Punch flavor from Clear Whey Isolate over to a workout supplement as well? Because that one was top notch.