Update: Amino Synergy now has Peach Tea and Orange flavors! The Peach Tea is beyond good!!

Kris Gethin and Kaged Muscle have a fantastic line of supplements, but interestingly, they never put out a flavored amino acid supplement! Sure, you could mix their unflavored BCAA with their flavored HydraCharge electrolytes, but they probably could made a killing selling some BCAAs. Now we know why the wait: they wanted to do it right with a full-spectrum essential amino acid supplement… with optional energy!

The brand based upon Kris Gethin tries their best to do it right: Natural colors. Mostly stevia sweetened, with only a hint of sucralose. Caffeine from natural sources. Natural flavor systems, even if they’re more expensive. Ingredient profiles based on quality science. And their newest amino acid supplement is no different.

Diversifying in an expanding EAA market 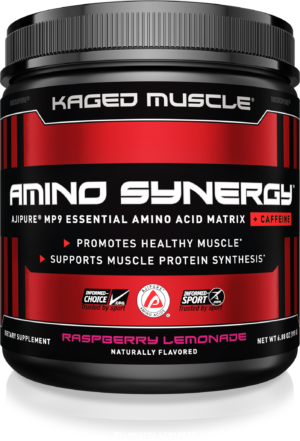 Kris Gethin’s Kaged Muscle has taken EAAs and put them into an energy amino supplement with (optional) natural caffeine!

Amino Synergy is one of several new essential amino acid (EAA) supplements that have hit the market in 2018. These products all share a goal: provide high-quality, full-spectrum amino acids to assist in sports recovery while also hydrating the athlete. However, the competition has been FIERCE this year, with the bar moving higher and higher.

Instead of following in line with the competition, Kaged Muscle took a bit from column A (the “energy amino” market that’s full of BCAAs with some caffeine) and a bit from column B (full-spectrum EAA supplements), and what they came up with is Amino Synergy.

Three options for all kinds of amino users

It’s important to note that Amino Synergy comes in three different forms. You can buy it in capsule form, a caffeine-free powder, or as a caffeine-fueled powder. The active ingredients across all three versions are nearly identical, which is something we’d love to see more of. Before we get into the ingredients, however, check the prices below with PricePlow and sign up for Kaged Muscle alerts because there’s a ton of stuff coming out in the next few weeks!

Never before have we seen someone make a full-spectrum EAA that’s sweetened mostly by stevia and still taste great!! Well done, Kaged Muscle:

If you opt for the traditional powdered experience of Amino Synergy, the only current flavor offering is raspberry lemonade. Do remember that methionine is hard to flavor when going in for your first sip of Amino Synergy, so we’ll see if they can beat expectations! 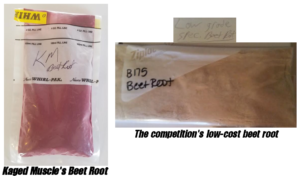 To make things even tougher, this is primarily stevia sweetened, with just a dash of sucralose to knock out the bitter stevia aftertaste. This is a Kaged Muscle specialty that’s done in other products such as Pre-Kaged (read the Pre-Kaged flavor system explanation), and it works extremely well at keeping the artificial sweetener doses uber low!

They did it with their MicroPure Whey Protein Isolate…

So we’re excited to see what Kaged Muscle can pull off flavor wise with such a methionine-heavy dose, especially when they’re attacking with the higher-stevia, lower-sucralose combo.

Given their history of amazing natural flavors (which they’ll tell you, are always far more expensive), we have the utmost faith. Especially since they knocked it out of the park with the cocoa flavor of MicroPure Whey Protein Isolate, which we think is the best chocolate-flavored isolate on the market yet!

…but you sacrifice on some aminos 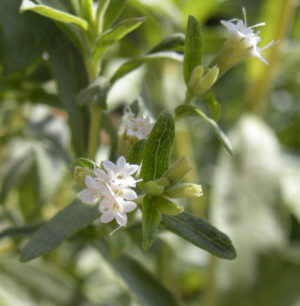 The issue with stevia-powered beverages are typically the bitter aftertaste. Kaged Muscle uses a large amount of natural flavoring, plus a dash of sucralose, to cover this up. Image courtesy Wikimedia.

The issue with a stevia-focused, naturally-flavored EAA blend is that it takes a lot of help to mask the EAAs. This means that only 3g of total EAAs are in here, which isn’t a huge dose. Decent for that in-between-meal energy pick-me-up or something that won’t utterly destroy your fast, but not a massive amount for those who need some serious protein help.

Another question we’ve asked Kaged Muscle is how they’re coming up with 30 calories in this label, which seems impossible if it’s 6.5g of total powder.

Overall, the trick to the trade is that you have to make a formula that’s just 55% active ingredients by weight. This is a similar story to Pre-Kaged, whose formulation and flavor system we discussed in the post linked above. This could be worth it to those who want only natural flavoring and as little sucralose as possible, the kind of person Kris Gethin and Kaged Muscle often try to target.

Our Interview with Kris Gethin

Amino Synergy very much falls in line with the general philosophy of Kaged Muscle as a brand. But don’t take our word for it, check out our extensive video interview with Mr. Kaged Muscle himself, Kris Gethin:

See PricePlow.com/kaged-muscle to save on Kaged Muscle Supplements!

We believe Kaged Muscle did their take on an EAA powder well. Our only complaint is that we want more of everything, but when you go after the natural flavors and caffeine sources, you end up paying. Some sodium may have been nice to flesh out the hydration-side of the product, but this is a minor complaint and it’s easy to get more salt in.

With Amino Synergy, Kaged Muscle didn’t reinvent the wheel, but they made a damn good one by combining two categories we absolutely love, and moving towards natural flavoring and sweetening, which we also love.

And look at that sexy label!